In 1992 I left my hometown in Indiana and moved 1500 miles away for a teaching job in the Rio Grande Valley (RGV) of South Texas. In doing so, I discovered a unique geographic and cultural region of the United States.

The RGV, informally called the Valley by locals, is located at the southern tip of Texas along the northern bank of the Rio Grande River, which marks the border between Texas and Mexico. It is not actually a valley, but a floodplain. Land developers in the early 20th century called the area “The Magic Valley” in an effort to promote the region to settlers and investors. Originally home to bands of Coahuiltecan Indians, the Spanish were the first Europeans to arrive in the area in approximately 1750. The area remained under Spanish control until 1836, when it became part of the new Republic of Texas—at least according to the Texans. 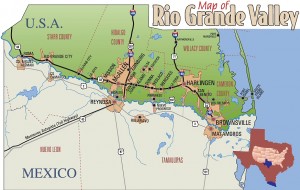 It took the Mexican-American War to definitively establish the Rio Grande River as the southern border of Texas. The arrival of major irrigation systems and the the railroad led to tremendous growth as the region developed into a major agricultural center.

Today the RGV continues to be one of the fastest growing areas of the United States, fueled by agriculture, tourism, and economic ties with Mexico and Latin America. Approximately 90% of the population is Latino. It is a land of extreme poverty and extreme wealth, of sleepy, peaceful small towns and regular gang violence, of deep cultural roots and constant change.

Historically there has been little representation of the Rio Grande Valley and its rich culture in children’s and young adult literature. This is slowly changing, and in this four-part blog series I will be highlighting a number of authors from the RGV who write about life in the Valley. I begin with Rene Saldaña, Jr., one of the most prolific Valley authors.

Saldaña’s first book, The Jumping Tree, was published in 2001. Set in Nuevo Peñitas, a small town close to the border where Saldaña himself grew up, this coming-of-age story features episodes from the life of teen Rey Casteñeda. In many ways, Rey and his family are representative of thousands of real-life Valley families: they are a tightly knit, Mexican-American working class family with relatives on both sides of the border. In the years since this book was published, tightened security and extreme violence in northern Mexico has limited regular travel across the border. However, many RGV families maintain strong connections with relatives in Mexico, just like Rey. In a region where ¾ of the population speaks Spanish at home another authentic aspect of this book is the way Saldaña incorporates frequent Spanish phrases.

Saldaña has written two other young adult novels, The Whole Sky Full of Stars (2007) and A Good Long Way (2010), both of which focus on growing up and on family and friend relationships. In A Good Long Way, the story of one character’s decision to drop out of school and leave home is told from three different perspectives. Many Valley teens will find connections with one or more of these characters: Beto, whose continual conflict with teachers and his father pushes him to leave home; his younger brother Roel, who both adores his older brother and is increasingly unhappy with his behavior; and Beto’s best friend Jessy, who hides an abusive family life under a tough girl façade. The Whole Sky Full of Stars features a Valley passion: boxing. When Barry’s family falls on hard times, his best friend Alby enters him into a prizefight as a way for them both to earn money. While the solution may be unusual, financial struggles are familiar to many Valley teens, since approximately 45% of Valley children live in poverty.

Over the next three weeks I’ll share other Valley authors who set their books in this unique geographical and cultural region.

One thought on “Story & Place: Discovering the Rio Grande Valley through Literature”