Last week at AILDI, the American Indian Languages Development Institute at the University of Arizona, Jon Proudstar gave a talk about infusing Indigenous language and culture into his comic books. Although I was unable to attend, I am happy to see Indigenous comics and graphic narratives being a part of the conversation at AILDI. 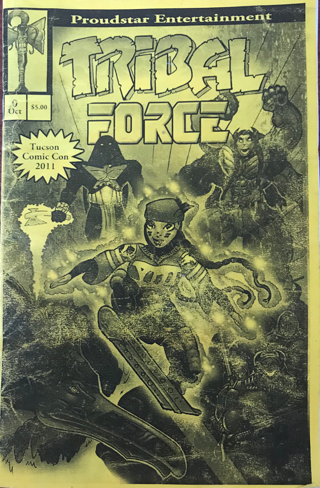 Many kids grow up loving comic books or at least loving the characters and stories that begin in comics and grow into a part of the popular imagination. Proudstar mentions in an NPR interview last year that the first time he saw a Native American character in a comic, it was Thunderbird in an X-Men story. When Thunderbird was killed off pretty quickly, Proudstar was determined to bring him back. He was part of the team with Ryan Huna Smith who created Tribal Force beginning in 1996.

When I picked up a photocopied, stapled copy at Tucson Comic Con in 2011 (see image above), I wished I could see the images in full color. Turns out, Proudstar hoped for the same thing. When Native Realities Press offered to re-release Tribal Force 20 years later our hopes were realized.

Native Realities Press is solely focused on Indigenous comics and graphic narratives, as well as prints and other merchandise created by Native artists, writers and game designers. The About Us statement on their website sums it up perfectly.

Featuring the incredible tales of Indigenous icons, First Nations freedom fighters, Aboriginal astronauts and Native American superheroes whose stories have long been coopted, unheard or ignored. We strive to give you the most original and authentic representations of Native and Indigenous peoples through stories and texts that educate and entertain children, youth and adults.

These incredible stories are a far cry from most images of Native people in comics until recently. The tracker guide, the sexualized Pocahontas, the superhuman fighter, the predator. The prevalence of these images impacts not only the identity and self-concept of young Native readers, but it affects non-Native readers’ concepts of Indigeneity. It shapes a massive and decidedly harmful cultural misunderstanding and collective ignorance.

Instead, artists like Arigon Starr, a Kickapoo tribal member, bring readers the anthology Tales of the Mighty Code Talkers. Contributors from multiple Native nations tell and illustrate stories of Native American Code talkers from WWI through the Korean war. Starr also brought readers Super Indian (“Once a rez boy, now a super hero”), a favorite of many Tohono O’odham students I have worked with. Bringing greater accuracy and authenticity to history texts, and greater representation to super hero comics, Starr also works on Native American theater. 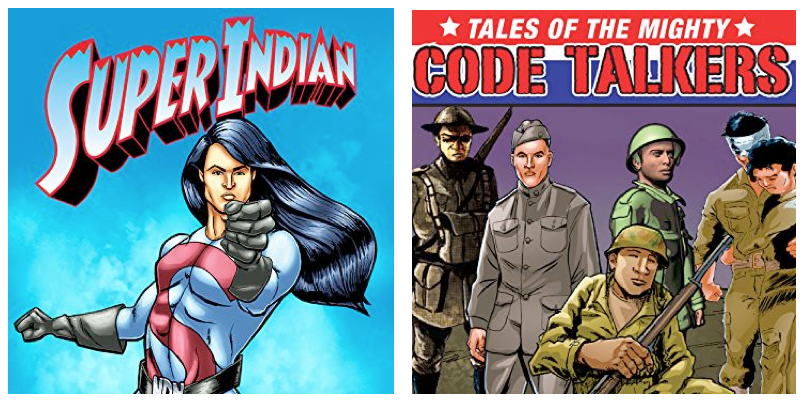 Jeffery Veregge is another artist to watch. A member of the Port Gamble S’Klallam Tribe in Washington State, Veregge has riffed off of popular culture in his artwork for years. Many of his works bring Coast Salish designs into well-known stories such as Star Wars as well as classic super hero characters such as Spiderman and Batman. Veregge helped revive the Marvel character Red Wolf, and the result is stunning.

Dale Ray DeForest, from the Navajo Nation, is another author and artist who parodies and interprets popular culture through a Native lens. His most recent work is a visually powerful interpretation of a traditional Pueblo story, The Hero Twins. DeForest began this project with Kickstarter and now has published The Hero Twins with Native Realities.

Elizabeth LaPensée is an Anishinaabe artist, author, and video game designer. Her work helps me understand the complex links between comics and games, and the way narrative works in different formats. Her most recent work, Deer Woman: An Anthology, also began with a Kickstarter campaign and was picked up by Native Realities Press.

Weshoyot Alvitre, along with LaPensée and others, is a contributor to the phenomenal collection Moonshot II: An Indigenous Comics Collection, the second volume of this highly praised anthology. Her work is fluid and I often watch the fluidity in action when she posts videos of drawing and inking her artworks onto Facebook.

These artists of comics and graphic narratives, and a growing number of other Indigenous artists, publishing houses, collectives, brick and mortar shops, and websites prove that there is intense interest in authenticity and ingenuity within Indigeneity. Lee Francis of Native Realities Press opened Red Planet Books and Comics in Albuquerque, New Mexico. Additionally, Francis began Indigenous Comic Con, now going into its third year.

With all of these resources for teachers, libraries and readers to find Indigenous comics, there is nothing stopping us from supporting Native authors, artists and, in Lee Francis’ coinage, Indiginerds.