As I began to write this post, President Trump returned from the Singapore summit with North Korean leader Kim Jong-un. The goal: a fragile peace. While I don’t work towards peace at that diplomatic level, my desire to foster world peace motivates what I do on a daily basis. My hope as an educator is to shape my students to be peace-seeking individuals. But fostering peace in the classroom or at home isn’t always easy because peace is abstract and difficult to describe; it’s hard to figure out how peace “happens.” It’s not passivity, ignoring conflict in the hopes that it will go away. And it’s not the opposite, digging in heels at all costs because we feel we’re right.

So what is peace? I went to an older book written and illustrated by Katherine Scholes and Robert Ingpen–Peace Begins With You. I used their description of peace as the organizing tool for this month’s posts. The questions I have explored are: What is peace? What does it feel like? What does it look like? How can I describe it through stories? I’ve explored one descriptor each week by looking at books that give a picture of what peace means for a young person.

The first descriptor of peace is having the things you need: water, food, shelter and safety. The United Nations considers these as rights for children. The following books explore the implications when those necessities are missing. 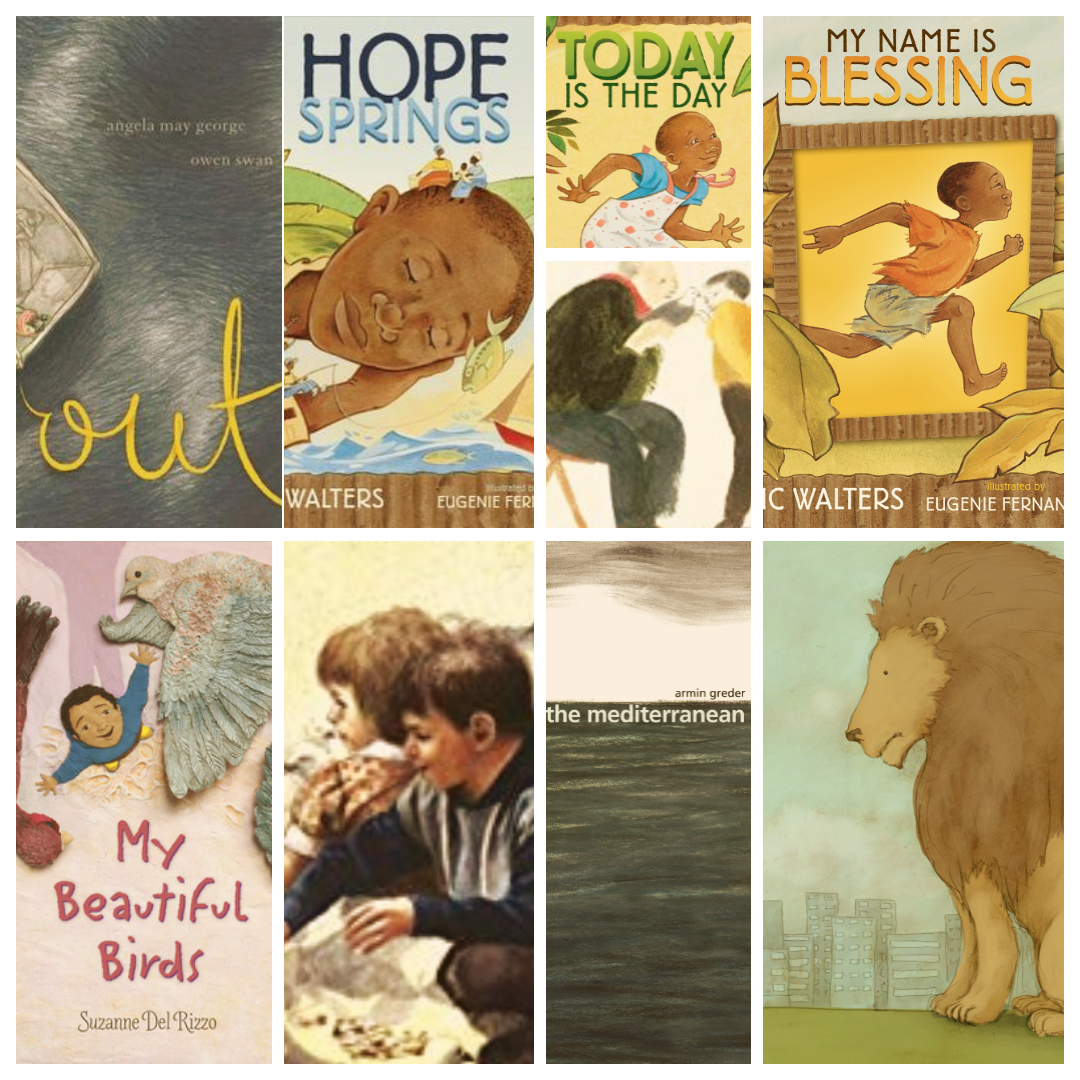 NUTRITION AND WATER
My Name Is Blessing by Eric Walters with illustrations by Eugenie Fernandes
Muthini is born with fingers missing. His mother names him ‘Suffering’ and leaves him with his grandmother Mumo (Grace) who is raising eight other grandchildren. Eventually she’s unable to feed them all and walks with Muthini to an orphanage. There, he’s accepted as a resident on the condition that he be renamed Baraka (Blessing) to reflect the change in his future. Baraka has the nutrition that supports his physical, emotional and intellectual development.

The end pages describe Creation of Hope, Eric Walter’s organization that supports orphans in residence or living with extended family. Blessing is based on the real Baraka and Grace, and the notes describe how Creation of Hope made learning and thriving possible for them. Grace now raises goats to supply nutrition and shelter for the grandchildren still under her care.

Walters has collaborated with Fernandes on two other books that describe the change in the future for orphans in Kenya. In Hope Springs, an orphan negotiates with a recalcitrant neighbor to bring well water to their community. In Today is the Day, orphans who don’t know their date of birth are given a birthday to celebrate each year. Both books address the physical or emotional needs of children that give them a sense of well-being and peace.

SAFETY AND SHELTER
The Mediterranean by Armin Greder
Armin Greder tells a circular story of refugees who don’t reach safety. The cycle begins as bodies drown and sink, fish eat the decomposing bodies, fishermen catch the fish, sell the fish, use the money to support unrest, which ultimately destroys villages, creating refugees who escape on a precarious boat that sinks in a storm. Like his award-winning book The Island, Greder doesn’t mince words or images to comment on the helplessness of people crowded onto fragile boats to escape violence, only to be turned away from other countries or find themselves at the mercy of the sea.

Walk With Me by Jairo Buitrago and Rafael Yockteng
A young girl walks across the city after she finishes her school day, picks up her baby brother, goes to the store that reluctantly extends them credit and then cooks dinner. Because of the dangerous conditions of the city, she imagines taking this daily journey in the company of an oversized lion with a huge mane. Together they maneuver the dangers, extract food from the stingy clerk and care for the family’s needs. The imagined lion gives strength and courage to the young girl as she faces the dangers of a violent city, a home life with an absent father and a mother working to keep the rest of the family safe.

A SENSE OF HOME AND FAMILY
King of the Sky by Nicola Davies with illustrations by Laura Carlin
In King of the Sky, a young Italian boy living in a British coal town is reminded of his home in Italy as he helps a retired coal miner with his racing pigeons. When the boy welcomes the long-distance flyer, who flew from Rome back to the UK, he realizes that his new home has similarities to his old home.

My Beautiful Birds by Suzanne Del Rizzo
My Beautiful Birds tells the story of a young Syrian boy who must leave his pet birds behind as is family flees violence. After a long time in a refugee camp he still has nightmares about the birds he left behind. But as he makes friends with new birds, his heart begins to feel more at home. Eventually he is able to share his joy interacting with birds with another young refugee who just arrived and who is mourning all she lost.

Out by Angela May George with illustrations by Owen Swan
The young narrator begins her story by stating two things: she feels different because people stare, and she is called an asylum seeker but that is not her name. She then describes her escape from violence, and living with her mother and their companions. But underneath her fragile happiness and sense of freedom is how much she misses her father. Then one day he arrives and the final spread shows them in each others’ arms. A yellow string appears in the images across the book, tying her homes together. It morphs from a hair ribbon to a fishing line that allows her to survive at sea, then to a cat’s cradle that distracts her while waiting on the boat and finally to a dancing ribbon showing her freedom. The final page does not need the yellow tie to her past because she is reunited with her Dad.

Across my life I have moved 26 times, including seven moves between countries. I know from personal experience how important it is to develop a sense of home in a new location, surrounded by family members who have been part of “home” in the past. I decided to include these stories because they address the emotional safety of feeling at home.

Next week we will look at texts that portray the idea that peace is being able to have, to hope for or work for at least some of the things you want.