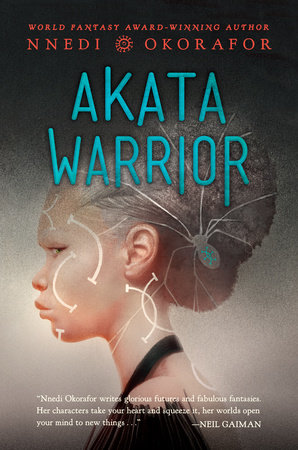 Akata Warrior is the continuation of Akata Witch and presents Sunny Nwazue’s adventures a year and a half later. She is now 13 ½ and must lead a dangerous mission to stop the apocalypse in her visions. The creature who is plotting the end of the world is Ekwensu, a masquerade of horrific power and determination. A masquerade is a creature in the Leopard world that can wreak havoc on those it chooses. Sunny is supported in this venture by her three friends, Orlu, Chichi, and Sasha, as well as her spirit face, Anyanwu. Her mentor, Sugar Cream, gives her a book, Fun Facts for Free Agents, which says that Leopard people are known by many names around the world for those with mystical abilities, but is derived from the West African Efik term ‘ekpe.’ Unlike other Leopard People, however, Sunny and her spirit face, Anyanwu, have been able to separate without causing Sunny’s death, thus giving them additional powers.

Sunny first encounters Ekwensu after she saves her older brother, Chukwu, from a gang at the University and is punished by the council at Leopard Knocks for revealing her Leopard self to the Lamb, Capo, of the gang. Lambs are the regular people who do not have Leopard powers. It is a serious offense to the Leopard community to reveal your identity, and so she is put in the basement of the Obi Library for three days, receiving food and water once daily. It is here she first encounters Ekwensu. After her three days, Sugar Cream explains to Sunny that she must travel by road to the town of Osisi with her friends. Chukwu agrees to drive them out of appreciation for what Sunny has done for him. The drive is fraught with dangers and once there, they will travel through worlds visible and invisible as they strive to save humanity.

In Akata Warrior, Okorafor masterfully reveals a deeper understanding of the relationships between and among the main characters who are dealing with issues faced by many teens and young adults–loyalty, romantic love, friendship, destiny, purpose, and intrigue. With the exception of Chukwu, these characters also hold magical powers.

While the sheer adventure is worth the read, the depth of the human endeavors provides a powerful and lasting experience. Other books to read with Akata Warrior could include The Book of Dust (2017) by Philip Pullman or Children of Blood and Bone (2018) by Tomi Adeyemi, both of which combine fantasy with realistic elements.

Okorafor, who is Nigerian-American, was born in Cincinnati, Ohio to Nigerian immigrant parents. She resides in Buffalo, New York where she is a professor of creative writing at SUNY-Buffalo. She writes African-based novels for both young adults and adults and has won several fantasy awards for her books, including the World Fantasy Award. More about her can be found at: www.nnedi.com