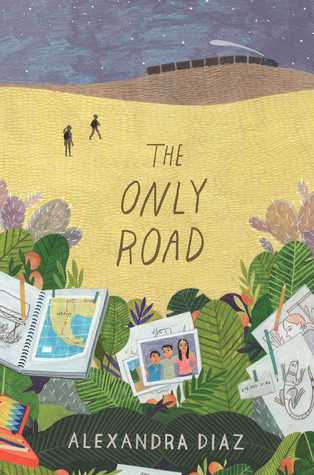 We’re sorry for your loss, as your brother’s death is our loss too. To make up for it, we’d like to extend our invitation to have you join us instead. We’ll give you six days to mourn your brother, then please report to Parque de San José before school. We’d like your help in delivering a gift to a friend. Your cousin can help too.

After Jamie and Ángela’s twelve-year-old cousin, Miguel, is brutally murdered by The Alphas, a dangerous gang that has taken over their small town, they receive this letter, telling them that after the six days they have to mourn their cousin, they must join in Miguel’s place. The tight-knit, extended family understands what this means–they join or they die–so they band together to get Jamie and Ángela out of their small Guatemalan town, even if that means a long and potentially extended time of separation. For the next few days, the family tries to stick to their routines and appear as normal as possible while preparing the cousins for their journey to El Norte. In the middle of the night, the pair flees knowing only a general plan, carrying a small amount of food, and hiding $2,000 each (scrounged together from family and close neighbors) sewn deceptively into their pants.

The Only Road follows this journey of the two unaccompanied minors (children and teenagers under the age of 18 who are traveling without an adult family member or guardian while trying to cross the U.S. border), trying to make the trek along the only road their families knew to send them. The pair flees from immigration police and gangs along the way, combat hunger and injuries, and face the cruel realities of traveling all alone in a country that does not want them. Through it all, they build friendships with other children and teens and learn to work together to survive, all the while becoming a close family through heartbreak.

Readers will empathize with the seemingly impossible decisions families are forced to make and see how treacherous the journey to El Norte is for many young people from Central America. In a time when immigration is a highly debated topic, readers will be able to connect with the difficult decisions the parents have to make, the challenges the protagonists face, and the uncertainty that awaits them upon reaching their final destination. As a high school teacher, I see many of my students in Jamie and Ángela and have built connections with them using this book. Teachers will be able to build closer relationships with their immigrant students, regardless of their status, and create an understanding of the lasting issues that may derive from making the trip as an unaccompanied child or teen. The overall message along with the highly effective figurative language allows for a realistic connection that both students and teachers can make, regardless of their preconceived thoughts and ideas regarding immigration.

Alexandra Diaz is the daughter of Cuban immigrants and lives in Santa Fe, New Mexico. She wrote Of All the Stupid Things, a YALSA Rainbow List and New Mexico Book Award finalist. A native Spanish speaker, she includes many Spanish phrases and words in her book, frequently moving between Spanish and English in to create a sense of authenticity. She teaches creative writing to teens and adults. If you loved The Only Road, other books you may be interested in are Somos Como Las Nubes/ We Are Like the Clouds (2016) by Jorge Argueta, Outcasts United (2009) by Warren St. John, and Enrique’s Journey (2006) by Sonia Nazario.

Mary Gilliland is an English teacher in North Texas who works with immigrant students in ESL classes, struggling readers in Reading Improvement, and special education and on-level students in English III. She graduated from the University of North Texas in 2013, and is currently working toward a Master’s degree in reading.