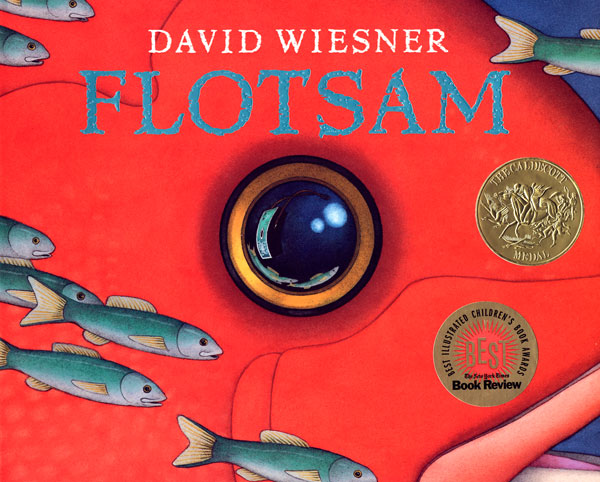 David Wiesner transports readers to new worlds and past times with his breathtaking illustrations in Flotsam. We are introduced to a young boy at the beach with his family. He explores the beach with the same curiosity and awe that characterizes people’s fascination with new and interesting things. He is inspecting all manner of wondrous things one can find at a beach, both alive and inanimate, when he finds an old fashioned, underwater camera with a roll of film. After getting the film developed, he is astonished at the photographs. They reveal an underwater world that can hardly be dreamed of: breathtaking underwater technologies, cities, lifestyles, and creatures that are familiar, unfamiliar, and out of this world. The last photograph is almost the most wondrous of all. He knows what he must do. He puts a new roll of film in the camera, takes a picture of himself holding the last photograph, and throws the camera back into the ocean so that it may continue to bring amazement to those who find it. Winner of a Caldecott Medal in 2007, this book is a stunning and flawless example of storytelling through visual images.

The Melville Underwater Camera, as shown in the book, appears to be a camera from the early 1900s based on the clothing worn by the people in the oldest of the photographs. The camera looks like the Brownie box camera created by Eastman Kodak. These cameras were inexpensive and readily available so that anyone could have a camera and enjoy personal photographs. The box camera had very few settings and was easy to operate. In Flotsam, the boy is able to take the film from the camera to a nearby developing service and get a new roll of film. Many of these cameras are still operated today since the rolls of film required are available. However, the Brownie box cameras were made out of cardboard and were by no means waterproof. The Melville Underwater Camera is a wonderfully fantastical object invented for this book to amaze the imagination of the reader.

There is something incredibly moving about seeing photographs whether they are personal photographs, another person’s photographs, or photographs of different areas and times of the world. Photographers allow the viewer to live vicariously through their own past lives or through the lives of others. There is a reason why photographs are considered their own art form. A photograph conveys the life and emotion of a thing or event that cannot be conveyed in the same way through words in a book. Flotsam, though a fantasy book, is a representation of how photographs can transport people across time and place. If “eyes are a window to the soul,” then what we see contributes to who we are. A camera is like an eye that can share what is seen with more than one person; so, to go along with the metaphor, we can look out from someone else’s soul. David Wiesner yoked our natural delight in connecting the ‘unattainable’ sights of photographs with our natural delight in the imagination to create Flotsam, a timeless piece of literature.

Many of David Wiesner’s other visual narratives make excellent book pairs including: Tuesday (1991), June 29, 1999 (1995), and Sector 7 (1999). Wiesner often employs the fantastical to drive the engaging plots of his books. Nonfiction books would pair well too, including: Otis and Will Discover the Deep: The Record-Setting Dive of the Bathysphere by Barb Rosenstock and illustrated by Katherine Roy (2018), Big Book of Sea Creatures by Minna Lacey and illustrated by Fabiano Fiorin (2012), Shark Lady: The True Story of How Eugenie Clark Became the Ocean’s Most Fearless Scientist by Jess Keating and illustrated by Marta Álvarez Miguéns (2017), Manfish: A Story of Jacques Cousteau by Eric Puybaret (2015), and Sea Creatures by Seymour Simon (2018). Other pairs might include: Deep Underwater by Irene Luxbacher (2018), Fish Girl by David Wiesner (2017), and Ocean Meets Sky by Terry and Eric Fan (2018).

David Wiesner grew up in New Jersey and always had a skill and interest in art. He went to Rhode Island School of Design to study art and visual storytelling. One of his jobs after college was designing illustrations for Cricket, a children’s magazine. He has also designed the cover art for novels. He travels to speak to students about art. He typically uses watercolors as the medium of his art. Many of his books use visual images without words. He has received a Caldecott Medal for Flotsam (2006), The Three Pigs (2001), and Tuesday (1991). He received Caldecott Honors for Mr. Wuffles! (2013), Sector 7 (1999), and Free Fall (1988).

WOW Review, Volume XII, Issue 4 by Worlds of Words is licensed under a Creative Commons Attribution-NonCommercial-ShareAlike 4.0 International License. Based on work by Madeline Brooks at https://wowlit.org/on-line-publications/review/volume-xii-issue-4/6/