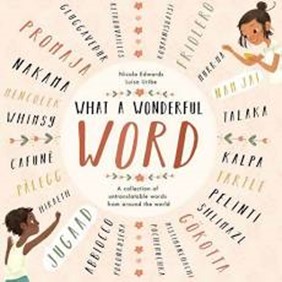 What a Wonderful Word: A Collection of Untranslatable Words from Around the World
Written by Nicola Edwards
Illustrated by Luisa Uribe
Kane Miller, 2018, 64 pp
ISBN: 978-1-61067-722-6

Have you ever heard the words “whimsy” or “gobbledygook”? If you are familiar with the English language, you probably have. These words are unique because they do not have a simple one word parallel when translated into other languages; they are “untranslatable”. Every language has rich words that sometimes take a lengthy explanation to be understood. This book explores and honors twenty-nine wonderful words from around the world. Paired with beautiful and transportive illustrations by Luisa Uribe, Edwards introduces the reader to untranslatable words from the national languages of countries such as Sweden, Japan, and Brazil and from languages of a specific region, culture, or group such as Yiddish, Sanskrit, and the endangered language of Wagiman. Along with a thorough definition of the word, Edwards gives interesting facts about the culture, creation of the word, and uses of the word to give the reader greater depth of understanding. This book is filled with beautiful words such as gökotta which is Swedish meaning “to wake up early in the morning so you can go outside to hear the first birds singing” and funny words such as verschlimmbesserung, a German word for “a supposed improvement that makes things worse”. These words can be strange and wonderful and many can be used in commonly shared situational applications across cultures.

According to Ethnologue there are over seven thousand languages spoken around the world which is more than 35 times as many countries that currently exist! There are 142 language families in which each family is a group of languages that share a similar ancestor that, for many possible reasons, grew and spread and eventually divided, each division creating a different language. French, Spanish, Italian, and Portuguese grew from the Latin language which itself branched from another language. Languages within a language family may have many similarities but also possess a distinct richness apart from another. An untranslatable word is one that has no parallel in another language. “Sun” in English has a single word counterpart in almost all languages, but an untranslatable word very likely does not.

This book may be filled with words that are unique to a certain culture and language but most of the words amaze the reader with the way that they transcend cultures with their applicability. For example, who cannot relate to the amusing Buli word pelinti, meaning “to move food that is too hot around your mouth as you wait for it to cool down” (p. 51)? As a person who lives in a climate that gets a cold season, I certainly understand the Icelandic concept gluggavedur which means “weather that looks beautiful while you’re inside, but is much too cold when you step outside” (p. 11). Every word in this book made me smile. I loved the words highlighted in this book and wish I could use them, or an English equivalent, in my everyday speech.

What a Wonderful Word has two obvious and rich themes: language and culture. One book that would pair well with the theme of language is Frindle (Andrew Clements, 1998) which is a chapter book that discusses the process of creating new words in a playful context. Du Iz Tak? (Carson Ellis, 2016) is a picture book in a gibberish language meant to exemplify how the reader can interpret an unknown language using the repetition of words and phrases, laws of semantics, and contextual and visual clues. Drawn Together (Minh Le and Dan Santat, 2018) is a book about bridging languages to form relationships without words.

Books that highlight diversity would also pair well. A wonderful book with the same theme of diverse cultures is People by Peter Spier (1980) which looks at people and their cultures across the world. If You Lived Here: Houses of the World by Giles Laroche (2011) takes the reader on a tour of different houses around the world and provides interesting information about differences in architecture which reflect the culture’s needs. This Is How We Do It: One Day in the Lives of Seven Kids from Around the World by Matt Lamothe (2017) shows the similarities and differences of children worldwide. Children’s Illustrated Atlas (DK & the Smithsonian Institution, 2016) and introduces children to using an atlas as a resource, giving them rich details of maps, countries, environments, and cultures.

WOW Review, Volume XIII, Issue 2 by World of Words is licensed under a Creative Commons Attribution-NonCommercial-ShareAlike 4.0 International License. Based on work by Madeline Brooks at https://wowlit.org/on-line-publications/review/volume-xiii-issue-2/10/.