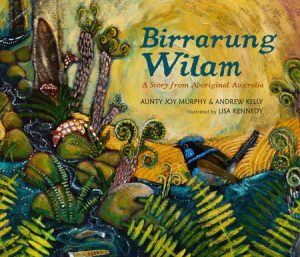 In this lush written and visual narrative, readers travel along the Yarra River (Birrarung) in south-eastern Australia, and discover many creatures who consider the river wilam (home). The narrative begins in the mountains, when rain falls on the earth and begins to trickle into streams. As the streams travel down through the mountains and onto the plains, readers are introduced to Australian wildlife as they interact with the river. For example, cockatoos fly along the river looking for seed-laden pinecones where the river has been dammed; kangaroos rest on their short forepaws to eat the river grass. The river is a refrain that runs through each page, both in the words (Birrarung) and the images, turning this informational book into a lyrical story.

The insertion of words from the Woiwurrung language slows the reader down. Clues to the meanings exist in the images, and the English equivalent is frequently given on the following page:

While comprehension of the narrative requires close attention to images and patience looking for clues, the experience of reading and understanding is rewarding. The words in the Woiwurrung language are all nouns so the illustrations give specific clues and invite readers to look closely. If baffled, the glossary at the back of the book is organized by thumbnail-sized reproductions of each double-paged spread, with the needed translation under each illustration. Many bilingual books insert words from another language into the narrative, but this book is unique because of the quantity of Woiwurrung words inserted into the text.

The images are stunning. Rendered in acrylics, aboriginal illustrator Lisa Kennedy incorporates facts about river life in a way that turns the informational book into a story. Aboriginal motifs in the images add beauty and mystery to river life along the way.

This book is unique in the way it creates a visual feast describing a river habitat. So, books that describe river habitats would be a natural pairing. The Yarra has changed with the arrival of settlers from Europe, so Letting Swift River Go (Jane Yolen & Barbara Cooney, 1995) would let readers experience the impact of civilization on a river, particularly that of building dams.

This book would also pair well with other bilingual texts that include words from languages that are not a part of the Romance or Anglo-Saxon linguistic family. For example, in The Pencil, authors Susan Avingaq, Maren Vsetula, and Charlene Chua (2018) intersperse words in Inuktitut as they tell a story of a family using their mother’s precious resources of pencil and paper while waiting for her to return.

Aunty Jo Murphy (Joy Murphy) is an aboriginal writer, storyteller, advocate, and elder of the Wurundjeri people. “She is passionate about using stories to bring people together and as a conduit for understanding Aboriginal culture” (jacket flap). She collaborated on another title with Lisa Kennedy, Welcome to Country: A Traditional Aboriginal Ceremony (2018) that welcomes visitors to the Wurundjeri land. She was made an Officer of the Order of Australia for her service in social justice issues such as land rights and equal opportunity. She uses her art as a tool for reconciliation. She lives in Wurundjeri land in the state of Victoria.

Andrew Kelly is the Yarra Riverkeeper and lives close to the Yarra in Melbourne, Australia. He is a member of the Waterkeeper Alliance, a global organization focused on environmental stewardship and water quality protection on a global scale. He has written other titles for adults and children.

Lisa Kennedy is a Trawlwoolway storyteller and artist from Tasmania, and lives in Victoria, Australia. She has collaborated with elders on several picture books including Welcome to Country: A Traditional Aboriginal Ceremony (Aunty Jo Murphy, 2018), Respect with Boonwurrung Elder Aunty Fay Stuart Muir (2020), and is currently working on Sea Country with Palawa Elder Aunty Patsy Cameron.

WOW Review, Volume XIII, Issue 2 by World of Words is licensed under a Creative Commons Attribution-NonCommercial-ShareAlike 4.0 International License. Based on work by Susan Corapi at https://wowlit.org/on-line-publications/review/volume-xiii-issue-2/3/.