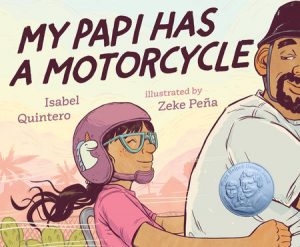 This everyday slice-of-life story celebrates a young girl’s tender relationship with her father and the vibrancy of her Mexican American community. Each evening when her Papi returns from a long day of work, Daisy greets him with hugs and anticipation. He helps her snap on her unicorn helmet and off they roar on Papi’s motorcycle. Vrooooomm! Written from Daisy’s point of view, readers are carried along as daughter, father, and motorcycle “become a spectacular celestial thing soaring on asphalt”. Their joy-filled ride takes them through a lively Mexican American neighborhood abounding with taquerías, churches, murals, family, friends, and stray cats. Each building connects with a piece of Daisy’s life and cultural heritage—the market where Mami buys gummy bears, the murals that speak to justice for migrant labor, and grandmother’s kitchen where the food always tastes better.

Family and friends in Daisy’s neighborhood smile and nod in recognition of one another as Papi’s motorcycle makes the rounds. Readers will delight in the bond between daughter and father and the comfort and support they give and receive in their close-knit community. Thanks to the illustrations, they will also want to don a helmet and jump on the back of a motorcycle!

Working in harmony, both the words and the artwork offer readers a rich sensory experience—bells ringing, children laughing, taste-filled memories of raspados (syrup-sweetened shaved ice), Abuelita’s albóndigas (meatball and rice soup), and conchas (seashell-shaped pastries). As Daisy notes, “No matter how far I go from this place, or how much it changes, this city will always be with me”. From the cover to the end papers, Zeke Peña’s illustrations capture the movement and pure joy of the ride. The comic touches in familiar cartoon onomatopoeia and the speech balloons that convey snippets of conversation among community members add to the lighthearted tone of the book.

Mi papi tiene una moto and My Papi Has a Motorcycle has earned numerous awards including a Pura Belpré Illustration Honor Award and a 2020 Tomás Rivera Mexican American Children’s Book Award; it was also listed as a School Library Journal and a New York Times Best Children’s Book of 2019.

Instead of a bilingual text, the publisher Kokila, an imprint of Penguin Books, offers this story in two separate editions—one in Spanish, one in English. The book was originally written in English. The translation in the Spanish language edition is faithful to the energy and sentiments expressed in the original. The Latin American Spanish vocabulary utilized by the Colombian translator Andrea Montejo more accurately reflects the Mexican American culture portrayed in this story than had the translator been from Spain.

The question as to whether a book should include both English and Spanish language in the same edition is complicated. Economically, schools’ and libraries’ limited budgets benefit by getting two books for the price of one. Also, in the classroom, it is more convenient for educators to have both languages easily accessible in one book. However, having the Spanish language text separate in its own book emphasizes the importance of the language both commercially and educationally—Spanish then becomes a language worthy of existing as a sole means of communication, rather than as an appendage to English. For readers, the decision to publish in two separate editions honors and elevates the Spanish language and provides Spanish-speaking young readers and families with an unadulterated cultural experience. (We would like to see this become a trend.) The English version of the book includes Spanish language words in several speech balloons—words that reinforce the Mexican American cultural setting of the story.

Mi papi tiene una moto/My Papi Has a Motorcycle can be paired with other daily life stories of children, families, and neighborhoods. These Spanish and English books with single language editions will pair well: Última parada de la calle market and Last Stop on Market Street by Matt de la Peña and Christian Robinson (2015); Mango, Abuela y yo and Mango, Abuela and Me by Meg Medina and Angela Dominguez (2015); and Por todo nuestro alrededor and All Around Us by Xelena González and Adriana M. Garcia (2019). For an English/Spanish bilingual book pairing consider Tata’s Remedies/Los remedios de mi tata by Roni Capin Rivera-Ashford and illustrated by Antonio Castro (2015).

As her Amazon biography states, author Isabel Quintero lives and writes in the “Inland Empire of Southern California, where she was born and raised”. In her author’s note for this book, Quintero states the experiences she shares in Mi papi tiene una moto come from her own childhood memories of riding with her father and honor her Mexican American cultural heritage. She calls this book a love letter to her father and to Corona, California. To learn more about Isabel Quintero, visit her website.

Zeke Peña is a cartoonist and storyteller from El Paso, Texas. He has collaborated with Isabel Quintero on two other books, Gabi, A Girl in Pieces (2014) and Photographic: The Life of Graciela Iturbide (2018). To learn more about illustrator Zeke Peña and see more of his work, visit his website.

WOW Review, Volume XIII, Issue 2 by World of Words is licensed under a Creative Commons Attribution-NonCommercial-ShareAlike 4.0 International License. Based on work by Mary Margaret Mercado and Judi Moreillon at https://wowlit.org/on-line-publications/review/volume-xiii-issue-2/7/.