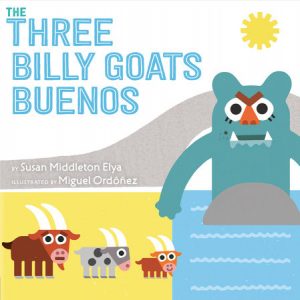 “How many creatures can pass me? ¡Ningunos!
You kids will be part of mis desayunos!”

Three little goats need to get across a rapidly running river only to discover that a grumpy gigante lives under the bridge and she is not letting anyone pass! But the three cabritos are not so easily dissuaded. They hatch a plan to get by “the grumpiest troll in the land!” The smallest goat starts across and is confronted by the gigante, who threatens to eat the littlest goat for lunch. Explaining that the older brother would be much more delicioso, the troll lets the smaller brother pass. When the second goat approaches, readers have a sense of what will happen. But what about the third goat? How does the oldest brother get by the grumpy troll?

A bilingual remix of the classic tale of Three Billy Goats Gruff, The Three Billy Goats Bueno gives readers another way to think about the tale. With the clever use of both Spanish and English, readers will be charmed by the rhythmic retelling that comes with a modern twist. Bright, almost geometric illustrations in pencil, collage, and digital media expand the story and carry readers along on the cabritos mission of not only crossing the river, but of discovering the reason for the troll’s grumpiness. The glossary in the front of the book addresses the use of Spanish vocabulary and word meaning, but it is the use of the language in context that creates such a delightful wordplay.

It is not only the wordplay that makes this book enchanting, however. It is the message contained within the story that allows for deeper thought and meaning making. By wondering why the troll is so grumpy, the older billy goat takes the story in another direction. The mission is no longer just to outsmart the troll so the river can be crossed, but perhaps, for the three billy goats to be of help to her. A lovely story, a great addition to the canon of Three Billy Goats Gruff, and a moral and visual journey that could serve as mentor text for young writers and artists, The Three Billy Goats Bueno is a story to be read again and again.

A prolific writer of books for young readers, Susan Middleton Elya is the author of additional bilingual remixed tales such as La Princesa and the Pea (Juana Martinez-Neal, 2017), La Roja Riding Hood (Susan Guevara, 2014), and Rubia and the Three Osos (Melissa Sweet, 2010). She also wrote La Madre Goose: Nursery Rhymes for los Niños (Juana Martinez-Neal, 2016), and Fire! ¡Fuego! Brave Bomberos (Dan Santat, 2016). Originally from Iowa, and a former teacher, she now lives in Northern California. More information about her and her books can be found at her website.

Miguel Ordóñez lives in Madrid, Spain, where he works as an illustrator of both children’s books and other products. His picturebook, Your Baby’s First Word will be Dada (2015) by Jimmy Fallon was honored by the Society of Illustrators. He has two other books with Fallon entitled, This is Baby (2019), and Everything is Mama (2017).

WOW Review, Volume XIII, Issue 2 by World of Words is licensed under a Creative Commons Attribution-NonCommercial-ShareAlike 4.0 International License. Based on work by Holly Johnson at https://wowlit.org/on-line-publications/review/volume-xiii-issue-2/8/.