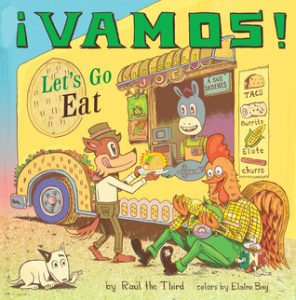 Welcome to a rich world of both food and language! Little Lobo and dog Bernabé deliver food to customers all over the city. His friend Kooky lets him know that he has an important delivery to make. Tonight is a big night for the Lucha Libre at the coliseum, and they have a very special customer. El Toro, the popular luchador, and his friends need some great food before the matches begin, and Little Lobo, Bernabé, and Kooky are the perfect amigos to get the job done! Jumping on Little Lobo’s new bicycle, they visit all the food trucks, pick out the most delicious street foods, and make the delivery just in time for lunch. They do such a good job, they are El Toro’s special guests for the night’s show.

An informative and fun picturebook with cartoon-like illustrations, ¡Vamos! Let’s Go Eat is a celebration of street food, the Spanish language, and Mexican culture. Readers will be immersed into Little Lobo’s world and the fantastic foods sold by street vendors around his city. Tacos, tamales, and elote, along with marranitos and frutas picadas fill the pages. Don’t forget the salsa, queso, and guacamole! And to drink? ¡Aguas frescas! The bilingual narrative positions English and Spanish in harmony so readers can easily understand exactly what is occurring and thus can share in the celebration of food, those who create it, and then those who consume it.

Warning! Don’t read this book if you are hungry. You will rush out to the nearest Mexican restaurant, and that might not be able to completely satisfy you or meet the richness of foods highlighted within this short text. It is apparent this book is not only a narrative, but a love letter to street vendors and Mexican American culture and food. But there is also the inclusion of those vendors creating great street fusions with the mention of Kimchi Kiosko, the blend of Mexican and Korean cuisine. A wonderful book for those who love food or learning Spanish and great fun for all readers.

Books that would complement ¡Vamos! Let’s Go Eat include other books celebrating Mexican American culture and street food. It could be paired with Chef Roy Choi and the Street Food Remix by Jacqueline Briggs Martin, June Jo Lee, and Man One (2017) or The World Atlas of Street Food by Sue Quinn and Carol Wilson (2017), both of which celebrate street food. It would make an excellent addition to a bilingual collection of Spanish/English books for those interested in language attainment. If interested in illustration styles, then Vamos would make a nice addition to a multicultural/global text set of both picturebooks and graphic novels for middle school students. Graphic novels could include When Stars are Scattered by Victoria Jamieson, Omar Mohamed, and Iman Getty (2020), American Born Chinese by Gene Luen Yang (2008), and New Kid by Jerry Craft (2019). Wink by Rob Herrell (2020), The Apartment: A Century of Russian History by Alexandra Litvina, Anna Desnitskaya, and Antonia W. Bouis (translator) (2019), and A Year Without My Mom by Dasha Tolstikova (2015) could also be included in a discussion of illustration styles.

Raúl the Third is a Mexican artist and illustrator. Born in El Paso, Texas, he spent his youth on both sides of the border. He now lives in Boston with his wife and colorist, Elaine Bay, and their son, Raúl the Fourth. He won the Pura Belpré Award for Lowriders to the Center of the Earth (2016), authored and illustrated the popular ¡Vamos! Let’s Go to the Market (2019) as well as the El Toro series for younger readers and the Lowrider series for middle grade students. More information about Raúl can be found at his website.

WOW Review, Volume XIII, Issue 2 by World of Words is licensed under a Creative Commons Attribution-NonCommercial-ShareAlike 4.0 International License. Based on work by Holly Johnson at https://wowlit.org/on-line-publications/review/volume-xiii-issue-2/9/.