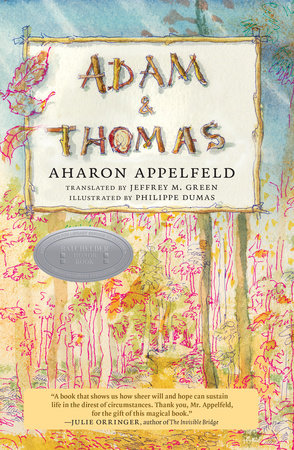 Part autobiography, part fable, Batchelder Award Honor Book Adam & Thomas, by Holocaust survivor Aharon Appelfeld, is a tale of two nine-year-old Jewish boys and their survival in the forests of Ukraine toward the end of the Nazi occupation of Eastern Europe during World War II. Each boy is brought to a large forest separately by their mothers who leave them as Jewish ghettos are emptied and Jews are transported to concentration and death camps as part of Hitler’s Final Solution. Adam, described by Appelfeld as a child of nature, and Thomas, a pensive and serious child of the city, come to rely on each other and survive together. Throughout, Adam teaches Thomas how to survive in the woods, serving as an example of self-sufficiency and strength while Thomas, a sensitive and gifted writer, records their daily activities. Alone in the forests for months, they learn to forage for food, build shelters, and meet up with other Jews who took to the woods to hide, including Mina, a former classmate, who brings them food and other survival essentials. At the end of the war, their mothers return to two very changed boys and the novel concludes with the mothers and Adam and Thomas caring for Mina who is injured and deathly ill.

Throughout the novel, the tale is accompanied by occasional spindly ink and watercolor illustrations by Philipe Dumas that contribute to the ethereal and dream-like mystical aura that Appelfeld creates from the boys’ point-of-view. Dumas, a published author and illustrator of children’s and young adult books, ably captures the essence of the story including fine details that beautifully contrast with and support Appelfeld’s simple but heart-felt prose. While the plot verges on formulaic, including its rather unbelievable ending, there is no mistaking the authenticity of the emotional and physical trauma the boys experience as they will themselves to survive. However, it appears that Appelfeld and Dumas attempted and successfully created a distinct blur of fantasy and reality, textually and illustratively, making this Holocaust novel very readable and less frightening for younger adolescents. Although the novel is usually categorized with more graphically depicted Holocaust atrocity titles for young adults, Appelfeld tells his challenging story of survival in a sensitive, gentle, manner, making this novel a good choice for middle-school grades studying the Holocaust or genocide.

Steeped in Judaic spirituality and wisdom, the story is a very “Jewish” account of the Holocaust experience. It begins and ends with two of the 613 Jewish mitzvot (good deeds) as early on Adam teaches Thomas practical survival skills (honoring learning) and at the end, caring for sick Mina (helping the sick). Additionally, the notion of God is present and referenced over 20 times by the boys as they appeal for help. Also, the use of the color white, a symbol of purity and grace in Judiasm, plays a central role, appearing in the forms of encountered animals in the forest and in dreams the boys relay to each other.

And finally, the book’s original title in Hebrew, Yalda Shelo Minhaolam Hazé (A Girl from Another World), adapted into English as Adam & Thomas by translator Jeffery Green, is curious and sage. Adam in Hebrew means “earth” and Thomas in Hebrew means “twin”. These two names signify the novel’s main messages, including the down-to-earth friendship between the boys indicating that no matter their differences, surviving traumatic and harsh circumstances and standing ground on the earth together, they are like twins as physical and emotional challenges present themselves. One does wonder, however, about the original title as Mina, the filmy, fragile girl from another world, has a modest role in the overall plot which, at best, is fleeting. However, she does keep the boys alive by slipping them food and warm blankets. The original title could well be Appelfeld’s autobiographical way of demonstrating appreciation by paying tribute to these favors which, considering the sizeable risks Mina took to deliver these goods, was huge.

Because the novel is so heavily rich in Jewish folklore and customs, it should be paired with other texts that present Judaic traditions and Holocaust experiences. Zlateh the Goat and Other Stories by Issac Bashevis Singer and illustrated by Maurice Sendak (1966) is a wonderful way to showcase simple but culturally rich Eastern European Jewish traditions. By reading it prior to Adam & Thomas, the collection provides a glimpse into life and wisdom common to Jewish shtetl life and folklore and demonstrates the value of living life gracefully, spiritually, and fully as Adam and Thomas do. A text set of additional Holocaust titles to accompany Adam & Thomas include Mario Escobar’s (2018) Auschwitz Lullaby, Lois Lowry’s (1989) Number the Stars, Uri Orlev’s (1981) The Island on Bird Street, and Eli Wiesel’s (1961) Night.

Aharon Appelfeld was born in a Burkovian village in Eastern Europe in 1932 and died in Petah Tikva, Israel in 2018. The winner of several prestigious literary prizes and awards, he was Professor Emeritus of Hebrew literature at Ben Gurion University in Beer Sheva, Israel. At the age of eight, he escaped from a concentration camp and wandered the forests of Ukraine for three years until picked up by the Red Army in 1944. He made his way to Palestine in 1946 and remained in Israel until his death.

Philipe Dumas, a French author and illustrator of several children’s and young adult books, divides his time between writing and illustrating books and designing and painting theatrical scenery. The grandson of an Hermès CEO, Emile Dumas, Dumas’s characters are always playfully rendered with attention to lots of detail and demonstrated care. He is also a scarf designer for the luxury brand, Hermès.

American born translator, Jeffrey Green, relocated to Israel with his wife in 1973 just two weeks before the Yom Kippur War. He worked with Aharon Appefeld for over 30 years as his official translator. Green also translates works from French to English.

WOW Review, Volume XIII, Issue 3 by World of Words is licensed under a Creative Commons Attribution-NonCommercial-ShareAlike 4.0 International License. Based on work by Shelley Baumgarten at https://wowlit.org/on-line-publications/review/volume-xiii-issue-3/4/