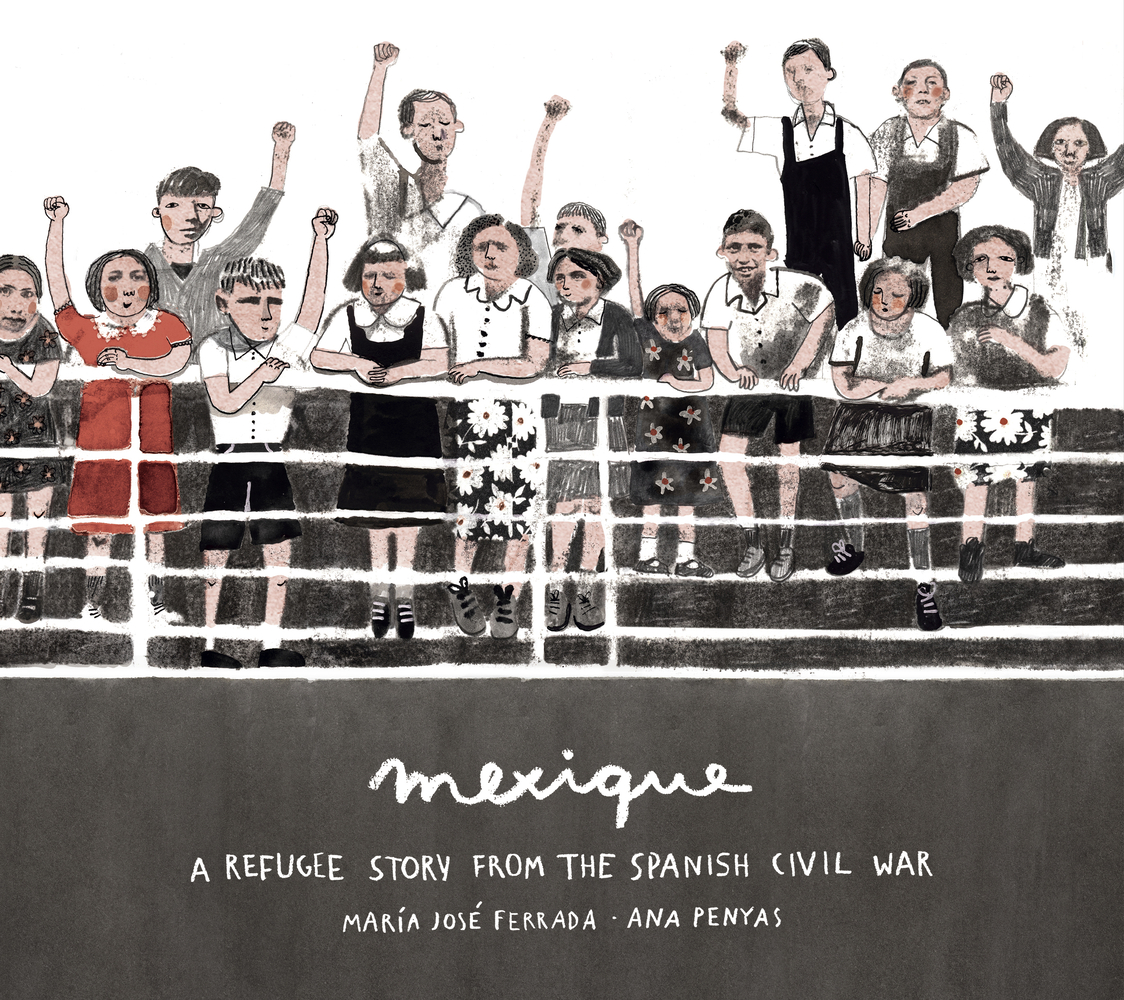 Amidst the narratives of refugee children that reflect both history and contemporary times, Mexique uniquely and sensitively presents a historical story little known to many cultures. Yet, it reflects a familiar contemporary theme of separation as the result of loving parents who seek the best for their children. With sparse poetic verse, the child narrator shares his story of boarding the large ship, the Mexique, with over 400 other children on a journey that takes them far from home, supposedly for three or four months until “everything calms down.” They are fleeing the Spanish Civil War in 1937 as they travel from Spain to Mexico where they will be cared for and protected until the war subsides. The naïve understandings of the young child represent the innocence, loneliness, and fears of children affected by war, trusting others to care for them. This story takes place over the course of the trip across the ocean as the children play games, shed tears, and turn to other older children for comfort. Eventually they are welcomed in Mexico, and the story ends as they board the train for Morelia, their home for much longer than a few months. Historically, they became known as “The Children of Morelia.”

An afterward is provided at the book’s end explaining the historical context of the Spanish Civil War, a conflict between the Monarchy led by General Franco and the Republicans fighting for democracy, the side from which these children came. Once the longer-than-anticipated conflict ended with General Franco’s victory, the aftermath created danger in Spain for the Republicans due to Franco’s punishment as well as lack of resources for daily life. And, months later the beginning of World War II made Europe unsafe. Morelia was deemed a safer place, and the children remained there until 1948 and beyond. For many it became a permanent home.

With the narrative focused on the child narrator and the historical information shared at the end of the book in an Afterword, author Ferrada maintains the focus of the story on child refugees and the trauma of war. The book’s dedication creates an initial thought that brings together refugees of the past and present:

“To the Children of Morelia,
And to all those who are moving in search of a life without fear.”

While a closing comment in the Afterword similarly sustains this thought:

“We tell the story of one ship, knowing that there is no registry of all those who cross the sea, every day, seeking that basic human right: a life without fear.”

The illustrations within Mexique are somewhat haunting with the use of a black and white color palette, occasionally blurred and with accents of a dull red. The child-like style of the drawings is based on actual photographs and appears at times to be drawn over the actual images in the photographs. The illustrations elaborate the metaphoric verse with expressive figures and faces that share the sorrow of families watching their children depart, the seriousness of war as well as the innocence of playing war, the many perceptions of the ocean over time, and the welcoming crowds as the ship approaches Mexico.

A statement at the narrative’s end addresses the extensive research and interviews upon which the story is based as well as the use of photographs of the “Children of Morelia” and the Mexique. Additionally, the publisher acknowledges Fulbright-National Geographic Digital Storyteller, Destry Maria Sibley, for her assistance. She is also a descendant of a Mexique passenger.

Mexique was selected to be on USBBY’s Outstanding International Book List for 2021 and the NCTE Notable Poetry List for 2021.

Refugee stories have been told in many ways during the past few years and Mexique adds a unique perspective to these books as well as addressing a common theme. Books that align well with this refugee theme might include: The Journey (Francesca Sanna, 2016), Marwan’s Journey (Patricia De Arias, 2018), The Day the War Came (Nicola Davies, 2016), Azzi in Between (Sara Garland, 2013), My Beautiful Birds (Suzanne Del Rizzo, 2017), Lubna and Pebble (Wendy Meddour, 2019).

Author María José Ferrada is a journalist and award-winning writer. Among these awards are the Academia Award for the best book published in Chile, her home country, the Santiago Municipal Literature Award, and the Chilean Ministry of Culture Award. In 2018 she received the Hispanic-American prize for poetry. Currently, living in Santiago, Chile, she works for the National Library of Chile as a children’s editor of a digital resource center. More information about her numerous titles can be found at https://tinhouse.com/author/maria-jose-ferrada/.

Illustrator Ana Penyas resides in Madrid, Spain and has received awards for her work in comic art. More information can be found at her website.

WOW Review, Volume XIII, Issue 3 by Worlds of Words is licensed under a Creative Commons Attribution-NonCommercial-ShareAlike 4.0 International License. Based on work by Janelle Mathis at https://wowlit.org/on-line-publications/review/volume-xiii-issue-3/7/