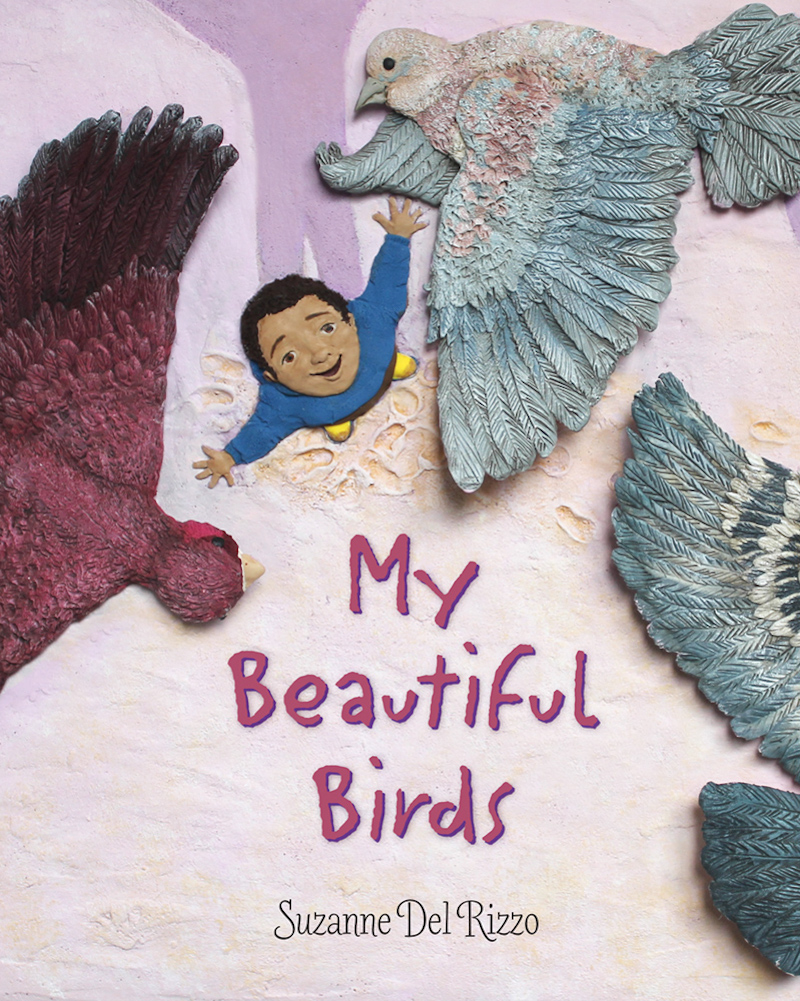 Among the many refugee stories in public media and later captured in books that provide points of discussion for young readers is My Beautiful Birds. Focused on Syrian refugees who are forced to leave their homeland and seek shelter in a variety of other countries, this story reflects a first person narrated fictionalized story of one young child, discovered in a newspaper article by this author. This book addresses the effects of displacement from the home a child has always known and, in this case, grieving for the pet pigeons he left behind and whose soaring images as they fled are imprinted in his mind. Life in the refugee camp is not pictured as grim but as a community of people who are trying to continue their lives as best they know how in this temporary and uncertain arrangement by planting a garden, opening small shops, cooking traditional foods, and organizing a school.

A mother herself, the author says she sought ways to explain this situation to her children with the result being this engaging picturebook. While there is a contrast in the book’s beauty and the grim situation of these families, the story realistically portrays the boy’s struggle with his loss and offers many points of connection and discussion for young readers. Eventually, the child finds solace and hope in the appearance of birds who cluster to him daily in the camp. Realizing these are probably birds belonging to someone who also is far away from home, the boy reveals his own inner strength in dealing with the situation, a sense of agency as he consoles a newcomer to the camp, and a sense of hope for the reader as the story ends. Realizing this isn’t the end of the Syrian story, the author includes a note that clearly states facts about displaced families in our global community with a focus on Syria. Factual information is provided as coming from The United Nations Refugee Agency that states around 65.3 million people are displaced around the world as of July 2016. Readers are invited to examine resources about the Syrian conflict by going to pajamapress.ca/illustrator/del_rizzo_suzanne.

Art is a key element in the telling of this story, both in the beautiful images created from plasticine, polymer clay, and paint as well as the use of art within the story. Suzanne Del Rizzo tells this refugee story with scenes that have texture, are vibrant though realistic shades of color, and occupy varying placement and perspectives on the pages. This rich illustrative setting contextualizes the role of art in the story as a means of disclosing the inward struggles of the child as he draws images of his birds only to cover them with black paint. He imagines his birds with somewhat of an artist’s eye in the clouds of the brilliant sky above him, soaring and swirling. Eventually, as he begins to find peace within his heart and bravely faces the challenges before him, readers see a brilliant artistic display of kites made by school children from scraps and bright paints.

Suzanne Del Rizzo lives in Ontario, Canada and, interestingly enough, gave up a career in scientific research to work in illustration for children. She won the SCBWI Crystal Kite Award as illustrator of her first picture book, Skink on the Brink (2013) and is both author and illustrator of My Beautiful Birds. More information on Del Rizzo can be found at suzannedelrizzo.com.

Other books pair well with My Beautiful Birds as they relate the stories of refugees fleeing from different countries: The Journey (Francesca Sanna, 2016); Stepping Stones (Margriet Ruurs, 2016); Lost and Found Cat: The True Story of Kunkush’s Incredible Journey (Doug Kuntz and Amy Schrodes, 2017). Additionally, WOW has numerous previous reviews and responses to books in its various forums that encompass a number of immigrant stories, speaking to the effects of displacement on families, especially children, and inclusive of animals, art, and connections to others.

WOW Review, Volume IX, Issue 4 by Worlds of Words is licensed under a Creative Commons Attribution-NonCommercial-ShareAlike 4.0 International License. Based on work at https://wowlit.org/on-line-publications/review/ix-4/