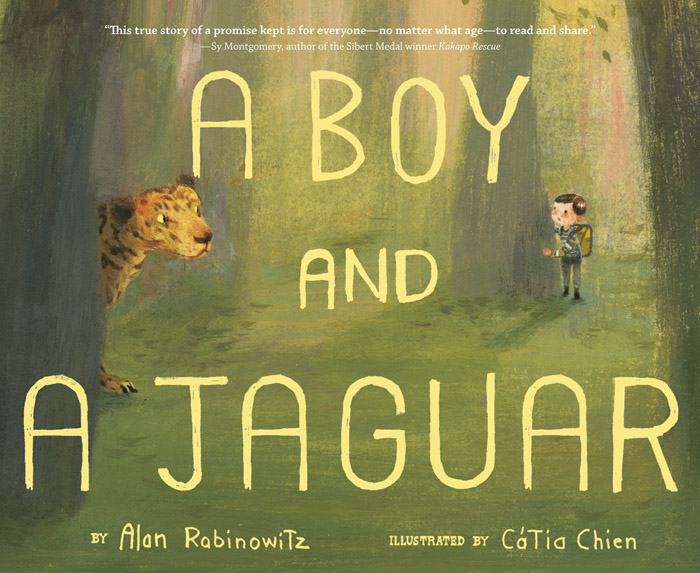 This autobiographical account of Alan Rabinowitz’s childhood experiences recollects two intersecting memories that profoundly influenced the course of his life–how stuttering made him feel “broken” and how animals made him feel accepted and whole. Rabinowitz self identifies as a stutterer though he discovers he can speak easily and fluently with animals, especially the big tigers at the zoo. In fact, Rabinowitz feels more comfortable talking with the animals than he does with humans and learns to accept that he will always be a stutterer. In college, Rabinowitz learns to be a fluent stutterer, meaning his speech is not impeded by stuttering, though he still feels broken inside. After college, Rabinowitz studies animals in the Smokey Mountains and then Belize. In Belize, jaguars are being shot at an increasing rate. Rabinowitz must make a convincing argument in the office of the Prime Minister of Belize to protect the jaguar. He only has 15 minutes to make his case and has no time for stuttering. Back in the jungles of Belize, Rabinowitz comes across the biggest male jaguar track he has ever seen. Rabinowitz is face to face with the jaguar he has been tracking, but rather than feeling fear, he feels whole. Similar to the jaguar, Rabinowitz understands that he has found his purpose.

A Boy and a Jaguar is an excellent book for a number of reasons. The book offers a compelling story to which many children can relate. Because of the boy’s difference, he grapples with feelings of isolation and loneliness. There are also big, dangerous animals that many children love to read about along with engaging pictures. The story provides a hopeful tale of an individual overcoming a challenge and becoming an advocate for others. In this case, the boy grows up to advocate for big cats and stutterers.

A Boy and a Jaguar pairs with Back to Front and Upside Down by Claire Alexander (2012). Both books deal with children with disability experiences and occur at least partially in a school setting. The books are ideal for pairing to contrast the way individuals with special needs are treated in each circumstance. Another book that makes for a good pairing is Six Dots: A Story of Young Louis Braille (Jen Bryant, 2016). This book tells the story of another extraordinary boy, Louis Braille, who grew up to contribute significantly to society by simplifying a complex military coding system to create the braille reading system for the blind.

Alan’s love and comfort with animals lead him to work with them all over the world, studying their habits. Dr. Alan Rabinowitz is one of the world’s leading big cat experts. He attended the University of Tennessee and graduated with advanced degrees in Zoology and Wildlife Ecology and has dedicated his life to surveying the world’s remaining wild habitats with the intention of securing homes for some of the most endangered animals. Part of his focus on cats stems from a desire to conserve top ecosystem predators. Saving top predators in the food chain and conserving landscapes for those animals have far reaching implications. Rabinowitz is also one of the co-founders of Panthera, the only organization devoted exclusively to the conservation of the world’s 38 wild cat species and their landscapes.

Illustrator Catia Chien was raised in Sao Paulo, Brazil, graduated from Art school in Pasadena, CA, and currently lives in New York City. The book is the winner of the 2015 Schneider Family Book Award for artistic expression of the disability experience. Chien creates illustrations that make good use and range of the color palette. The maroon tones on the pages at the beginning of the story when Rabinowitz is placed in a disturbed class and labeled as broken are dark without being scary. Those dark hues alert the reader that something is wrong, then immediately lighten with bright yellow and greens on the next page when Alan spends time with his pets. The Smokey Mountains are frightfully dark with a rose hue about the sky and the forests of Belize are similarly intimidating and a dark deep gray-green. Most of the colors throughout the story are muted though the final drawing is a bright, drawing of Rabinowitz and the jaguar. The brightness of the picture matches the brightness of Alan and the jaguar’s future.

Chien uses the entirety of the page in each drawing. She draws engaging edge-to-edge illustrations, making use of size and scale at times to demonstrate emotional distance or closeness, importance, and scope. Chein also makes use of impressionistic techniques when drawing the landscape. The faces of the animals and humans, for the most part, are more explicit, though the background of many of the pictures is drawn with incomplete, brisk brushstrokes giving an impressionistic feel.

Rabinowitz is the author of eight books, including Jaguar: One Man’s Struggle to Establish the First Jaguar Preserve (1986/2000), Chasing the Dragon’s Tail: The Struggle to Save Thailand’s Wild Cats (1991/2002), Beyond the Last Village: A Journey of Discovery in Asia’s Forbidden Wilderness (2001), Life in the Valley of Death: The Fight to Save Tigers in a Land of Guns, Gold, and Greed (2008), and most recently An Indomitable Beast: The Remarkable Journey of the Jaguar (2014).