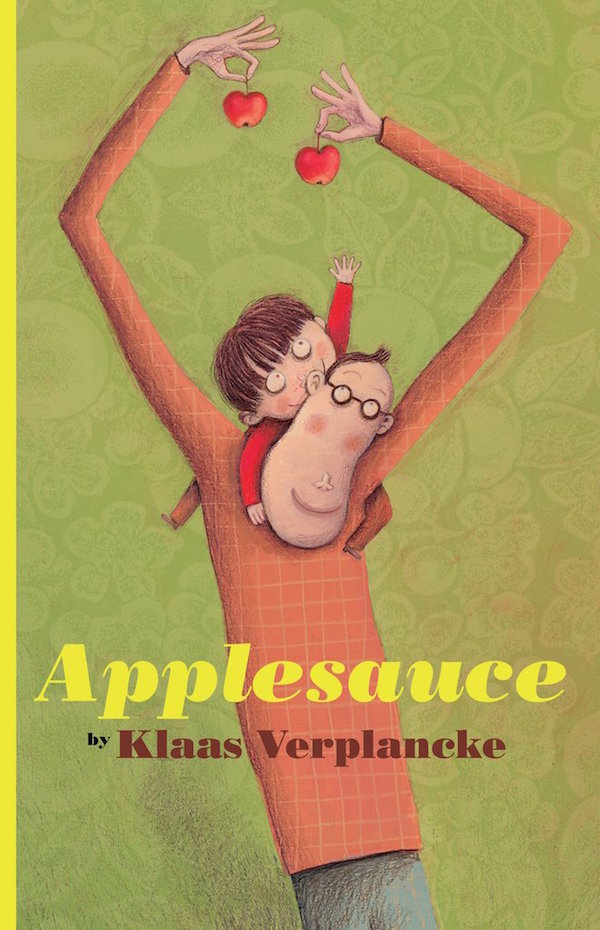 Applesauce is a universal story for children from any culture who deal with daily situations where they come to realize that their parents are people and some of their days are better than others. The book comes from Belguim and has been translated into 11 languages. It was nominated for many awards in the U.S. and abroad and won the best picturebook 2012 award in Spain. The story is told from the point of view of a young boy, Johnny, who describes his father from a child’s perspective. According to Johnny, his father has smooth cheeks, an apple in his throat, and sounds like mommy when he sings in the bath. The illustration shows how Johnny watches his father with smiles and looks at him with wide eyes and interest as his father dances around the room with him while they are getting ready for the day. However, these happy moments do not last because the observant child describes how his father’s mood can change on a dime. Johnny sees his father with a cactus growing out of his chin and his breath smells like cauliflower. At times, he has warm hands and his fingers taste like applesauce, but other times his hands are cold and flash like lightning, and he becomes a thunder of anger. Johnny continues to alternate between showing readers the happy Daddy he loves and the other version of his father. In the end, the child decides to find a new father, but he changes his mind when he realizes that people get angry, even those whom we love but that negative feelings do not last where there is love and understanding.

This book’s strength lies in the way it captures the reality and complexity of a parent-child relationship and in its illustrations. Most books portray parents as loving and completely understanding. This might be attributed to the fact that authors do not want to be accused of encouraging abuse or poor parenting. But Applesauce is a unique and realistic book because it shows that there are good and bad days of parenting. Also, aside from an early remark that Johnny’s father “sounds like a mom when he sings in the bath,” neither the text nor the illustrations shows a sign of the mother or second adult. However, the story shows readers that a child can be happy with one parent, which helps children to adapt to the idea of single parenting. Since it is not wise for children to only read books about how perfect parents are all the time or imply that children can only have good times if they have two parents, books like Applesauce need to be written.

Moreover, the humorous and imaginative illustrations combined with the juxtaposition of the different sides of the father’s personality contribute to the uniqueness of this book. The illustrator uses perspective and color to successfully demonstrate the mood of every page. When Johnny’s father is “Applesauce Daddy” he looks healthy, smiley, and clean cut. The perspective used is eye level and the colors reflect happiness and warmth. But when Johnny’s father becomes “Thunder Daddy,” the illustrations darken and the perspective becomes looming. The illustrations show Johnny’s vulnerability and fear from a child perspective since he becomes small and diminished in the setting and the father becomes large. In addition, Verplancke uses his imaginative illustrations to show how the scary experience drives Johnny back into the kitchen where his father is. Although Johnny sees his father’s transformation into a hairy, scowling gorilla, he offers a bowl of applesauce to his son and his image reverts gradually to the “Applesauce Daddy” as peace and love is restored between the two.

This picturebook is written and illustrated by world-renowned illustrator, author, and graphic designer, Klaas Verplancke. He lives in Bruges, Belgium, and has exhibited his work in Belgium and abroad. Because his illustrations reveal a sense of humor, poetic imagination, and reality, he has won the Bologna Ragazzi Award and was a finalist for the Hans Christian Andersen Award. This book is his first translated picturebook in the English-speaking book market. The inspiration for this book came from a real experience of Klaas Verplancke and the close relationship with his young son.

This book can be paired with books to show that children who only have one parent can live happily. A Day with Dad, which is written by Bo Holmberg and illustrated by Eva Eriksson (2008), is a good picturebook to pair with Applesauce. This book celebrates a loving father-son bond and at the same time acknowledges the difficulty of divorce. After the separation, Tim lives with his father and they spend the whole day together. The story shows how Tim has a good time with father and proudly introduces him to others. The text and colored-pencil illustrations reinforce the importance of the loving father/son relationship and the fact that even if parents do not get along together, the love for their children is not affected. Applesauce and A Day with Dad both offer comfort to children and their parents in similar circumstances. It’s good to encounter realistic picturebooks that remind children of this in compelling ways.