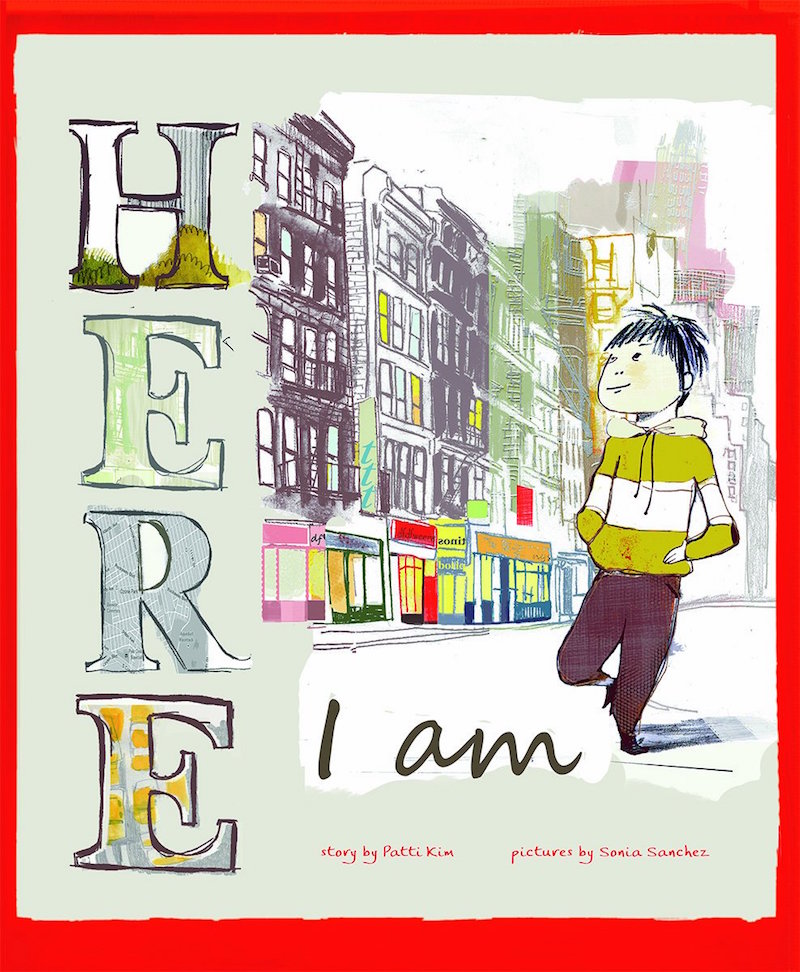 “I hope it encourages you to live out your own story of arriving to that place where you can say, ‘Here I am.'” – Patti Kim (2014)

This wordless picturebook tells an immigration story of a young boy and his family as they travel from their homeland to a large American city. The move is difficult for the young boy as he misses the comforts and familiarity of home. He finds a seed in his coat pocket that provides him comfort during the transition and as his new situation becomes overwhelming, he holds the keepsake close. One day, while playing with the seed, he drops it from his apartment window and it is picked up by a young girl who is skipping outside the building. In his efforts to recover his treasure, he is exposed to many positive people and experiences in his new neighborhood. He catches up to the girl and a friendship grows. The two plant the seed in a local park and the story ends with the hope of what will grow.

There is much to love and enjoy in this book beyond the story itself. The story is distinctly the boy’s as readers follow him and see his movement through the various feelings and emotions of leaving his home as well as finding his place in a new community. Readers see the boy discovering new experiences and friends in a new country and city. Color is used powerfully throughout that progression, beginning with a dark and gray scale at the beginning and transitioning to darker, subdued coloring of people and surroundings. As the main character discovers the positives and opportunities of this new place, the colors become more bold and vibrant. The seed, outside of the clear symbolism of new life and opportunity, has intriguing visual elements. Throughout the book, contrasting brilliant red violet colors as well as a roundness and glow of the seed emphasize safety and security. In addition, there is often an imagined growth emanating from the seed. These elements make the seed stand out as the boy clings to it initially as a remembrance of his homeland and later as the catalyst for new opportunities, experiences, and friendship.

Possibly the most fascinating visual element present is the use of text as part of the illustrations in this wordless picturebook. As the young boy makes his way through the various surroundings, environmental print uses familiar symbols that are jumbled, making them unreadable. This print is both an alienating and engaging element all at once. It is alienating as the reader can feel the confusion that comes along with not knowing a written language, and engaging as the reader seeks context and the familiar to interpret the meaning of letters and symbols.

Being a wordless picturebook, the instructional opportunities in writing and reading abound. This book allows students to write creatively and demonstrate use of plot elements in their writing as they write the story of the journey. Here I Am would make a great addition to an immigration story text set highlighting the varied stories and experiences of those who undertake the journey. Others to include are Grandfather’s Journey (2008) by Allan Say, From Here to There (2014) by Laurel Croza, All the Way to America: the Story of a Big Italian Family and a Small Shovel (2011) by Dan Yaccarino, My Name is Jorge On Both Sides of the River: Poems in English and in Spanish (1999) by Jane Medina, and My Name is Sangoel (2009) by Karen Lynn Williams and Khadra Mohammed.

The author’s note indicates that this book is based upon on Patti Kim’s own immigration story from Korea to America. Her immigration story began on Christmas Day 1974 when her family traveled from Pusan, Korea to the United States, which inspired her work as an author. Here I Am is her first children’s picturebook and was on Kirkus Review’s list of best children’s books of 2013.  She is most noted for her young adult novel, A Cab Called Reliable (1997) on immigration. Here I Am is illustrated by Sonia Sanchez and is her first picture book, earning her an Eisner Award nomination for best painter.