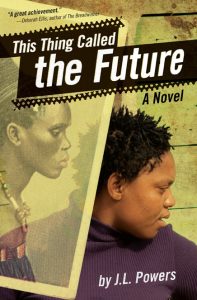 As for me, I feel a sense of power and energy, like we’re going to beat this thing, this curse, even that we might find some luck to carry us thought these sad days (p. 157).

In her neighborhood and across much of her region around Pietermaritzberg, South Africa, the curse of HIV and AIDS is destroying families and communities, including Khosi’s. Teen-ager Khosi is smart and loves science, hoping to use her knowledge to make needed changes to ensure healthier conditions for her community. But Khosi is also a girl from a family split between traditional medicines and contemporary thinking that shirks traditional ways of being. Wishing to remain true to her own ideas while honoring tradition, Khosi thinks it may eventually take both ways of thinking to find a way through the AIDS epidemic sweeping South Africa.

More than health issues plague Khosi; she is also interested in a boy and having fun, but it is dangerous for a young girl to walk alone in a place where men do not honor young women’s rights to themselves. Khosi must also evade several other dangers—the woman next door who is intent upon disrupting Khosi’s family, and the witch woman down the street who targets Khosi for her intelligence and perhaps eventual ability to heal through contemporary medicine. In many ways, Khosi is at the intersection of the dilemmas and decisions any young person would need to make during adolescence, but the context under which she comes-of-age is culturally unique and intriguing for readers, especially those who are unfamiliar with South Africa and life within many Black neighborhoods within it. The traumas that weave through Khosi’s life and by extension many areas of South Africa are both harrowing and insightful.

This Thing Called the Future is well written and researched. The dialogue and events are authentic and create a real sense of Khosi’s dilemmas and life circumstances. In many ways, the narrative is a visit to the community, and readers will feel as though they are right there with Khosi as she attempts to negotiate the personal strain she experiences as a result of her mother’s resistance to tradition, her grandmother’s (Gogo) balance of tradition and religion, and her own changing feelings about life and love.

Books that would complement this text include the sequel to this book by Powers, Under Water (2019). Books set within the continent of Africa that incorporate traumatic circumstances include Walking Home by Eric Walters (2014) and Golden Boy by Tara Sullivan (2014), as well as The Red Pencil by Andrea Davis Pinkney (2015) and A Long Walk to Water by Linda Sue Park (2011).

Author J.L. Powers is a writer and editor who lives in Northern California. She has written several books including Amina (2015), which was included in the USBBY’s Outstanding International Books List for 2016. Her stories focus on social issues. When writing this book, she worked with several community members in South Africa to gain a better understanding of the issues around HIV and AIDS, and the community’s response in respect to traditional and contemporary medicines. She is the founder and regular contributor to the blog, The Pirate Tree: Social Justice and Children’s Literature, which is found at the following website: https://www.thepiratetree.com/