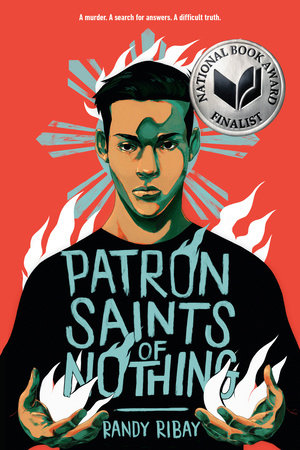 Jay Reguero at first seems to be a typical American high school senior, relieved that he is accepted into the University of Michigan. The reader quickly learns that Jay is a half Filipino, half Caucasian American, born in the Philippines, but living in the United States since he was one-year-old. Though he has visited the Philippines, he does not see himself as anything other than American, as his upbringing taught him very little about his Filipino heritage. One strong tie to the Philippines is his cousin, Jun, the same age as Jay. For years Jay and Jun wrote letters back and forth, but for reasons that Jay seems unable to articulate, he stopped writing to Jun about four years prior to the beginning of the story.

The plot really gets going when Jay comes home from school and is told that Jun was shot dead by police in the Philippines for being a drug dealer. Jay had known that Jun had been thrown out of the house by his uncle at age 14, but the news that Jun had become a drug dealer? Inconceivable. To make matters worse, no one in Jun’s family will talk about it. After receiving a mysterious picture of Jun on Instagram, along with a message asking if he was Jun’s cousin, Jay decides that he must go to the Philippines to find out the truth. The story that follows is one in which Jay discovers what is currently happening in the war on drugs in the Philippines. Coinciding with this is his realization of how little he knows about his Filipino heritage and the richness that it could add to his life.

Author Randy Ribay shares the same heritage as his protagonist, having also been born in Manila, the child of a Caucasian American mother and a Filipino father, giving this story high cultural authenticity. The book is dedicated to “the hyphenated,” which is a term that Ribay uses to describe people whose heritage is of two cultures. The story is told through Jay’s lens, which, as a typical American teenager, has a limited Filipino perspective. He is shocked at how most Filipinos support the way in which President Duterte of the Philippines has dealt and continues to deal with the country’s drug problem. Jay is horrified that his family supports Duterte, even though one of their own was killed (murdered, in his eyes) in the Filipino war on drugs.

Another topic genuinely depicted is the description of the poverty that Jay sees in Manila, but this is balanced by a representation of people who are middle and upper middle class. Given that a large portion of the Philippine population is Catholic, the story shows a realistic portrayal of that aspect of Filipino culture, as Jay’s family are loyal Catholics. The title of the book also reflects this cultural connection.

The cover art of The Patron Saints of Nothing, by Jor-Ros, prominently displays a teenage Filipino male with white flames coming from his hands, shoulders, and head. In an interview, Randy Ribay states that while he was growing up, he never saw artwork in or on the cover of a book that showed a Filipino and he was clearly pleased with the cover for this book.

The Patron Saints of Nothing could easily be paired with books that address drug use. DUTERTE VS SHABU 2017: The Philippine War on Drugs, by James Bergson (2017), is a non-fiction report that analyzes what has happened in the Philippines in regard to President Duterte’s aggressive response to drug problems. This report would give readers solid factual background information that Jay in The Patron Saints of Nothing is not privy to. The young adult novel My Fate According to the Butterfly by Gail Villanueva (2019) would also pair well with The Patron Saints of Nothing. The story is set in present-day Manila with a young main character whose life is impacted by drug use, in this case that of a parent. Another book pairing is Bone Talk by Candy Gourlay (2018), a coming-of-age story set in the Philippine province of Bontoc in 1899. It contains valuable historical information that brings to light how the present-day culture of the Philippines has been shaped by the events of the past, in particular the invasion by the U.S.

The Patron Saints of Nothing is an outstanding young adult book nominated for many awards, ultimately winning the 2019 Freeman book award (High School), and the 2019 Young Adult Golden Poppy award. In addition, it is listed on nine “Best Books” lists, and nine State and Provincial Reading lists. Randy Ribay is also the author of After the Shot Drops (2018), and An Infinite Number of Parallel Universes (2015). He currently teaches English, and lives in the San Francisco Bay area.

WOW Review, Volume XIII, Issue 4 by Worlds of Words is licensed under a Creative Commons Attribution-NonCommercial-ShareAlike 4.0 International License. Based on work by Sherri Carmichael at https://wowlit.org/on-line-publications/review/xiii-4/9/