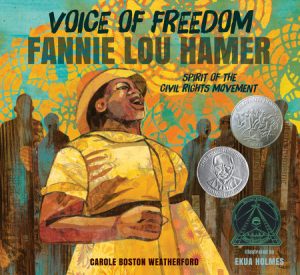 “The truest thing that we have in this country at this time is little children…if they think you’ve made a mistake, kids speak out.” Fannie Lou Hamer (introduction page)

Author Carole Boston Weatherford and illustrator Ekua Holmes bring to life the struggle experienced by Blacks at the hands of White civilians and government officials through the story of Fannie Lou Hamer, the woman Malcolm X called “the country’s number one freedom-fighting woman” (p. 1). A daughter of sharecroppers, Hamer was born in 1917 as the last of 20 children. Her parents received the sum of $50 by the plantation owner for “producing a future field hand” (Weatherford, p. 1). By age 6, Hamer picked cotton in the fields alongside her family, leaving school in 6th grade to work full-time. One of the most egregious acts suffered by the women of Mississippi, including Hamer, was forced sterilization. This book handles this distressing act matter-of-factly, using words that are neither graphic nor triggering. This surgery in 1961 proved pivotal in awakening Hamer’s voice, in song and spoken word, for freedom and civil rights not previously awarded to the Black community across the south, but in Mississippi in particular. She went on to be an integral part of the civil rights movement and even ran for public office several times. Her music is available on YouTube, as are several audio interviews from the late 1960s and early 1970s. She passed away in 1977.

The power of the text lies not only in the generous use of Hamer’s own words in her own vernacular, but also in the illustrations by Holmes, some of which render historical photographs into artwork. The illustrations resemble paintings and collages, evoking the bright hues of African Kente cloth, replete with the symbolism of those colors within African culture. The resulting mood is hope: hope for a future when the community will not need to fight for basic human rights and equal treatment under the laws of U.S. The Author’s Note at the end elaborates on the text. A timeline of Hamer’s life is included, along with a selected bibliography, source notes, and copyright acknowledgements for the images Holmes artistically recreated.

Possible companion books can be found in both fiction and informational texts, like fictional The Watson’s Go to Birmingham – 1963 by Christopher Paul Curtis (1997), the informational Freedom in Congo Square by Carole Boston Weatherford and R. Gregory Christie (2016), Hidden Figures Young Reader’s Edition by Margot Lee Shetterly (2016), and Harvesting Hope: The Cesar Chavez Story by Kathleen Krull and Yuyi Morales (2003). These books are stories of resilience by people of color during times of slavery, discrimination and injustice.

According to her website, Weatherford, author of over 50 books since 1995, teaches at Fayetteville State University in North Carolina. This text won not only a Caldecott Honor, but also a Robert F. Sibert Honor, and a Coretta Scott King John Steptoe Honor for New Talent for illustrator Holmes. It is the author’s desire to tell a new generation the important known and lesser-known stories of the past. Ekua Holmes, a Boston-based artist, desires to bring positive Black images to light through the use of elements like vintage wallpaper, news snippets, found costume jewelry, and texture to tell the stories of family, relationships, hope, and faith. Her website is filled with images of other pieces of her work.

WOW Review, Volume XIV, Issue 1 by Worlds of Words is licensed under a Creative Commons Attribution-NonCommercial-ShareAlike 4.0 International License. Based on work by Sandy Emerson at https://wowlit.org/on-line-publications/review/xiv-1/14/