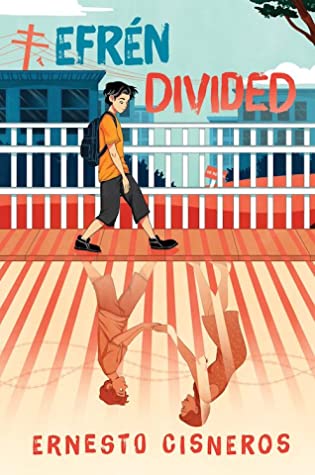 This middle-grade novel tells the story of Efrén Nava, a seventh-grader struggling to keep his family together after his mother, Amá, is deported from the U.S. to Mexico while looking for work at a local factory. At Efrén’s home there is rarely an abundance of food. Amá is “soperwoman” because she is able to whip up his favorite food, sopes, out of thin air. While his father, also undocumented, works two jobs to support the family and earn enough money to help Amá return to the U.S., Efrén is left running the household. His seventh-grade life now includes keeping up his grades, along with taking care of his five-year-old twin siblings who need to be fed, bathed, dressed, readied for school, and then read to and consoled on their return home. Trying to make the little money he has for food last, Efrén saves some of his school breakfast and lunch items and learns to scavenge unopened food packets from the cafeteria trash to feed the twins. Uncertain how his close friend David will react, Efrén keeps his ordeal a secret.

While Efrén struggles, David seems to travel through life without a care. David decides to run for student body president of their middle school to get rid of homework and have the cafeteria serve Takis for breakfast. Running against David is Jennifer, also Efrén’s friend and a serious student who confides to Efrén that her parents are undocumented. Before the election, Jennifer’s mother is deported. Jen, an American citizen, decides not to be separated from her mother, and both are sent to Mexico. Jen leaves a message for Efrén to remember “Somos semillitas” (p. 142).

Once Efrén’s father has enough money to bring Amá back, Efrén volunteers to cross the border into Tijuana to see her and give her the money she needs to return home. While in Tijuana, he is befriended by a young man, Lalo, a taxi driver who saves him from attack by a group of men following him as he makes his way alone through the streets. Lalo takes Efrén to visit The Muro, an iron wall that extends into the Pacific Ocean and separates Mexico from the United States. Here they watch families line up on both sides of the iron gate to visit each other, often the only way Mexican families can see their American-born children. Lalo tells him, “See, people from the U.S. line up, and when their turn comes up, they get to hold hands with the family they’re separated from. It’s how I got to watch my daughter grow up” (p. 191). As promised, Lalo takes Efrén to the designated meeting place to reunite with his Amá, to give her money and to tell her about Lalo’s plans to help her return to the U.S.

This text deals with issues of immigration status and the fear and anxiety many children with undocumented family members live daily in the United States. This book provides a lens for readers to view the complex world of immigration through a twelve-year-old’s perspective as he and his young siblings experience the devastation of family separation. Efrén Divided is an honest look at the current reality of thousands of children who live with undocumented parents and the constant fear they experience wondering if they will return home from school to find one or both of their parents have been deported.

One book pair with Efrén Divided is Three Keys by Kelly Yang (2020). While the main character of Three Keys, Mia, and her parents immigrated from China to the United States and received green cards, Mia’s best friend in her new country is Lupe, who, along with her family, is undocumented. Lupe’s father is picked up by immigration. Both books provide a realistic glimpse into the many societal contributions of undocumented immigrants and the uncertain, unjust, and stressful lives they experience in order to remain in the United States. Both of these books provide a view of turbulent and dangerous political times for immigrants. Efrén Divided focuses on the recent (2017-2020) escalation of Immigration and Customs Enforcement (ICE) raids, and Three Keys occurs during California’s “Save Our State” (SOS) Initiative and the anti-immigrant Proposition 187 (1994).

Another book offering an autobiographic lens on immigration and the loss of parents due to deportation is Diane Guerrero’s (2018) young adult book, My Family Divided. Guerrero provides an eye-opening first-hand account of the hardships, loneliness, and the cruel reality of having both parents deported and taken from her at the age of fourteen. Efrén Divided, Three Keys, and My Family Divided show the courage and strength of both U.S.-born children of immigrants and immigrant children who take a stance and use the power of their voices to fight against a flawed and broken immigration system that tears families apart.

Cisneros, a Latinx 20-year veteran teacher in Southern California, writes that “Efrén’s story is a reoccurring theme I see too often in the lives of the students I teach.” Furthermore, he states: “I hope Efrén Divided strikes a chord with any Latinx child who yearns to see themselves represented in books. In addition, I hope it helps break down the walls currently being built by hatred and intolerance, and that it provides support and an understanding of the realities immigrating families experience” (Schu, 2019). Efrén Divided indeed accomplishes what the author set out to do. Ernesto Cisneros won the 2021 Pura Belpré award for his debut novel, Efrén Divided. More information can be found at his website.

WOW Review, Volume XIV, Issue 1 by Worlds of Words is licensed under a Creative Commons Attribution-NonCommercial-ShareAlike 4.0 International License. Based on work by Rachel Salas at https://wowlit.org/on-line-publications/review/xiv-1/4/