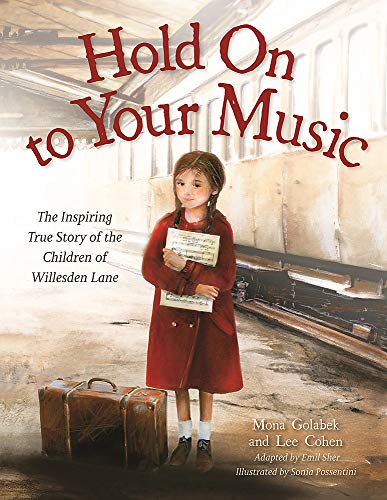 Hold On to Your Music: The Inspiring Story of the Children of Willesden Lane
Written by Mona Golabek and Lee Cohen
Adapted by Emil Sher
Illustrated by Sonia Possentini
Little, Brown and Company, 2021, 40 pp
ISBN: 978-0-316-46313-3

Emil Sher who adapted the novel, Hold on to Your Music by Mona Golabek and Lee Cohen into a picturebook, captures the essence of bravery through the life of a young Jewish refugee in London. The story is based on the life of Lisa Jura, a concert pianist. Mona Golabek, herself a Grammy nominated pianist, tells her mother’s story in hopes others can find the strength to stand against hatred and discrimination and be encouraged to follow their dreams, inspiring fortitude in one’s self. This book sheds light on the Holocaust and religious persecution, giving a first glimpse of this time period to young readers.

Lisa, who lived with her parents and siblings in Vienna before World War II, grew up playing piano. She had to put her dreams and hopes on pause because of new laws that said Jewish people could not be taught piano lessons by non-Jews. Many aspects of her life were changing and she did not understand how being Jewish was a crime. She continued to play piano with her mother and it was her dream to perform where the great musical masters of music had performed. Right before the war broke out. her parents made the difficult decision to put her on a train to go off to the safety of Great Britain. Her mother told her to “hold on to your music,” saying music would be her best friend. She was on a train known as the Kindertransport with other Jewish children and would come to call Willesden Lane home. Her new home luckily had a piano and Mrs. Cohen, the head of the home, was more than happy for her to play. She was able to continue playing nightly after she was done working in the factory. The piano was her refuge and her strength; it was her memory of her home and family. She played during the bombing raids and her playing gave hope to the other children in the home that someday they would find their new normal. Mrs. Cohen suggested that Lisa study at the Royal Academy of Music but Lisa was concerned that they would not want a Jewish refugee. She auditioned for the academy and was accepted. This was another step closer to performing on the stage she remembered as a young girl in Vienna. After the war ended Lisa gave her debut performance and Mrs. Cohen and the children were there to support her. She kept her promise to her mother, holding on to her music. The book ends with a letter to the reader and background information giving insight into Vienna during the war and why Mona wrote the book.

Award-winning illustrator Sonia Possentini uses pastel and gouache on watercolor paper to create a sense of movement and depth to the illustrations. As an Italian, Possentini is able to capture the essence of the European cityscapes in the illustrations, transporting readers into the era and emotional resonance of that time period. She uses light and dark contrast to highlight the importance of the theme on each page, whether light music against the dark piano or Lisa’s bright red coat. There are many full-page illustrations with text on the adjacent page, giving the images a chance to tell their own story. The font used is Bunyan Pro, which is based on a historic typeface that was used around the time Lisa would have been living. There is a great amount of detail in the faces throughout the book, highlighting the emotions of the characters and inviting readers to feel with the characters. The last images in the book are photographs provided by the family of Lisa Jura showing the family, Mrs. Cohen and the children at Willesden Lane, her playing piano, the Rachmaninoff sheet music she used in her debut and her certificate from the Royal Academy of Music. This is a true book of history and labor of love from Mona to her mother showing how even in persecution you can achieve your dreams.

Hold on To Your Music can be paired with the three chapter books written for different age levels. The Children of Willesden Lane: Beyond the Kindertransport: A Memoir of Music, Love and Survival (Golabek & Cohen, 2003) was adapted by Emil Sher in 2017 for young readers (The Children of Willesden Lane) and then made into this picturebook in 2021. An additional adaptation by Sarah J. Robbins was published in 2021, Lisa of Willesden Lane. Other possible book pairs include Irena Sendler and the Children of the Warsaw Ghetto by Susan Goldman Rubin and Bill Farnsworth (2011), The Butterfly by Patricia Polacco (2000), A Picture Book of Anne Frank by David Adler and Karen Ritz (1993), The Harmonica by Tony Johnston and Ron Mazellan (2004), and Hidden: A Child’s Story of the Holocaust by Loïc Dauvillier, Marc Lizano and Greg Salsedo (2014). Another pairing that features a contemporary Jewish protagonist learning about brave actions in the Sydney Taylor award winner Turtle Boy by M. Evan Wolkenstein (2020).

Mona Golabek was born in Los Angeles, CA and is a concert pianist. She has performed worldwide with many orchestras and won the Avery Fisher Career Grant. She also created the radio program “The Romantic Hours” that integrates classical music into stories, poetry, and letters. More information about Lisa Jura, Mona Golabek, and the Hold on To Your Music Foundation can be found at https://holdontoyourmusic.org.

Lee Cohen is a screenwriter, film producer, author, and editor from California. He coauthored The Children of Willesden Lane with Golabrek, but has also authored picturebooks, particularly the Rip Squeak series about a mouse and his friends. His documentary “Mona/Lisa” is in post-production.

Emil Sher was born and raised in Montreal, Canada but now resides in Toronto with his wife. He is a playwright, lyricist, author, and has written radio dramas. He has won many awards including a Canadian Screenwriting Award, a gold medal at the New York International Festival, and was a finalist for the Governor General’s Award.

Sonia Possentini resides in Northern Italy. She has a degree in Art History and teaches illustration at the International School of Comics in Reggio Emilia.  She has won many international awards, most recently the Italian Andersen Award for Best Illustrator.

WOW Review, Volume XIV, Issue 1 by Worlds of Words is licensed under a Creative Commons Attribution-NonCommercial-ShareAlike 4.0 International License. Based on work by Hollie Walters at https://wowlit.org/on-line-publications/review/xiv-1/6/