One Crazy Summer by Rita Williams-Garcia is about three African-American sisters, Delphine (11), Vonetta (9) and Fern (7) Gaither who take a summer trip from Brooklyn to Oakland, California in 1968, to meet their mother, Cecile, who abandoned them when Fern was a baby. The girls have been raised in Brooklyn by their father and his mother, Big Ma. While in Oakland, the girls hope to form a close bond with their mother and visit Disneyland; however, Cecile is hesitant to acknowledge their existence and sends them out daily to attend the People’s Center, a day camp run by the Black Panther party. 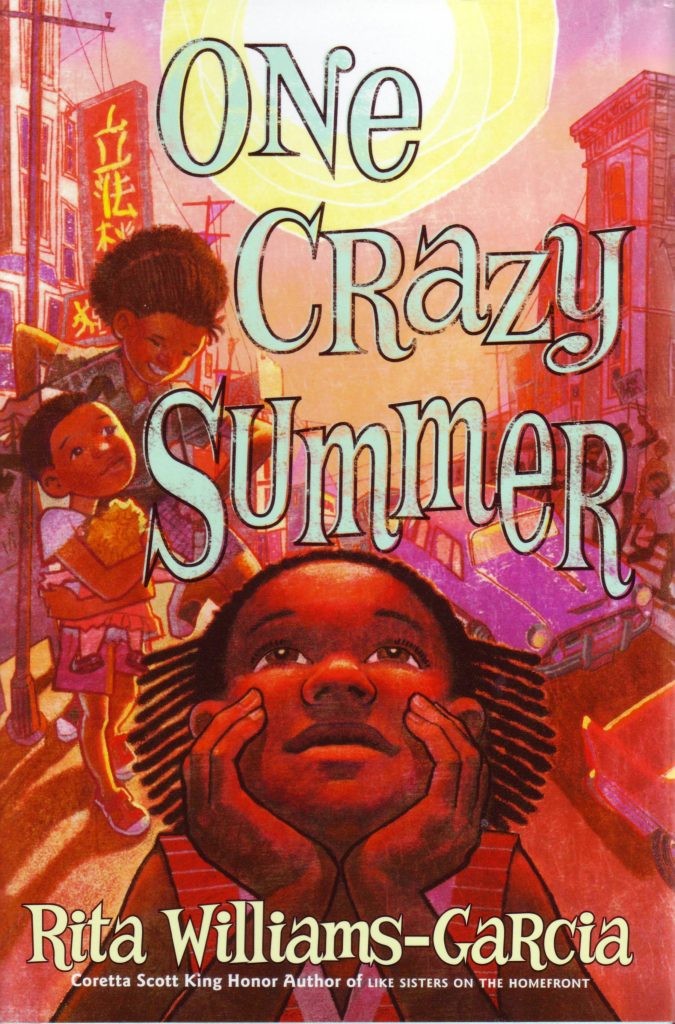 The Black Panther party was founded by Huey Newton and Bobby Seale as a means to combat the oppression of African Americans and to help build community and confront corrupt systems of power. The Black Panther Party had four desires: equality in education, housing, employment and civil rights. Although they instituted several programs to help the community including a breakfast program that fed school aged children in 19 cities and health clinics that provided physical exams, vaccinations and cancer detection screenings in 13 cities across the country, they became infamous only for their aggression towards police officers.

The Gaither girls experience a transformation while in Oakland, most prominently perhaps is Delphine’s. Delphine arrives in Oakland as a mini adult; she is the responsible one and accustomed to taking care of her sisters when Big Ma isn’t around. Delphine uses her Timex watch to keep track of everything, even the duration of each sister’s bath. She also takes care of her sisters when they are ill, for instance when Fern is unable to sleep because of a stomachache, Delphine sits up with her and rubs her stomach until she falls back to sleep, “I just let Fern carry on while I rubbed her stomach. It took a while, but she finally fell into sleep” (p. 102).

While at the People’s Center, Delphine meets kids her own age, in particular a boy named Hirohito, who help her feel and act like a youngster. Hirohito persuades Delphine to ride his go kart and she experiences the joy and freedom that kids do, rather than worry as an adult might. “I felt the rumbling of the wheels hitting every bump on the ground. I screamed so loud I startled myself. I had never heard myself scream” (p.190).

As the Gaither sisters engage in activities at the People’s Center, they learn more about African-American culture and struggle with views imposed on them by their grandmother, Big Ma, and the new perspective they learn at the People’s Center. As Fern and Vonetta gain more knowledge about their culture they too begin to gain a new understanding of what it means to be African American. For example, the girls arrive in Oakland with their hair straightened because Big Ma, feels that it makes them appear more presentable. When the Gaither girls’ hair returns to its natural state, Delphine immediately and frantically contemplates where to find a hot comb to straighten their hair.

Cecile overhears Delphine tell her sisters that their hair is “misbehaving” and that Big Ma wouldn’t like the way they present themselves to society. Cecile informs her daughters that their hair isn’t misbehaving–it is doing what it supposed to do, naturally. She encourages them to embrace their hair and see how beautiful it is in its natural state. The girls heed Cecile’s advice and embrace their new-found hair, wearing afro puffs even when they return to Brooklyn. As an African-American female growing up in the south, I have lived similar experiences related to my hair; I have changed my hairstyle from braids or cornrows to a straightened texture when going on job interviews. A school administrator once told me that my hair looked more professional straight versus its natural state.

Spending time with their mother in Oakland provides the Gaither girls with knowledge about their family and culture and also helps fill some gaps about things that occurred in their family. Prior to meeting Cecile, the girls have one perspective through which to see the world. After their visit, they see and live their world through a new lens. When we first meet Delphine, she is a mini-adult consumed with caring for her sisters and keeping them out of trouble, after spending time in Oakland she learns about her culture and also how to be a kid herself!

2 thoughts on “One Crazy Summer: Learning about Your Culture and Heritage”