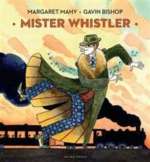 Mister Whistler is the whimsical story of a young man who wakes up with a song in his head and dance steps in his feet.

He dances and hums his way through putting on each item of clothing before going to catch the train to his aunt’s house. When he gets to the train station he puts his ticket between his teeth as he checks his pockets for his handkerchief.  He then dances his way across the platform to realize he doesn’t know where his ticket is. As he searches all his pockets for his ticket he dances himself out of his coat, jacket, waistcoat, shirt, trousers and all the way down to his underwear—still no ticket. The crowds have gathered and are loving his dance steps. When he takes off his hat to check the headband for his ticket his appreciative audience fill his hat with money.

When he realizes that his ticket is not in any pocket, he exclaims that he can’t find his ticket, only to see it floating to the ground as it flies out from his now-open mouth. He scoops it up and starts to get dressed again (trousers, shirt, waistcoat, jacket, coat—the now-familiar order), only to find he needs both hands to button his clothes and puts the ticket back between his teeth to free his hands. Mister Whistler has to hurry as the train has come and he jumps onto the train just in time as the crowds cheer him on. He goes to find his ticket again and when he laughs, remembering his ticket is now in his teeth, he swallows it! Luckily for him, he has the money in his hat from dancing, so he can buy a new ticket.

The text is lyrical, the words a song in their pacing. The tune in his head is part of the cadence of the words and the meter part of the putting on and taking off each item of clothing. As in Mahy’s The Moon and Farmer McPhee (2010) the words move from page to page with rhythm. While not a rhyming book (some of her books rely heavily on a rhyming scheme), it has a clear rhythm and cadence all its own.

The rhythm of the words is matched with Gavin Bishop’s charming watercolor wash illustrations to add lightness to Mister Whistler’s feet. His body moves throughout the book so we also get a sense of his dance and the music in his head (which also floats across the page.) Bishop has added wonderful details and visual humor. The woman in the advertising poster in the station, who sees him dancing and is aware of his lost ticket adventures from her spot on the station wall, ends up being the woman who is sitting in front of him on the train. The design on the end pages matches the design on the wall paper in his bedroom, which matches the design on his waistcoat. Some of the posies surrounding the train station end up in his hat and are also held in a little bouquet by the woman in front of him on the train. These sorts of lovely details and visual jokes add depth to the already-delightful story.

Both Margaret Mahy and Gavin Bishop have been working in children’s literature for a long time. They were both living in Christchurch when they worked on this book (and both were born on the South Island of New Zealand) and were friends. The way the text and illustrations mirror the same tone, flow, and whimsical character attests to their relationship and similar cultural understanding

Margaret Mahy, who was trained as a librarian and wrote her first published pieces in 1965, started writing full-time in 1980. After many years of writing and sharing stories and books with children, she died July 23, 2012–not living long enough to see this book in print or to know that it had won the New Zealand Post Children’s Book Award. She wrote over 100 books for children and also published for adults. In her career she won the Hans Christian Anderson Award from the International Board on Books for Young People and the Carnegie Medal from the U.K. 2 times. She also had numerous titles that were finalist or honorable mentions for awards.

There are many opportunities for pairing with this book as the theme and style lead in many directions. Thinking about losing something that is right in front of you would connect this book to Five Silly Fishermen by Roberta Edwards (1989) where the fishermen go out and worry they are coming back with only 4 people because they each forget to count themselves. In the way the story has Mister Whistler put on his clothes and take off his clothing items as part of the rhythm of the story, it would make a nice partner book to Sam and the Tigers (Julius Lester, 2000), where Sam gets his new smart outfit piece by piece, takes it off to give the tigers and puts it back on when they have run themselves to butter.

Yet another angle to approach this book would be to look at writing style or form. Mahy ends by speaking directly to the reader with a comment: “Wasn’t it a lucky thing he’d earned all that money with his wild dancing?” This is similar to what she does in The Great White Man-Eating Shark (1989) where she ends the book with: “Though he was a plain boy, he had made rather a good-looking shark, and I think he was very wise not to take any dangerous chances.” Mahy’s side comments to the reader could make an interesting look at writing style. Thinking about how the main character moves to the music—a book that has a real musical rhythm to both text and illustration, it could pair nicely with Charlie Parker Played Be-Bop by Chris Raschka (1992) where the words and music are not a song, but clearly have a musical rhythm to it and were inspired by a song. As Mahy was such a prolific writer, a study of a number of her books in tandem would be a rich experience—looking at how she uses rhythm and rhyme, how she tells a story, how she is informal, yet follows the conventions of a book…all could make for a wonderful author unit.

Mister Whistler is currently being published in the US as well as in New Zealand.