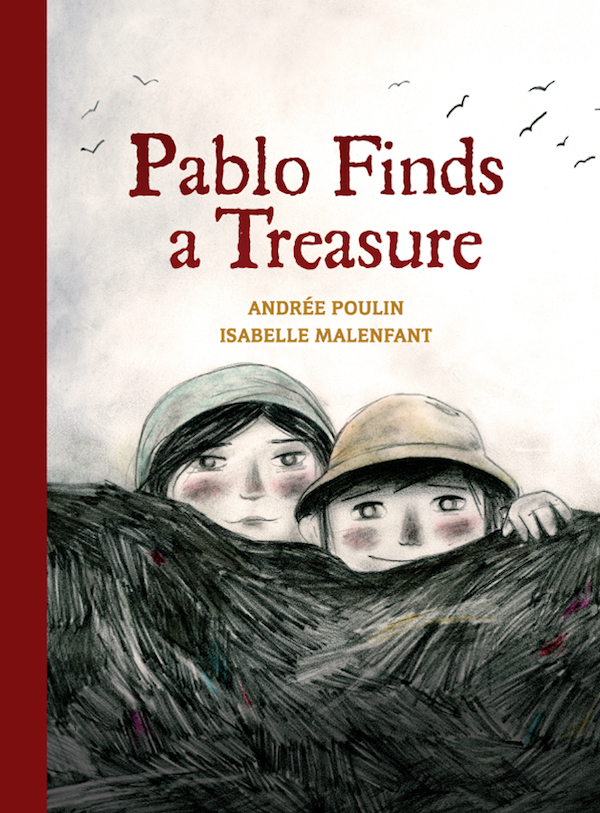 Early morning, Sofia awakens in shantytown and rouses her younger brother Pablo so they can begin their daily search for treasure. As Mama leaves for the market, the children head towards the treasure mountain where, with many others, they rush to search the mound just dumped by a truck. Ignoring the stink, Pablo and Sofia weave in and out of the crowd searching for treasures. Sofia gathers cans, glass, plastic, and scraps Mama can recycle and sell, while Pablo is more selective, much to Sofia’s dismay. She reminds him if they work hard, they might have enough money for Mama to purchase half a chicken for dinner. Pablo finds a book, while Sofia finds two wrinkled carrots they quickly eat. Pablo and Sofia manage to hide when the town villain, Filthy-Face, arrives and snatches the bags of children he can grab. When he leaves, Pablo and Sofia continue to search, though they are tired and thirsty from the heat, the flies, and the gases emerging from the garbage.

Then Pablo discovers a shiny gold chain they know will bring lots of money. As they dream of what the chain may allow them to get, Sofia pleads with Pablo to let her hide the chain since his pockets have holes. Filthy-Face notices the children and insists Pablo give him their treasures. Pablo and Sofia try to run but are caught and reluctantly give Filthy-Face their day’s bag of treasures. Slowly the children walk home. Pablo is silent while Sofia scolds at him for not giving her the chain to hide. When they arrive home, Mama asks what is wrong. After he closes the door, Pablo opens his mouth to reveal the gold chain on his tongue.

This poignant story powerfully shows not only life in a poverty-stricken environment but also the universal love of families, the relationships and playfulness between siblings, and the ingenuity and brilliant problem-solving abilities of children. The double-page spreads with loose rough charcoal sketches masterfully bring the stark bleak environment of treasure mountain to life and invite readers into the story. With selective touches of color on Sofia and Pablo and in the trash heap, Isabelle Malenfant inspires readers to hope. When Filthy-Face robs Pablo and Sofia of their treasures from the day and all seems lost, Pablo closes the door at home and opens his mouth. The ending of the story is told in the art; no more written text is necessary.

Andrée Poulin grew up in Orléans, Ontario, and now lives in Gatineau, Quebec. She was a journalist and worked in international development and has now written over 30 books for children that focus primarily on friendship, poverty, tolerance, and empathy. Andrée Poulin believes books can change the world and thus uses cultural settings such as Canada, Asia, and Africa for her stories.
Isabelle Malenfant graduated with a degree in Graphic Design from the University of Quebec in Montreal, where she lives. When she isn’t writing or illustrating, she likes to listen to music, sculpt, read, sew, and continue to read.

Pablo Finds a Treasure would work well in a text set with Ada’s Violin: The Story of the Recycled Orchestra of Paraguay (Susan Hood and Sally Wern Comport, 2016) and Mia’s Story: A Sketchbook of Hopes and Dreams (Michael Foreman, 2006). In these books, families need the trash in their environments to survive and all show the strength, creativity, and ingenuity of children.