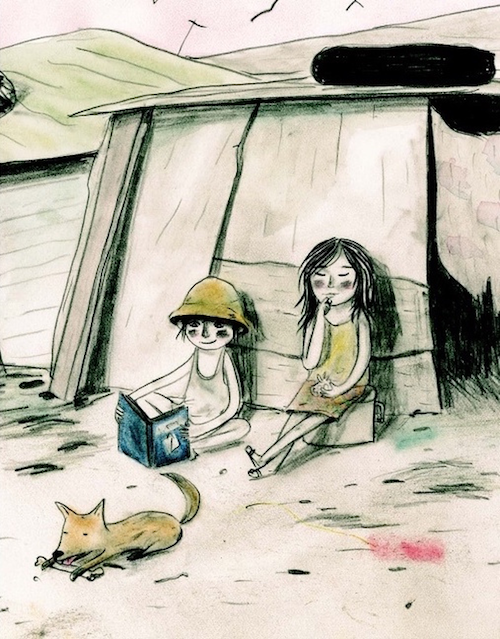 The mountain has many more scavengers upturning the filth with sticks in the hopes of uncovering something of value. The humongous dump smells disgusting but they continue to dig and dig. They look for recyclables, such as cans, pieces of glass, paper etc. that can be sold. They look happy enough in their present state as they unearth one shoe, a half-eaten carrot, and a torn up book. Education is secondary in their existence where food is scarce. Pablo thinks of the book as a treasure even though he cannot read. “He tells his sister, ‘I’d like to read.’ Sofia shrugs. What for? Reading won’t fill your stomach.” Pablo does find an actual treasure in the shape of a broken gold chain. When he shares the good news with his sister, they dream of different things that they desire in their immediate present and future. Things like food, books, and clothes.

The children contend with villain/bully named Filthy Face. His presence fills the children with fear because he takes whatever of value that the kids have collected. He discovers the excitement of Pablo and Sofia’s find and comes for their treasure. Pablo, resourcefully, hides the chain in his mouth and turns in the rest of his finds over. Thus, Pablo’s resourcefulness saves the day. The final image is of the two main characters sitting and looking smug. Pablo has his much-coveted book and Sofia has her food.

Even as this story ends well, what happens when the money from the sale of the chain runs out? Filthy Face seems to represent an older version of these same children and the true villain in this scenario is the dire circumstances that these children have to live through, unendingly.

The lack of amenities marks the lives of a myriad of children the world over. Books that reflect this theme are critical in expanding global perceptions of adults and children living in developed and affluent nations so that they are exposed to the reality of a great number of people within and outside of their neighborhood, cities, and countries. In the United States and Canada the condition of the reservations that the Native Americans live in are a present-day example of poverty and lack of resources.

Poulin eloquently exposes this aspect of poverty with her writing. She is an award-winning author of numerous children’s books. She lives in Quebec. Malenfant reiterates the plight of children living in poverty through her expressive visual art. Her illustrations speak volumes about the condition that these kids live through. She has illustrated more than a dozen children’s books and has won many awards. She lives in Montreal but was born in Quebec.