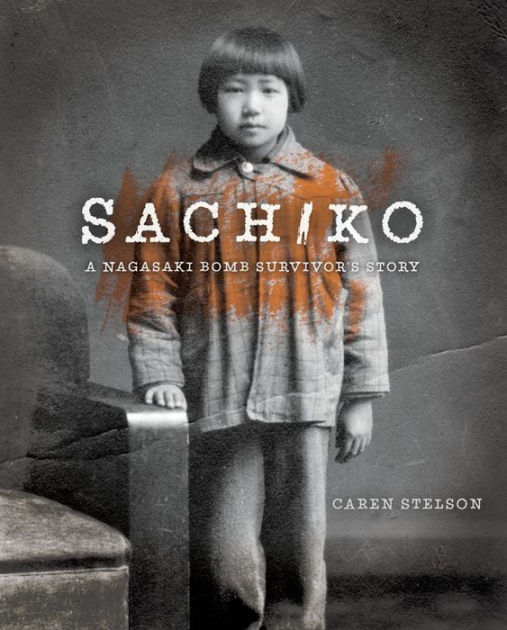 Sachiko Yasui was playing house with four other young children on a sunny August morning in Japan, patting mud into rice balls and seasoning them with grass. The air raid siren was silent; cicadas sang. And then—she tilted her head. Was that an airplane engine, whining above the clouds? It came suddenly: pikadon. “A brilliant light” + “boom”. It was the genshi bakudan—the atomic bomb. Sachiko was only 900 meters from the hypocenter.

The bomb that signaled the end of World War II was only the start of the struggle for Sachiko and her surviving family. Organized chronologically and told in the third person, this powerful book relates the story of Sachiko’s life from that day onward. Readers will learn not only about the immediate aftermath of the Nagasaki bombing, but the lifelong effects that the radiation and trauma had on Sachiko and other hibakusha—those who survived the atomic bomb. The narration brings readers into Sachiko’s story with powerful immediacy, bearing witness to the horrific realities and repercussions of that day and to the resilience of Sachiko and other hibakusha like her—like the camphor trees that blossomed again the year after bomb, despite their scars.

The book begins with an epigraph from Sachiko Yasui herself: “What happened to me must never happen to you.” After hearing Sachiko speak at a Twin Cities 60th anniversary commemoration, Minneapolis-based author Caren Stelson reached out and began an extensive five-year interview process with Sachiko. Stelson also worked with the Saint Paul-Nagasaki Sister City Committee in this process. Translators Dr. Takayuki Miyanishi in Nagasaki and Keiko Kawakami in Minnesota helped her understand not only the Japanese language, but important aspects of Japanese culture, such as the symbolic strength of camphor trees in Sachiko’s story.

Stelson traveled to Nagasaki multiple times to interview Sachiko, and while there she spoke with experts, studied the city’s history and culture, and visited memorial and educational sites. In 2012, Stelson’s work resulted in a scholarship to travel to Hiroshima and participate in the Hiroshima City University’s week-long peace symposium. Although Stelson had previously written about aspects of WWII, she immersed herself in literature about the War in the Pacific from various perspectives. Stelson also researched extensively on Martin Luther King, Jr., Helen Keller, and Gandhi when Sachiko cited them as life-altering influences.

With this book, Stelson offers a thoroughly researched, culturally sensitive, and beautifully rendered portrait of Sachiko’s life and thoughts as related by the survivor herself. Without flinching from the hard truths of the atomic bomb and its aftermath, Sachiko offers an illuminating tale of the journey from devastation to peace and purpose.

Stelson’s book has garnered considerable praise since its publication in 2016, including the 2017 Robert F. Sibert Honor Award, the 2017 Orbis Pictus Award for Nonfiction, and the 2016 Cybils Award for Middle Grade Non-Fiction. The narrative structure of Sachiko lends a sense of immediacy and emotional impact for readers, helping them developing empathy and engage with diverse global perspectives. The inclusion of factual “inserts” about the topic at hand—related to Japanese history or culture, American perspectives, or WWII generally—offer important context for young readers. The photos throughout put faces to the names in Sachiko’s story, and a reality to the atomic devastation she describes. The end of the book includes an Author’s Note with some information about Stelson’s process, a Yasui family tree, and a glossary of Japanese words with Japanese characters, phonetic pronunciations, and Romanized spellings help English readers better understand unfamiliar content and its significance. A section with further notes on the book’s factual inserts is also included, as are acknowledgments from the author, a bibliography, a thorough list of other useful resources, and an index.

One text focusing on the effects of the atomic bomb, children’s advocacy, or peace movements is The Complete Story of Sadako Sasaki, co-authored by Sadako’s brother Masahiro Sasaki and Peace Crane Project founder Sue DiCicco (2020). A text about child peace activists elsewhere in the world is Dear World: A Syrian Girl’s Story of War and Plea for Peace by young Syrian refugee Bana Alabed (2017). A text that connects Sachiko’s admiration of peace leaders Gandhi and Martin Luther King Jr. is The Radical King, a selection of speech excerpts edited by Cornel West (2019). This book includes a discussion of how Martin Luther King Jr.’s nonviolence methods were directly influenced by Gandhi himself.

For more information on Caren Stelson’s background and writing process, visit her website or read the interview at https://lernerbooks.com/contributors/14042.

WOW Review, Volume XIII, Issue 4 by Worlds of Words is licensed under a Creative Commons Attribution-NonCommercial-ShareAlike 4.0 International License. Based on work by Julia Andersen at https://wowlit.org/on-line-publications/review/xiii-4/10/