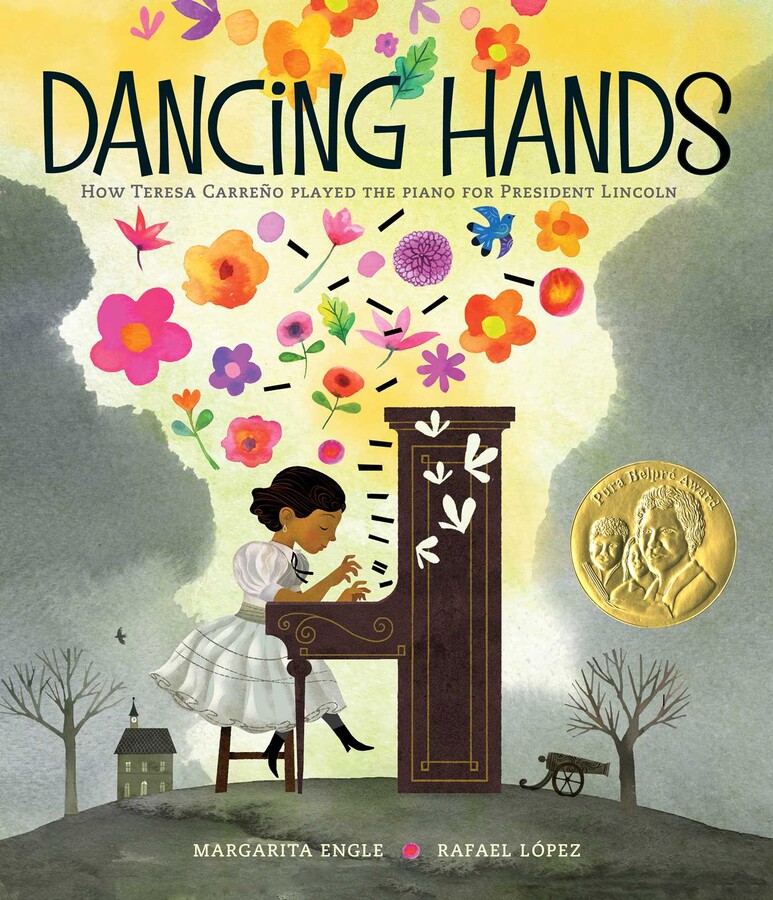 This picturebook recounts Maria Teresa Carreño’s historic visit to the White House to play the piano for Abraham Lincoln. Engle carefully crafts a story of the tiny but fierce musical prodigy that hums in a waltz of symmetry and contradiction to Rafael López’s carefully crafted mixed media illustrations. On the cover Teresa Carreño is depicted playing a piano. Her hands are dancing across the piano and the dark keys of the piano float into the sky along with flowers and sunshine. An aura of her tropical homeland of Venezuela surrounds and protects her as the dark gray tones of the South American revolutionary war and the unknown fog of emigration to the United States encroach upon the lighter tones of her childhood innocence. Within this contrast, Teresa’s figure is framed–a Latina in a white dress bowing her head in concentration as she plays the piano. López’s art juxtaposes how the complexities of Carreño’s journey as a childhood prodigy, immigrant, and international figure can show us how music reconciles the dark and light sides of grief, war, and change.

Although the book is written for upper elementary students, the themes of loss, isolation, and gender discrimination have far-reaching implications for teenage and adult audiences. The crisp illustrations carefully beg the pondering of deep questions: How is music a universal language and how do we use music to connect with others, especially those who are unfamiliar? How do we use our own talents to assert our self-value and overcome the challenges of life? How can we use our passion to challenge the prejudices of the dominant society that may be applied to us and used to question our rightful place in society?

For me, as a Venezuelan-American, this book is life-changing. As a young girl, I knew of Teresa Carreño’s legacy. When my mother and I lived in Caracas, Venezuela (Maria Teresa’s birthplace), we would trek along la Avenida Paseo Colón and pause at the Teresa Carreño Cultural Complex. We would sit on a bench along the opposite street or within its gardens and I would listen to my mother tell stories of this great woman, whose music still to this day moves Venezuelans with her melodies as a symbol of national pride. My mother reminded me, as does Engle’s author’s note at the end of the book, that despite her natural ability to woo international audiences, she still had to overcome the stigma of being a free, entrepreneurial woman who “divorced three times before finding happiness with her fourth husband”. Thus, Teresa Carreño’s story is one that serves to teach girls how important the fierce determination of the heart is in moving mountains and nations and paving the dreams of girls everywhere who are inspired by her resilience and fortitude. Teresa Carreño was not dubbed Le Leona (The Lioness) for kowtowing to dominant ideas of gender roles in her time.

Illustrator Rafael López was born in Mexico City and lives in San Diego. His legacy is defined by his art. He is an internationally recognized illustrator holding multiple honors including the 2017 Tomás Rivera Children’s Book Award, two Américas Book Awards, and three Pura Belpré honors. Among other diverse projects, his Urban Art Trail Movement seeks to bring diverse communities together through the creation of large-scale murals that can be found across shared communal spaces such as children’s hospitals, public schools, and under freeways. He also created two official posters for the Obama presidential campaign in the 2008 and 2012 in an attempt to secure the Latinx vote.

WOW Review, Volume XIII, Issue 4 by Worlds of Words is licensed under a Creative Commons Attribution-NonCommercial-ShareAlike 4.0 International License. Based on work by Francis Maffi-Mahmood at https://wowlit.org/on-line-publications/review/xiii-4/3/