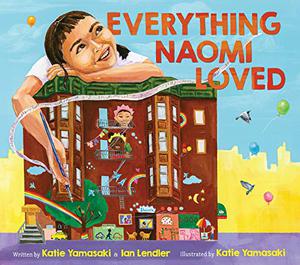 Everything Naomi Loved invites the reader/viewer into a neighborhood community experiencing change brought on by gentrification in a U.S. city. We accompany Naomi as she says goodbye to her friends and neighbors one by one when their homes and businesses are sold, torn down, and replaced with buildings advertising “luxury living.”

The first pages provide insight into Naomi’s world before gentrification begins. Readers are immediately invited into her community through the illustration on the first page, a bright image of Naomi smiling, flanked by a rainbow, looking out her window towards the street. The next page, a double-page spread, shows the reader her view of a neighborhood as a community that is “alive” (p. 2). Apartment buildings and businesses are side-by-side with cars driving by, bicyclists sharing the road, and a sidewalk filled with pedestrians and street vendors. Balloons inch toward the sky. The colors are warm and vibrant; the sky is a happy yellow. Yamasaki’s illustrations are beautifully rendered to reflect the look and feel of murals with bright colors and large images of meaningful people, buildings, and objects.

Readers learn about all the things Naomi loves: the beautiful tree near her apartment building, the creation of images with sidewalk chalk, the local business owners, and most of all her friend, Ada. Then Naomi learns that a new building is coming, most likely to replace something that will be torn down. It ends up that “something” is Naomi and Ada’s beloved tree. Mister Ray, one of the local business owners, offers to paint a mural for them to remember it. He says what becomes a repeated mantra throughout the text, “Things change” (p. 13). He explains that, where he is from, murals are painted in remembrance of what has been lost.

As Naomi’s neighborhood continues to be gentrified, more and more things are added to the mural, including Ada, whose family must move away after their apartment building is sold. Finally, the story reaches its climax when Mister Ray must close his business. Naomi and Mister Ray paint a mural of each other to say goodbye. The book ends as Naomi’s family finally must move. After the mural wall is torn down to make space for more new luxury apartments, she keeps a piece to take with her to her new neighborhood. The book ends on a hopeful note that “a new world will grow” (p. 36) in Naomi’s new home.

Everything Naomi Loved does not shy away from the changes, often unwanted, that gentrification brings, changes which are often invisible to those who move into a newly gentrified space. The illustrations and text sensitively honor what is lost because of gentrification–actual communities and relationships, not to mention homes and businesses–while still maintaining a sense of hope as displaced people start over in new spaces. This makes the book appropriate for all ages, for those experiencing gentrification in their own neighborhoods and for those who may benefit from or are uninformed about gentrification. It would be a worthwhile introduction to a social science unit focused on housing and economic inequality, redlining, structural racism, urban blight, voting rights and representation, and other issues related to gentrification.

Texts that would pair well with Everything Naomi Loved include Africville by Shauntay Grant and Eva Campbell (2018), Fly Away Home by Eve Bunting and Ron Himler (1993), This Side of Home (2017) by Renée Watson (2017), and Halsey Street by Naima Coster (2018). Another pairing is the article “They Just Moved into an Austin Neighborhood. Now They Want to End One of Its Traditions” by Peter Holley (2021).

Co-author and illustrator Katie Yamasaki is a native of Detroit and has taught Spanish both there and New York City. She is a muralist, having come to recognize the power of symbols after 9/11. Her grandfather was chief architect of the Twin Towers and experiencing the way those buildings were used as symbols for the pro-war movement caused her to think about the power artists have to create community symbols. This influence is clearly seen in Everything Naomi Loved with Mister Ray’s, and later his and Naomi’s, murals containing representations of the people who gave Naomi’s neighborhood its vitality and who were lost to gentrification. Readers understand the importance the murals have as symbols to Naomi’s community. More information on Katie Yamasaki is found at her website.

Co-author Ian Lendler is an award-winning writer of several books who lives in the San Francisco Bay area. For more information, visit his website.

WOW Review, Volume XIII, Issue 4 by Worlds of Words is licensed under a Creative Commons Attribution-NonCommercial-ShareAlike 4.0 International License. Based on work by Amy Burke at https://wowlit.org/on-line-publications/review/xiii-4/6/