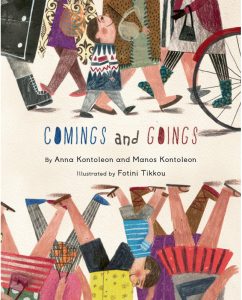 Comings and Goings invites readers to consider a young boy’s experience in a nuclear family that lives at a distance from their extended family. Presented in alternating locations – north and south – it tells the story of Alex who lives in the “north” and is preparing to travel alone to visit relatives in the “south.” In the opening pages, the illustrations show a rainy “north” and a sunny “south,” but the exact location of the families is never specified. The book was published in Greece and then translated for publication in the U.S., so the assumed location might be Europe.

In the north, Alex is excited and nervous about flying on his own. He carefully selects his favorite toys, books, and games to pack in his new suitcase. He shops with his mother for gifts to take to his relatives. Alex draws pictures for each of his family members living in the south and picks out clothes for visiting a warmer climate.

Meanwhile in the south, Alex’s relatives prepare for his visit. Grandpa Leander checks the weather for Alex’s flight day. While Grandma Alexia makes the bed where Alex’s mother used to sleep, she thinks of stories she will tell Alex about his mother when she was a child. Aunt Sophie finds a perfect book, and Uncle Mike rehabs a bicycle for his nephew. Alex’s cousins buy a train set so they can play with it together.

At this point in the book, there is a brief break in the alternating pattern with a set of double-page spreads for the final preparations in each location. The alternating pattern returns until Alex arrives in the south. The remaining double-page spreads focus on his arrival, ending with a group hug with Grandma Alexia. Aunt Sophie, and the twins and the “welcome” banner held by Grandpa Leander and Uncle Mike.

The illustrations capture the anticipation of meeting distant loved ones through a mix of collage, colored pencil, photographs, and charcoal. The opening portraits of the characters set the stage and the contrast between “north” and “south” environments is carried effectively throughout the story. Illustrator Fotini Tikkou includes a compass rose in the corner of each page; one representing the north in the upper left-hand corner and one representing the south in the lower right-hand corner of the alternating double-page spreads. The endpapers are world maps with North America on the upper left and Europe and Asia on the right.

A critical view of this book could include the non-specific locations portrayed in the Comings and Goings. The lack of cultural specificity in the story and illustrations could be a criticism of the book; it may also allow global readers to identify more readily with Alex’s journey. Reading left to right and high to low, a reader could see “privilege” in the north and think of the south as less privileged by the placement of the south icons at the bottom of the right-hand pages. However, the story itself contests that assumption. The strong familial ties and loving extended family portrayed in the book may convince some readers that although Alex will miss his father, mother, and dog in the north, he will thoroughly enjoy landing in the caring arms of his family in the south.

Comings and Goings can be paired with picturebooks that are culturally-specific and center on children traveling distances to be with family members. In Amah Faraway by Margaret Chiu Greanis and illustrated by Tracy Subisak (2022), Kylie and her mother travel from the U.S. to be with Kylie’s amah/grandmother where she learns more about her family’s heritage culture and the Taiwanese language. Where Three Oceans Meet written by Rajani LaRocca and illustrated by Archana Sreenivasan (2021) tells how a young girl named Sejal, her U.S. immigrant mother, and Indian grandmother/Pati travel from Bangalore to the southern tip of India sharing languages and other cultural connections along the way. In The Yellow Suitcase by Meera Sriram, illustrated by Meera Sethi (2019), the plot revolves around a yellow suitcase Asha always carried from California to India to visit her beloved grandma whose funeral her family is attending.

Comings and Goings was selected for the 2022 Outstanding International Books List. The book was originally published in 2017 by Kaleidoscope Publications. Star Bright Books translated the original Greek text and republished the book in English in 2021.

This book is the first collaboration by authors Anna Kontoleon and Manos Kontoleon, a daughter-father team. Anna, a children’s book writer and translator, won the 2012 Greek IBBY award for The Seven Lives of Kombos. Manos, a popular Greek children’s author, has earned many awards. They live in Athens and report that the characters in Comings and Goings‘ characters “resemble us a little.” Illustrator Fotini Tikkou is a freelance illustrator of children’s books, patterns, and handmade ceramics. She studied at the Athens School of Fine Arts and lives in Copenhagen.

WOW Review, Volume XIV, Issue 3 by Worlds of Words is licensed under a Creative Commons Attribution-NonCommercial-ShareAlike 4.0 International License. Based on work at https://wowlit.org/on-line-publications/review/xiv-3/4