We formed the Lakeside Global Community in San Diego County, California to best serve students in our schools. Our main goal was to enrich the cultural component of our language immersion programs through children’s literature by acquiring picturebooks that truly represent the diversity, culture, and depth of the Spanish language in all its variations.

Each member of our global literacy program teaches in the Spanish language immersion programs that our school district offers, but at different school sites. Our district has a total of eight schools, two of which are middle schools. The language immersion programs are offered at both middle schools and three of the elementary schools. Students who are enrolled in the immersion program are predominantly white from English-speaking households and they enroll in the immersion program in kindergarten, first grade at the latest. They are fully immersed in the language since their first day of kindergarten and by the second trimester of second grade, they start receiving an hour of English instruction within their school day. Each school year the percentage of English instruction increases and the percentage of Spanish instruction decreases until they reach fifth grade. By that point they should be receiving 50/50 instruction in both languages.

Once students enter middle school, their classes are in English except for two periods of the day when they have social studies and Spanish literature in Spanish. Most of the books to which students have access are merely translated from English to Spanish rather than having been written, and illustrated, by an author who authentically speaks the language and lives in a Spanish-speaking country. Students had been missing out on the richness of being exposed to other cultures through illustrations that depict a different way of viewing the world, as well as learning about different ways of expressing emotions, ideas, thoughts, and so forth.

Our group sought out books that would represent as many Spanish-speaking countries as possible in order to provide students with access to a wider variation of expressing oneself in Spanish by learning about the different Spanish-speaking cultures that exist through picturebooks.

Learning about New Resources as a Study Group

Initially our focus was to use children’s literature to enrich the language learning experiences of students through offering books by authors and illustrators from countries in which Spanish is spoken. However, we quickly realized that it was us, teachers, who needed to learn more about these resources in order for our teaching to be truly effective. In our group, many of us became teachers in a language immersion program because we are native Spanish speakers; however, we are not necessarily trained on how to teach in a language immersion program. We found ourselves in a situation where we learned by teaching in this context.

In the elementary school setting, we use district-adopted curriculum and guide our teaching through the California state standards. The district-adopted curriculum has always been designed for use with native Spanish speaking students. We have not used any other curriculum specifically developed for students who are learning Spanish as a foreign language at the elementary school level. The new books we are now being exposed to offer us a window to a different way to see the world. We have found these new authentic picturebooks to have a sense of magic, mystery, and excitement due to the way in which the illustrations depict faraway lands that we know little about. From our team, three members who were born abroad, had already been previously exposed to these kinds of books, but the rest of our members are Spanish native speakers who were born and raised in the U.S. and as a result have had different experiences. 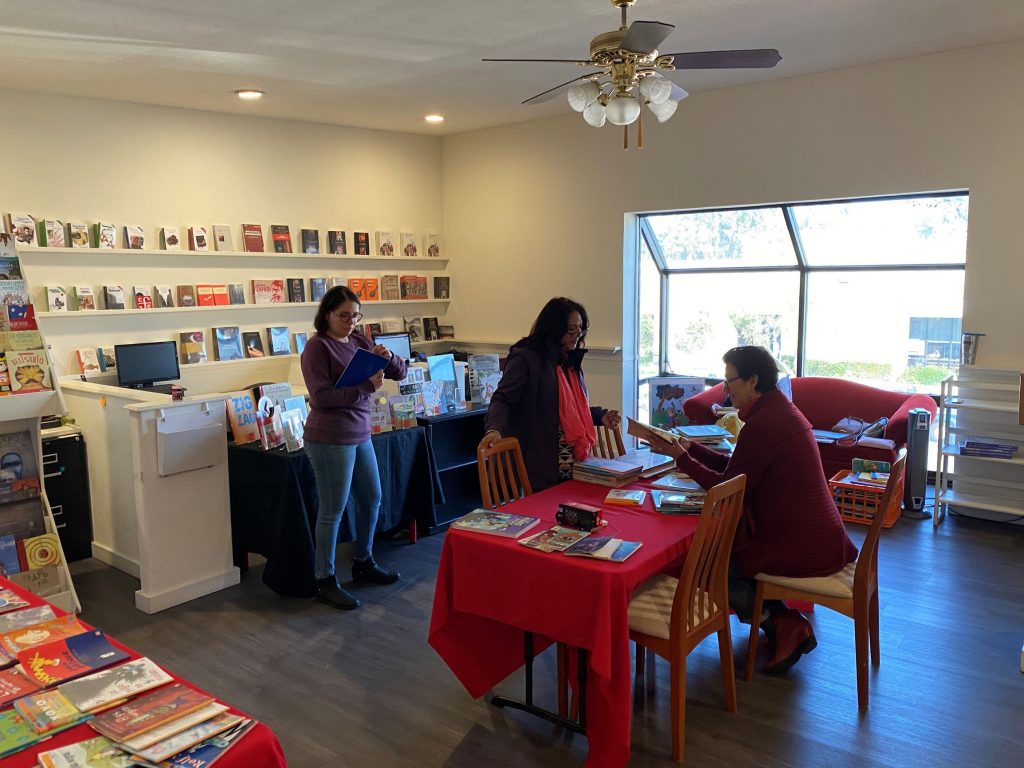 The discovery of these new sources of children’s literature was significant for us since we were used to acquiring materials from district sources which have not been authentic texts traditionally. Our group worked together to find the type of books that would depict a richness of the different types of cultures that exist within the Spanish-speaking world and in the process we learned a lot about ourselves and about each other. One of our members was able to bring picture books back directly from the countries of Colombia and Perú. Also having the realization that right in our neighborhood El Fondo de Cultura Económica has its U.S. headquarters was a discovery and a new source of materials.

Also, we had the opportunity to learn more about organizations, both public and private, as well as academics, researchers, and publishing houses, whose work will help us have a better understanding of the field of children’s literature in the Spanish speaking world. A list of these sources can be found at the end of this article. As a study group, we found that conflicts of personal and work schedules to plan meetings was at the top.

Our main discovery was that we, the teachers, became the students. Our field trip took place to the offices of El Fondo de Cultura Económica on a Saturday morning, where we were given a dedicated visit. They kindly adjusted their schedule to meet our needs on a weekend. Teachers who attended the meeting were able to decide which books to purchase from this publishing house. They guided us through their collection, and we discussed the possibility of having their book truck visit our school sites, possibly during open house night, the International Fair and Fall Festival. None of these materialized due to the pandemic, but we want to pursue these opportunities in the future. 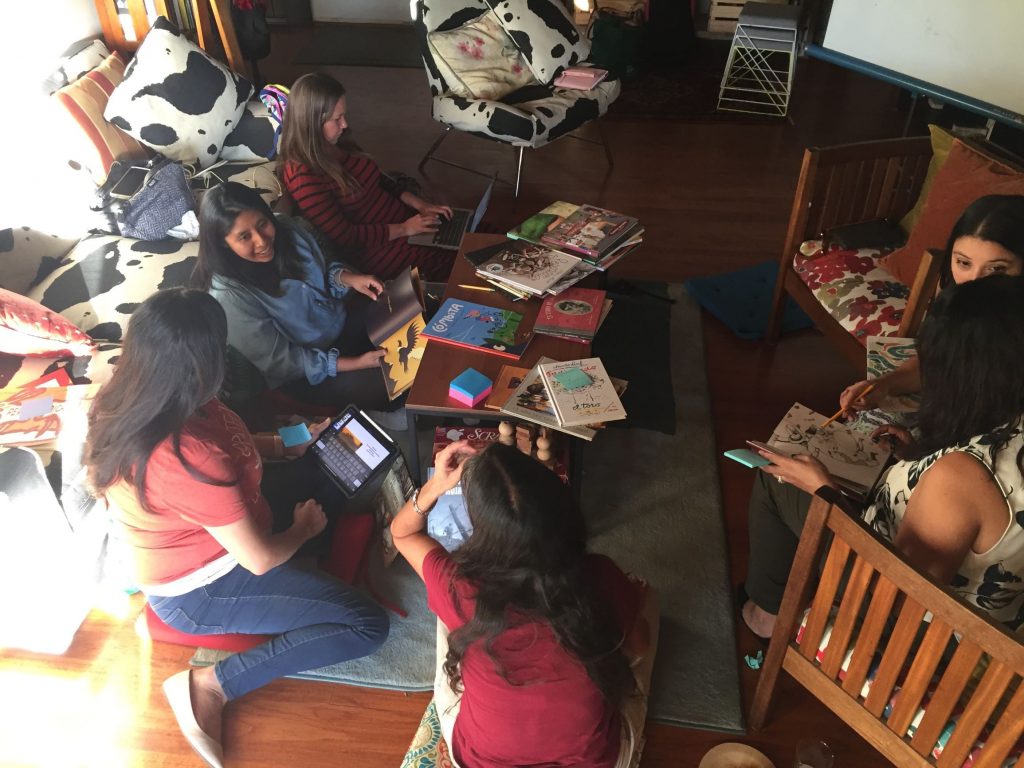 When we met together as a study group, we discussed what types of books we thought we needed in order to improve our instruction with regard to culture. We worked together to classify them and decide how we might use each book to deliver instruction depending on our focus. This remains an ongoing task.

The themes that are present in our new collection force us to consider topics that we have not yet discussed with students due to limitations placed upon us by the school district or by those who believe that children shouldn’t be exposed to sensitive issues. Although we see these books as strong, we are unsure about whether we can bring all of them into the public school system. No matter what, the books have been a source of rich and meaningful conversations among those of us in the Lakeside Global Community. Within our group, although all of us are Spanish Immersion teachers, we did not always agree on which books would be acceptable to introduce to our students. Some members of our group have been more assimilated than others and felt that many of the picturebooks that are common in Spanish speaking countries were not appropriate for our students, due to concerns about parent complaints.

We divided the books we located according to:

Multiple purposes or functions: the books have multiple purposes that vary by grade level and language acquisition level. Some books lend themselves easily for grammatical use, so that an ABC book could be used for the alphabet or for experiences around adjectives. Another small picturebook focused on verbs and nursery rhymes was perfect for the upper grades in grammatical study as well as to enjoy with young children. These books could also be used for content delivery for social studies, Spanish literature, science, geography, art.

Visual content/appeal: categorized by illustrations that depict challenging subjects such as violence, war, poverty, neglect, migration. An important category was about migrant experiences. Other categories included race, point of view, respect towards nature, popular sayings and local expressions, daily life, and informational books with depictions of landscapes and wildlife of Latin America.

This link provides a pdf of the books we purchased in our trip to El Fondo de Cultura Económica.

Due to the pandemic, our school year was cut short, and we were not able to carry out our next steps to fulfill our plan of action. Now we are trying to figure out ways to adapt the use of these books in our classrooms. We have been informed that if we do go back to the classroom, there will be no sharing of any items allowed, and so we might have to share our books virtually without infringing on copyright laws.

Given the circumstances, we feel that we are just beginning; that our discoveries and learnings have just started. As we learn as educators, our students’ chances of receiving more insightful experiences in the new language they are acquiring is bigger and better. Beyond these borders resides the richness of our common humanity along with our unique differences and characteristics. When exposed to the best we can offer, children become aware of the nuances in language and culture and, as a result, are more aware of what unites us than what separates us, more willing to build bridges than walls. That is our hope for the future.

Resources for Books in Spanish

1. Fundación Cuatrogatos based in Miami, Florida

2. Adolfo Córdova, from Mexico, and his blog about children’s literature in Spanish, Linternas y Bosques

3. Ana Garralon from Spain and her blog

Ekaré from Venezuela, Chile and Spain

A Buen Paso from Spain

Rosario Obregón is an involved parent and member of the community at Lakeside as well as founder of Mi Primer Libro Perú, an organization that promotes reading in early childhood in Perú.

© 2020 by Cristal Herrera and Rosario Obregón

WOW Stories, Volume VIII, Issue 2 by Worlds of Words is licensed under a Creative Commons Attribution-NonCommercial-ShareAlike 4.0 International License.
Based on a work by Cristal Herrera and Rosario Obregón at https://wowlit.org/on-line-publications/stories/volume-viii-issue-2/6/.