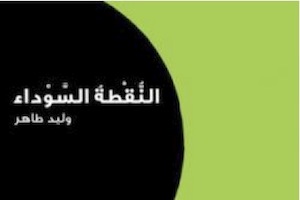 Children wake up early one morning to find a big black dot landing on their playground. When they cannot find out where it came from, they start thinking about how to get rid of it. They try several things but nothing works so they all decide to live with it and play the only game they can–hide and seek. All the children are satisfied with this solution, except for Marwan. While the children are playing, Marwan keeps thinking about the big black dot and finds a way to demolish it peacefully. He starts working on his idea by himself when the other children refuse to listen to him. After days of hard work the children notice that Marwan’s idea is working, so they join him one by one. They finally knock down the big black dot with one of the children still wondering where it came from. Now it becomes the ants’ problem.

The writer/ illustrator of this children’s book, Walid Tahir, works as an illustrator for a magazine in Cairo, Egypt. The Black Dot won the writer his second prize, Alettisalat 2010, the top prize for children’s books in the Arab world (from Asharga, UAE).

The final sentence in the book states, “Whether hard or easy, the most important thing is that there is a solution.” This book relates to the events taking place in Egypt recently. It is a call for the youth not to accept the status quo and to do something to change it. Eventually, the change will take place when one person finds a solution and keeps working at it. Although the idea seems to be too big to be digested by young children, the writer makes it simple in a funny way.

Children of all ages like this book. The aim of the story for Ahmed, an eleven-year-old boy, is that nothing is too hard if one has determination and faith. He did not like the character that kept asking the dot, “but who are you?” Another child, Khaled, found the character that kept asking funny questions and liked the solution that worked out for Marwan. A nine-year old girl, Mada, commented that she liked collaboration to get work done, but most of all she liked the happy ending of the story. None of the children we talked to related the book to the political events taking place in their part of the world. 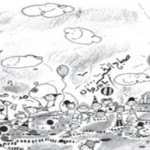 The illustrations of this book are unique in their detailed simplicity. The illustrator uses simple lines and colors to show feelings of wonder, sadness, boredom, happiness and pride. No adult is shown in this world of children, either in the text or in the illustrations indicating, perhaps, that change can only come from the young who are less harmed or cynical. Readers can only wonder if this writer was aware of what was going to happen in Egypt!

Although The Black Dot is a picture book, this book might have greater meaning for older children than for younger ones, because of their ability to grasp the theme in light of larger global issues. A search for other Arabic books on social change to be paired with this book was not successful. However, The Giver by Lois Lowry (1993) was translated to Arabic. Alwaheb (The Giver), tackles the same subject in a similar way. Jonas, who lives in a world of similarity, starts to notice the unfairness of not having a choice. In the end, he single-handedly decides to make the change that no one thought of making.

An ethical question always comes to mind when talking about change: How far can we push children against their families’ will? Who determines whether this is a call of change or a call for creating rebels that can work against their own societies?

WOW Review, Volume III, Issue 4 by World of Words is licensed under a Creative Commons Attribution-NonCommercial-ShareAlike 4.0 International License. Based on work at https://wowlit.org/on-line-publications/review/iii-4/