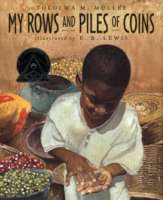 A young boy, Saruni, who lives in Tanzania in the 1960s, helps his mother take items to the market to sell. He is given five ten-cent coins for his effort. As he walks the market looking at the goods that are for sale he eyes a bike that he would like to buy. Throughout the story he saves his small earnings so he can buy a bike of his own in order to help his mother deliver her goods to the market. After months of working and saving his money, Saruni takes his coins to the bicycle seller. He very proudly tells the man that he has three hundred and five shillings to buy the bike. The man responds with humiliating laughter and walks away. Saruni walks away deeply disappointed. He tells his mother and she is touched that he was saving money to help her. The next afternoon his father comes home with a pikipiki, motorbike. He tells Saruni that he can buy his bicycle from him since he no longer needs it. Saruni’s parents give him his money back as a payment for his help. Saruni continues to save his coins. This time he wants to buy a cart to pull behind his bicycle to further lighten his mother’s load to the market.

Determination and generosity are at the heart of this story. The story contains universal experiences, such as, the pride in working hard and saving what you’ve earned, gaining a new skill, and doing things for others rather than yourself. Mollel integrates the boy’s goals throughout the story, making these experiences flow naturally and never seem overly moralistic or preachy. Children can connect to the character and learn about a culture that may be unfamiliar. They will learn that in Tanzania it is chilly during our summer months in the U.S., that women play an important economic role within their family, and that something as simple as a bicycle can be an important economic asset. In his author’s note Mollel explains that even today bicycles are too expensive to buy for recreation and that a family might purchase a bicycle for work or as their only means of transportation. This book also contains a useful glossary which shows children how to pronounce the native words as well as what the words mean.

Tololwa Mollel draws from his personal experience of living in Tanzania as a young boy. Mollel gives the references for historical background at the end of the book and weaves the language of the area within the text. He captures the importance of family that is apparent within this African community. The illustrator, E. B. Lewis creates pictures using watercolors that capture the feel and details of a rural Tanzanian community. The beautiful illustrations depict an African country in a non-stereotypical and authentic manner. Some of Mollel’s other books include, The Orphan Boy (1995), Rhinos for Lunch and Elephants for Supper (2000), Song Bird (1999) and Dinner, for Dinner (2000). This collection of stories, heard by the author as he was growing up, can be shared with young readers as they consider the tales that may have influenced Saruni in the book reviewed here. Mollel’s books have been published in Canada, the U.S., Australia, England, and Tanzania where he was born. His books have also been translated into various South African languages and into Korean.