Widening the World: Mapping Global Literature in a Kindergarten Classroom

I consider myself lucky to teach in school where diversity and culture are valued through celebrations and classroom studies. There are many cultures that make up my school community and each student is exposed extensively to the world’s geography. However, as I attended our Teacher Talk meetings each month, I began to wonder how much of the literature that the students at my school were exposed to was reflective of multicultural or global literature.

One afternoon, I sat down in my classroom library and read through and examined the books. I tried to categorize the books that fit into a global idea or theme. I came up very short with that pile. So I closely examined the books to look for experiences of the characters that could be connected to a human experience, one that is shared by people around the world, along with my students. There were several more books that I had come across in my library once I applied this view of global literature to my search. Among them I found: A Birthday Basket for Tia by Pat Mora (1997), Gabriella’s Song by Candace Flemming (2001), Wombat Divine by Mem Fox (1999) and Olivia by Ian Falconer (2010).

My goal was to take these books and bring them to the forefront of my classroom in order to go beyond what Kathy Short (2009) calls “the tourist perspective”, the surface-level information about another culture. Instead, I wanted to bring the idea of a common humanity to my students as well as opening up the world spatially to them to see where these stories were taking place. I wanted them to know that people/characters from other cultures can have similar experiences to them and that stories don’t just come from the people in our culture, state, country.

I understood that as concrete thinkers, my kindergartners would need some visual representation to serve as a reference point for our discussions. I was inspired by reading the vignettes of other Worlds of Words literacy communities and all the work that they did with their students to “build bridges of understanding across global cultures”. In particular, the mapping that was done by Van Horne Elementary School was helpful to encourage the development of conceptual thinking and to offer their students a way to organize their responses to changes and journeys within the literature that they were reading. I took their idea of mapping very literally and went out and purchased a large world map that served as a visual of all the stories we read and where they came from. 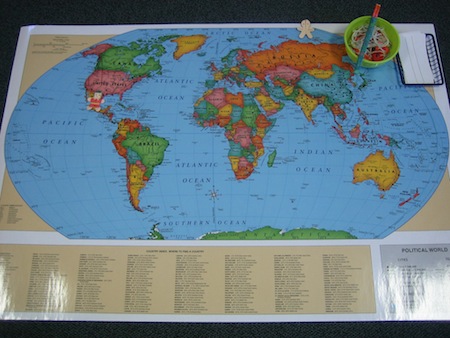 As we began our literary journey through books that represented global ideas, we fastened our seatbelts and spent a day or two just examining the map and what we saw, already knew, thought, had traveled to, had relatives from and any other connections that five year olds had about why the map was there and what we would be doing with it. While I had a firm grasp on their curiosity, I sat everyone down and read How Big is The World? by Britta Teckentrup (2007). The book follows a mole on his adventure to find out just how big the world is. The animals he encounters answer his question in beautiful similes that illustrate the great depth of the world.

After I had read the book to them, we had a lengthy discussion in which I posed the question that mole had asked throughout the book, “Just how big is the world?” They responded with answers such as “50,000 feet”, “one to infinity”, and “humongous.” However, I think that they really started to understand the idea of the book by the end of our discussion when I had asked “Why does the whale say he has never seen the end?” and a student responded “because the world gets bigger and bigger each time we see something new.” This became our theme for the rest of the year as we journeyed through global literature.