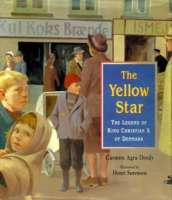 Icons represent ideas. When adults see the iconic “yellow star” sewn onto a piece of cloth, they often automatically think of a dark period in history called Ha Shoah, or the Holocaust. As the Nazis gained power during World War II and Hitler attempted to fulfill his dream of an Aryan world by eliminating those he felt were unworthy (Jews, homosexuals, gypsies, and the mentally ill to name a few), yellow stars were used as a way to mark people of Jewish descent.

The award-winning book, The Yellow Star: The Legend of King Christian X of Denmark, is an example of a story about World War II that may very likely provide needed information about the time period for young students who are just learning about the Holocaust. I was a teenager when I heard the story of Anne Frank, my first story about the Holocaust. I remember asking my mother why people who were not Jewish did not stop the Nazis from doing horrible things to people. My Christian mother explained that they did try to prevent the atrocities. “Christians were hiding the Frank family in the attic.” Today I wonder if the guilt of Christians has produced the influx of mythical stories of how Christians saved Jews during World War II by hiding them. I question this representation of the Holocaust.

Written by Cuban-American storyteller, Carmen Agra Deedy, The Yellow Star is based on a legend about King Christian of Denmark who invited every Dane to wear the yellow star so it would be impossible to discriminate between Jews and non-Jews in Copenhagen when the Nazis begin their occupation in 1940. While the story of the yellow star and how it was used to represent Jews during WWII may provide needed background knowledge for children who do not know what the yellow Jewish star signified, this story is legend often (mis)represented as historical truth – especially by Christians. As a teacher educator, it raises all sorts of questions about how teachers make decisions about quality literature in their classrooms.

The Yellow Star has won at least 22 different awards. For many parents and teachers purchasing books for children, awards mean a book is worth buying and reading. In my research, I read a number of books about World War II and the Holocaust with a group of elementary teachers and Jewish mothers. I wanted to see how they made decisions about choosing literature for elementary children about such a sensitive time in history. While the teachers felt this book was “soft” enough for young children, the Jewish mothers who read The Yellow Star were disappointed in the too often told “glorification of ‘Christians as Saviors’ story,” the representation of myth as truth, and the relative silence of Jewish voices in the text. In one mother’s words, “Too often, Jews are seen as victims, the poor Jews being saved by the Christians again. The Jews don’t even speak in this book.”

This critique is an apt representation of The Yellow Star. The story begins with a unifying view of Danes living in Nazi-occupied Denmark. Deedy uses short sentences to describe Danes as “different from each other” and yet “all loyal subjects of their beloved King Christian” (p. 2). This king was so loved that he was able to ride alone in the streets of Copenhagen every morning, and everyone knew that “Danes would all stand together in defense” (p. 4) of the wise king. Deedy uses celestial metaphors throughout the story. War spread across Europe “like a fierce storm” and Nazi soldiers “gathered like dark clouds” at the border. According to Deedy, “The Danes watched and waited to see what their king would do.” After King Christian resisted the threatening Nazi who demanded that the swastika be flown over the palace, Jews were ordered to sew a yellow star onto their clothing so it would be visible at all times. Retrospective images of King Christian in deep thought finally show him looking into the sky at the stars for answers. “If you wished to hide a star…you would hide it among its sisters.”

The author’s note at the end of this book speaks to the disappointment Deedy felt when she learned this story was a legend or myth. As Deedy points out, Denmark was the only Nazi-occupied country that rescued a majority of its Jews, but “no Jews within Denmark were actually forced to wear the yellow star.” She also asks “what if?” In this question, Deedy urges readers to think about what would have happened if the people of the world had stood up the injustices of the Holocaust rather than simply hiding them. That is the story that must be told, not another myth that ranks a religious denomination as saviors.

Jews resisted the Nazis during World War II but finding heroic novels of Jewish resistance can be a difficult task. Allegorical picture books like Terrible Things: An Allegory about the Holocaust (1989) by Eve Bunting and The Little Boy Star: An Allegory of the Holocaust (2006) by Rachel Hausfater allow children to think not only about how people treated one another during the Holocaust but about how people treat one another in the present day. And, Karen Hesse’s The Cats in Krasinski Square (2004) is an example of a picture book that describes the bravery and resourcefulness of Jews resisting the Nazis. Based on the experience of Adina Blady Szwalger, this book tells of a young Jewish girl living in Warsaw who helps Jewish resistance fighters confuse the Gestapo in order to get food to Jews living inside the ghetto. Jews have made many contributions to society and these stories deserve to be told.

WOW Review, Volume III, Issue 2 by World of Words is licensed under a Creative Commons Attribution-NonCommercial-ShareAlike 4.0 International License. Based on work at https://wowlit.org/on-line-publications/review/iii-2/