By Valerie Muñoz and Julia López-Robertson

While considering what to write in the blog this month, it is difficult not to make connections to our current political situation, namely issues surrounding immigration. Almost a year ago, a colleague contacted me with excitement over a piece of writing that a preservice teacher in her writing methods class had crafted during a writer’s workshop. Los Hormigueros, the piece written by Valerie Muñoz, a graduating senior at the University of South Carolina, takes us into her life as she examines childhood memories based on true events. This story recounts the memories Valerie had as a young girl — a memory of when she became aware that she is an immigrant. We invite you to read Valerie’s story. 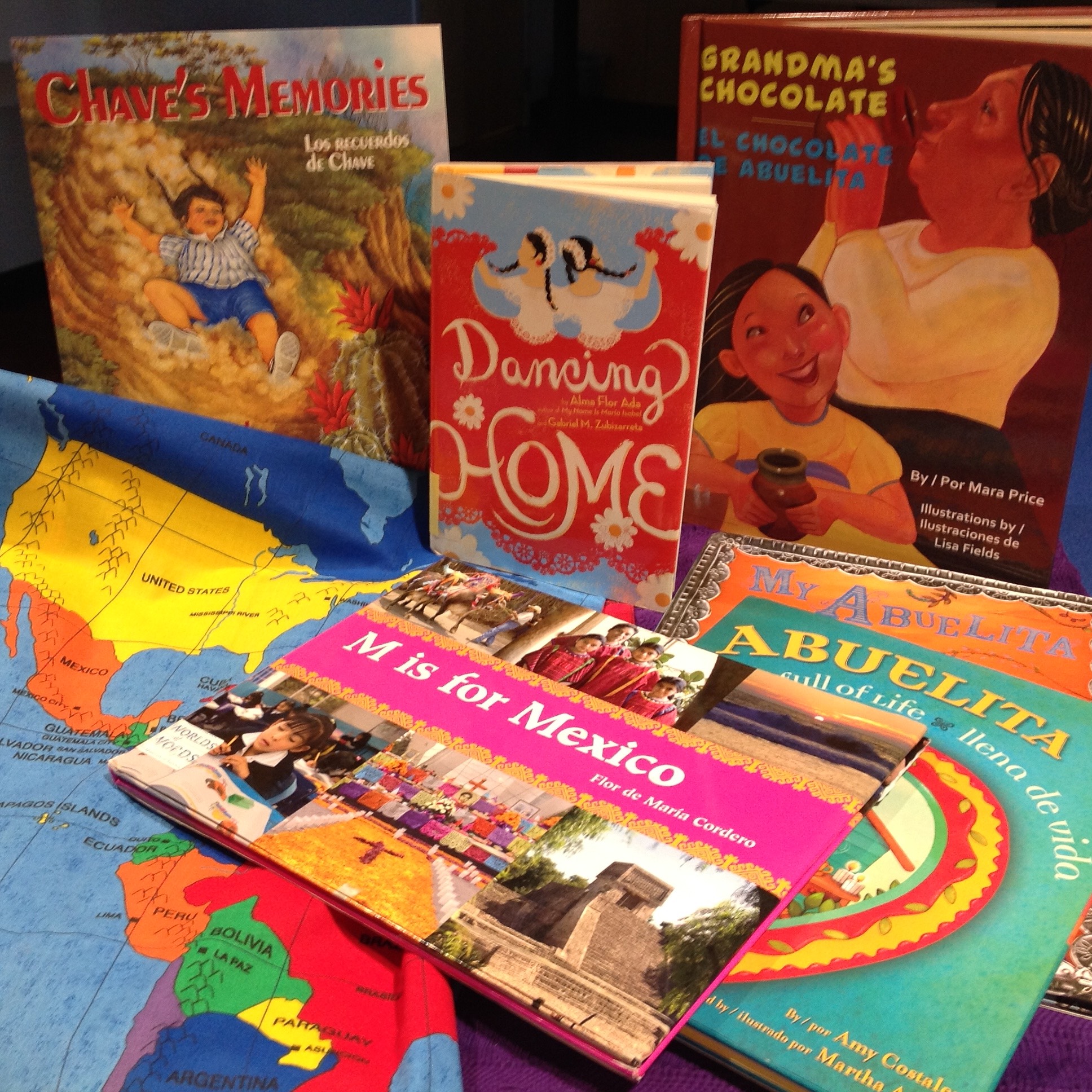 “How much longer?” I asked.

“One more hour,” my mother replied.

“That’s what you said last time,” but my mother just smiled at me while rolling her eyes. She gave me a quick kiss on the forehead.

We were inside an old beaten down bus. There were so many things to look at. A lady in front of us carried two big bags of old looking and smelly clothes. Maybe it was the chickens that smelled. Four big crates were stacked in the back, each containing six chickens. I counted. They wouldn’t be quiet. Many others were there too. The bus ride had started full, but slowly we began to be less until it was only my mother and me.

I asked again when we would be there but she replied with, “soon.” So, I looked out the window. Dirt roads. Plain dry fields that ran forever it seemed. Even the big trees seemed dried out. Occasionally, a house would pop up. They all looked the same with their clothes hanging outside, frail looking horses tied to their wooden gates, and dogs running back and forth. “They’re protecting the houses,” mother said.

More dirt roads. The houses seemed covered in it. We passed two boys on their horses, and the bus cloaked them in a heavy layer of dirt. They didn’t seem mad at all. In fact, they smiled and waved at the bus driver.

All of a sudden, a sign up ahead read Los Hormigueros. My mother’s face seemed to brighten. The bus stopped. The bus driver, an old skeleton looking man, helped us unload our bags.

“Welcome back, Silvita!” he said while smiling at her. He didn’t have any teeth.

“Gracias, Don Miguel,” my mother replied giving him a hug.

The bus drove away cloaking us with a new layer of dirt. I looked at my mother. She stood staring at the pinkish and grayish house in front of us. “When I was your age, I used to live here. This is home,” she told me as her eyes watered. Her big brown eyes sparkled under the burning sun and the dry air.

We started walking towards the house. It had a big front yard. There was even a small garden. Old cars were parked under a great big tree. At least there was some shade.

A group of women ran out of the house. One was blonde, another was brunette, the other redheaded, and then there was an older lady who barely had any hair. But they all looked similar to my mother. “Silvita!” they cried out. Hugs and kisses were exchanged. Giggles, laughter and a combination of crying.

“Say hello to your tías and abuela,” My mother told me. I clung to her leg. They all pinched my cheeks. I didn’t like it so I frowned. They laughed and said, “She looks like a porcelain doll, the only thing she needs is to smile.”

“Oh, I’ll find her smile soon,” a soft but masculine voice said. An old man stood with his walking stick smiling at my mother and me. My mother ran to him and gently hugged him. Tears ran down his face. He looked just like my mother.

He sat down in a torn chair and beckoned me to him. I slowly walked over. “How do you know I will smile, Abuelo?” I asked softly.

“Oh, because I can make all the ladies in my life smile,” he replied looking around while my tías, my abuela and my mother giggled, “I’ll find yours soon enough.”

So then it began.

“Come I will present you to your cousins,” Abuelo said and then he called out, “Grandchildren!” Right then children of all ages began to appear. Tall and short. Dark and light. But all with a layer of dirt. Amongst them I spotted my two older brothers whom had come with father the day before.

Too many people. I did not like this so I frowned. Mother had gone inside so I stood close to Abuelo. Abuelo stared at me with a questioning face. “I’ll find your smile soon,” is all he said as we walked inside.

Abuelo showed me around the house. It wasn’t big. It only had three rooms but there were bunk beds everywhere. Even in the living room. Abuelo pointed to a picture of a baby hanging on the wall. “That’s your mother.” The picture looked like it had been drawn out. It was black and white. I asked my abuelo if I could see more pictures of her. With a sad face he said that was the only picture they had. So, I frowned.

Later that day Abuelo decided we would all go walking. He was going to show us our land. Abuelo saddled onto his horse. The family followed by foot. We walked for hours it seemed. While my cousins ran ahead playing with sticks and rocks, I stayed by my mother. My legs grew tired. So, I frowned. Father raised me high and sat me on the horse next to Abuelo. But I did not smile. “Hmm… I’ll find your smile soon,” is all Abuelo said.

That night I stared amazed as my grandparents pushed their bed outside. They laid down in the middle while my cousins hopped on. The rest of the family grabbed a chair and sat next to the bed. As a family, we all gazed at the brilliant stars of the cool night sky. “Do you like the stars?” Abuelo asked. I nodded a yes. “Then why are you frowning?”

In the morning Abuelo said that he knew just the thing which would make me smile. All the children were sent to milk the goats. Abuelo said we needed to fill the giant pot. The goats were bigger than most of us. So, while two held the goat steady, the other two milked. When we finished, he took the giant pot to my abuela who sat in a chair next to a small fire. In one hand, she held a big wooden spoon.

I asked what was she making but Abuelo just smiled and said “You’ll know soon enough”.

Then Abuelo said we didn’t have any more chores for the day so we could go play. “But do not disturb your Abuela,” he called out.

It was another hot day. My cousins turned on the water faucet next to the garden and began spraying water on all of us. I moved away. The dry dirt turned into cool mud. But I did not like mud.

So, I stared at Abuela who sat under the sun. Her thin arms moved the wooden spoon in a slow circular motion. Tempted, the boys slowly crept next to her. But as soon as they tried looking inside the pot, Abuela pulled out a twig and spanked them away. “Its bad luck, you’ll ruin it,” she cried.

So, we waited patiently all day.

The sun was setting when Abuelo called the family outside. We all gathered around the pot. Everyone seemed excited. I wasn’t tall enough to see inside so I frowned. Abuela then dipped the wooden spoon inside and passed it to my mother. It was brown. A shiny creamy looking brown. My mother gave abuela a big smile as she finished eating her spoonful.

Abuela passed around the wooden spoon to everyone. At the moment it touched their lips, they were all smiling. And then the spoon was passed to me. My mother sat me down on her lap and beckoned me try it. So, I did.

My eyes widened. The brown spread sent wonders to my mouth. It was creamy and smooth. It tasted like caramel but better. Much better. A great big smile spread across my face.

“There it is. I knew she had to have the family sweet tooth,” Abuelo said while everyone giggled.

That night, what had taken hours for Abuela to make, the sweetened milk disappeared. But with our bellies full, all were happy and not one frown could be found in Los Hormigueros.