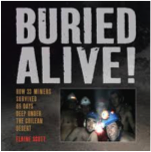 Buried Alive!: How 33 Miners Survived 69 Days Deep Under the Chilean Desert. Scott, Elaine. Clarion, 2012. ISBN: 9780547707785.
In August 2010, thirty-three miners were buried alive, two thousand feet below the surface of the earth. After seventeen tense days, just as hope was nearly gone, rescuers made contact with the men. All thirty-three men were alive! But it would be weeks before they emerged from the mine. Chile.

The Composition. Skarmeta, Antonio and Ruano, Alfonso. Groundwood, 2000. ISBN: 9780888993908.
Pedro and Daniel are two typical nine-year-old boys living in a village in Chile. Until Daniel’s father gets arrested, their biggest worry is how to improve their soccer skills. Now, they are thrust into a situation where they must grapple with a military dictatorship and uncertainty. 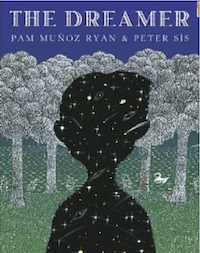 The Dreamer. Ryan, Pam Munoz. Sis, Peter, Ill. Scholastic, 2012. ISBN: 9780439269988.
From the time he is a young boy, Neftali hears the call of a mysterious voice. He knows he must follow it–even when the neighborhood children taunt him, and when his harsh, authoritarian father ridicules him, and when he doubts himself. The voice leads him many places until he finds his calling as the famous Chilean poet, Pablo Neruda. Fictional biography. Chile.

I Can Read & Speak Spanish. Hazan, Maurice. McGraw-Hill, 2005. ISBN: 97800714400431.
Children are introduced to 60 new words that are used in simple illustrated stories. Learning activities at the end of each story encourage children to re-create the sentences and create new sentences of their own.

I Lived on Butterfly Hill. Agosin, Marjorie. Atheneum, 2014. ISBN: 9781416953449.
An eleven-year-old’s world is upended by political turmoil in this searing historical novel based on true events in Chile. Celeste lives peacefully among friends and neighbors and family in the idyllic town of Valparaiso, Chile until she can no longer deny the political unrest that is sweeping through the country. Warships are spotted in the harbor and schoolmates disappear from class without a word. Chile.

In the Land of the Jaguar: South America and Its People. Gorrell, Gena K. Krystoforski, Andrej, Ill. Tundra Books, 2007. ISBN: 9780887767562.
South America’s story is as varied as its geography of soaring mountains, scorching deserts, and lush rainforests. The text combines an often-tragic history with the problems and triumphs of the present, presenting a great deal of information about plant and animal life across the various countries of South America.

The Inca Empire. Newman, Sandra. Scholastic, 2010. ISBN: 9780531241097.
Provides facts about the ancient Inca Empire, including how the Inca survived in the mountains and built their empire. The book examines the lost city of Machu Picchu, what happened to the Inca Empire, and the mystery of its existence. 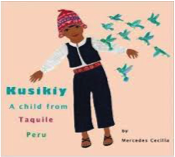 Kusikiy: A Child from Taquile, Peru. Cecilia, Mercedes. Keepers of Wisdom and Peace Books, 2012. ISBN: 9780984407989.
An original myth focuses on the world of an Indigenous Peruvian child. Kusikiy lives in the Andes Mountains in a small island in Lake Titikaka. In his community, Kusikiy’s father cultivates potatoes and Quinoa; his mother, like her mother and grandmother, weaves traditional designs into her textiles recording the important events. Peru.

La oruga muy hambrienta. Carle, Eric. Philomel Books, 2002. ISBN: 9780590431057.
The Spanish translation of The Very Hungry Caterpillar preserves the original simplicity and the appealing use of repetition and rhythm. The exquisite collage illustrations will delight children as a hungry caterpillar happily eats his way through pages of fabulous food and emerges a brilliantly colored butterfly.

Lost City: The Discovery of Machu Picchu. Lewin, Ted. Philomel, 2003. ISBN: 9780399233029.
In 1911, Hiram Bingham carved a treacherous path through snake-filled jungles and across perilous mountains in search of Vilca Pampa, the lost city of the Incas. Guided the last steps by a young Quechua boy, Bingham discovered not the rumored lost city, but the ruins of Machu Picchu, a city totally unknown to the outside world. Peru.

Love and Roast Chicken: A Trickster Tale From the Andes Mountains. Knutson, Barbara. Carolrhoda Books, 2004. ISBN: 9781575056579.
One day, high in the Andes Mountains, Cuy the Guinea Pig is searching for wild spinach to eat when Tío Antonio the Fox comes in search of Cuy to eat! Tío Antonio thinks he’s found dinner, but crafty Cuy has other plans. Quick-witted Cuy fools Tío Antonio not once, but three times! Peru.

Martin de Porres: The Rose in the Desert. Schmidt, Gary D. Diaz, David, Ill. Clarion, 2012. ISBN: 9780547612188.
As the illegitimate son of a Spanish nobleman and a former slave, Martin de Porres was born into extreme poverty in Peru. His mother begged the church fathers to allow him into the priesthood. Instead, Martin was accepted as a servant boy. But soon, the young man was performing miracles. Peru

Mia’s Story. Foreman, Michael. Walker, 2006. ISBN: 9781844282784.
One day Mia’s father brings her a puppy, which she calls Poco because he’s so small. When Poco runs away, Mia travels far up into the mountains to search for him and finds White Mountain flowers, growing under the stars. Planting them in her village, the flowers bloom and spread all over the dumps. Chile. 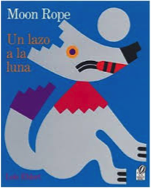 Moon Rope/Un lazo a la luna. Ehlert, Lois. Houghton Mifflin 2003. ISBN: 9780152017026.
In this Peruvian folktale, Fox wants to go to the moon. Mole does not – at least not until he hears about the huge worms waiting up there for him to eat. So the two of them set off on their adventure, with a little help from a rope of grass and their friends the birds. Peru. 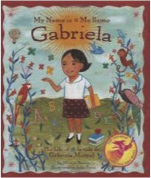 My Name is Gabriela/Me llamo Gabriela: The Life of Gabriela Mistral/la vida de Gabriela Mistral. Brown, Monica. Parra, John, Ill. Cooper Square, 2005 ISBN: 9780873588591.
Gabriela Mistral loved words and sounds and stories. Born in Chile, she would grow to become the first Latina woman to win a Nobel Prize. As a poet and a teacher, she inspired children across many countries to let their voices be heard. Chile.

National Geographic Countries of the World: Peru. Croy, Anita. National Geographic Children’s Books, 2009. ISBN: 9781426305702.
Includes a description of the diverse landscape of Peru and the plants and animals that flourish in the ecologically diverse regions of the country. Also describes the history of Peru, including the Inca Empire, the Spanish invasion, and centuries of colonization. Peru.

Pablo Neruda: Poet of the People. Brown, Monica. Paschkis, Julie, Ill. Holt, 2011. ISBN: 9780805091984.
Once there was a little boy named Neftalí who loved wild things wildly and quiet things quietly. From the moment he could talk, he surrounded himself with words. Neftalí discovered the magic between the pages of books, and when he was sixteen, he began publishing his poems as Pablo Neruda. Chile.

The Ugly One. Ellis, Leanne Statland. Houghton Mifflin, 2015. ISBN: 9780544439177.
Twelve-year-old Micay walks around her fifteenth-century Incan village shielding the scarred side of her face that inspired the cruel name Millay, or “Ugly One.” She escapes to her huaca rock, avoiding the villagers who shun her. Her world shifts dramatically when a stranger gives her a baby macaw. Historical fiction. Peru.