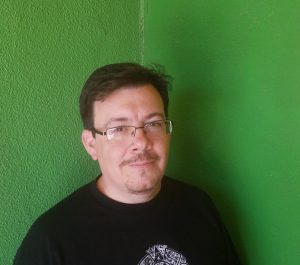 David Bowles is a two-time Pura Belpré Award winner and professor at the University of Texas Río Grande Valley. In his latest novel, They Call Me Güero: A Border Kid’s Poems, David uncovers the realities of life in a border city. I was immediately drawn to this story in compiled poems as I also grew up in a border city. Though I am not Mexican-American, I watched some of my friends from childhood who are struggle to find their identity, as Güero does. I appreciated the opportunity to read about growing up in a border city, as these stories are not often shared.

David wants to share what it is like growing up in a border city through Güero’s story. After reading the novel and gaining deeper understandings of David’s experiences, I contacted him with an interview request to hear about his inspirations for They Call Me Güero and the importance of the message within. He generously shared his reaction to winning the Pura Belpré award, influences on his writing and keys to a successful school visit.

The Pura Belpré Award is presented to a Latinx writer and illustrator whose work best portrays, affirms and celebrates the Latinx cultural experience in a work of literature for youth. David, a Mexican-American author and educator who grew up and lives in Rio Grande Valley of South Texas, won this award for They Call Me Güero. David compares winning this award to winning an Oscar. “It’s a life-altering award, frankly,” says David, “This is the second time I received the Author Honor.” He previously received it for The Smoking Mirror, and winning it completely transformed his career.

Being recognized for writing one of the best books for Latinx kids created an immediate air of respectability. It also helped boost the books sales, which means more Latinx kids are reading something that is specifically crafted for them. Having his work reach this larger audience is important to David, because he wants to share what it’s like to live as a Mexican-American in a border city.

They Call Me Güero: A Border Kid’s Poems

Güero is a 12-year-old, Mexican-American boy sharing his experiences living in a border city. As 7th grade begins, Güero learns about his parents struggles and seeks his voice. He is a huge nerd who has a group of friends, Los Bobbys, who share his interests, passions and newfound curiosity in girls. In school, he meets an English teacher who helps him find his voice through poetry. Güero shares his journey through a set of 51 poems in this novel.

Living in a Border City

Not everybody has the opportunity to grow up experiencing two cultures. Living in a border city allows people to participate in a variety of traditions from both sides of the border. Shared food, community events and language borrowing bring border kids together. I had the opportunity to grow up in the border city of El Paso, Texas, and got to experience the Mexican-American culture first-hand. My school celebrated holidays for both cultures and taught us the meaning behind each holiday, such as Dia De Los Muertos.

Similarly, David highlights the vibrant culture and happy people. “I definitely wanted to remind border kids and show the rest of the world that the border isn’t some post-apocalyptic wasteland full of lawlessness and despair,” he says. He feels that the best way to share this culture and experience is through the eyes of a 7th grader.

David often draws inspiration from real life. For example, Güero’s character is inspired in part from his son, a gen-z boy. Having a child a part of that generation helped him incorporate common cultural/mainstream items such as snapchat, K-pop, hip-hop, comic book heroes and hybrid cars. David says it is unrealistic to write a character who lives in 2019 and doesn’t know about or enjoy these things. He blended in Güero’s cultural heritage to create a “rounded Chicano kid who breaks all the stereotypes.” Güero’s story begins as a single poem, “Border Kid,” and grows into another 50 poems to create the book.

David credits part of the creation of Güero’s story to the book’s editor, Bobby Byrd. Bobby works at Cinco Puntos Press and reached out to David after reading the first poem. He helped David structure the novel-in-poems and helped with the balance of emotional and physical details. “Manos a la obra,” David says.

School visits are an important component for sharing the message behind a book. They allow for authors to discuss why a book is written and what they hope to convey. Plus, interacting with the author is always exciting! David says that being interesting and funny is key because he tries to have readers believe that reading his book is worth their time. He discusses how the lives of his characters may be similar to the students’ lives and how important it is to share their own stories. “To see themselves as readers, kids need to see their lives as worth of being depicted in literature,” David says. He wants his characters and stories to reflect the audience, which will help with their interest in the story.

David offers various workshops for adults, teens and children. Each workshop is structured uniquely, but their main focus is to help the audience grow as readers and potential writers. Learning to engage with a story helps people free their minds and hearts through the words on the page. Discussing his book has been going well in classrooms, and he has received many messages about the impact it makes on students and teachers.

“Finding work that centers kids, that is culturally diverse, is important,” David says to teachers. “They Call Me Güero is a great fit. Furthermore, the book explores Mexican American identity on the border in a way that shatters stereotypes.”

David is currently on a book tour and will be working on a discussion guide once he returns home. He plans on including a variety of things including analysis of the different poetry forms uses and exercises that use the poems as templates for students to create their own work. Having his book shared is what he considered to be the highest form of praise, and once the discussion guide is ready I’m sure he’ll be excited to share that with schools.

I look forward to see where he goes from here and hope to read more border kids’ poems one day!

You can find additional information about They Call Me Güero and David’s other work on his website.