LeUyen Pham prides herself on providing multicultural representation in her books whenever possible or, as she has stated, to make sure children do “not feel excluded.” She, more than most, can firsthand relate to more than one culture and believes children should see themselves in books. LeUyen was born in Saigon, Vietnam, in 1973. She and her family were several of the last refugees on the roof of the United States (US) Embassy rescued by helicopter during the fall of Saigon in 1975. She was only 2 years old at the time Saigon fell and her family escaped. Her family made their way to the United States via several stops along the way with the help of a sponsor and settled in Temple City, California, a suburb of Los Angeles. Besides both her Vietnamese and American culture, she also has strong French connections. The most immediate connection being her mother who is half Vietnamese half French. Her husband is French graphic artist Alexandre Puvilland and her two children with Puvilland attend a French School in Los Angeles. Another French connection comes from her own Vietnamese heritage; Vietnam was occupied by the French from the late 1800s until the mid-1950s, leaving its cultural marks throughout the larger Vietnamese culture and most likely LeUyen’s parents lives. Hence, LeUyen is not only part of multiple cultures but also is also part of a culture that she did not see represented in children’s literature while growing.

In multiple interviews LeUyen states that she does not remember a time when she was not creating or drawing. As the second youngest of five children, LeUyen remembers sitting by her mother while her mother was on the phone, scribbling on anything she could get her hands on, including the phone book. LeUyen’s scribbling came in handy when she entered school art contests vying for the winning prize of two dollars. Plans for the two-dollar prize included purchasing her own books. From childhood LeUyen spent time reading; weekly trips to the library could last upwards of three to four hours because LeUyen loved reading.

Ultimately LeUyen’s artistic pursuits led her to attend ArtCenter College of Design in Pasadena, California where she earned a bachelor’s degree. Upon graduation, LeUyen was employed at DreamWorks, where she first met her husband, Alexandre Puvilland, although they did not become involved until years later. While the pay at DreamWorks was good, she quickly realized that this was not her dream occupation. The money was so good, she feared it would keep her at DreamWorks instead of pursuing being a children’s author unless she left. LeUyen set a plan to leave DreamWorks, but first used her salary to pay off her school loans and save what she could for when she planned to free-lance. During LeUyen’s second year at DreamWorks, she received her first illustration contract. She spent a couple of years working for DreamWorks during the day and her evenings illustrating for children’s books. LeUyen states she was told that no one could make a living as a children’s book illustrator as a full-time endeavor. Despite this advice, LeUyen left her job at DreamWorks to pursue a career as a children’s author and illustrator.

At the beginning of her career, LeUyen was given the advice to singularly hone her style so that she became known for that singular style. LeUyen did the opposite of that advice and has excelled at multiple styles. LeUyen stated during her Worlds of Words webinar that she “did not want to make the same type of book over and over again.” She wanted to make herself very versatile and three years after she left her job her career really took off and she is never bored. LeUyen has been more than just versatile in her style, she has mastered and shines at each. The downside of working with a variety of styles (and frequently new styles) is how draining it is on her. LeUyen states that changing styles is tantamount to “redefining yourself” anew each time she changes styles. Coming to the realization that despite the variety of styles she has used, the elements of design stayed the same. This understanding gave LeUyen the freedom to experiment with different media to produce the look she desired as long as she remembered the elements of design. A more philosophical revelation LeUyen came to understand about herself as an artist is that she had “to evolve to stay alive and interested as an artist.” Going against the grain has served LeUyen well throughout her career.

LeUyen’s normal process for creating a book whether as the author, the illustrator, or both is different from many of her contemporaries. She often produces three to four books a year though it is a common practice in the industry for an author to take an entire year to produce one book. 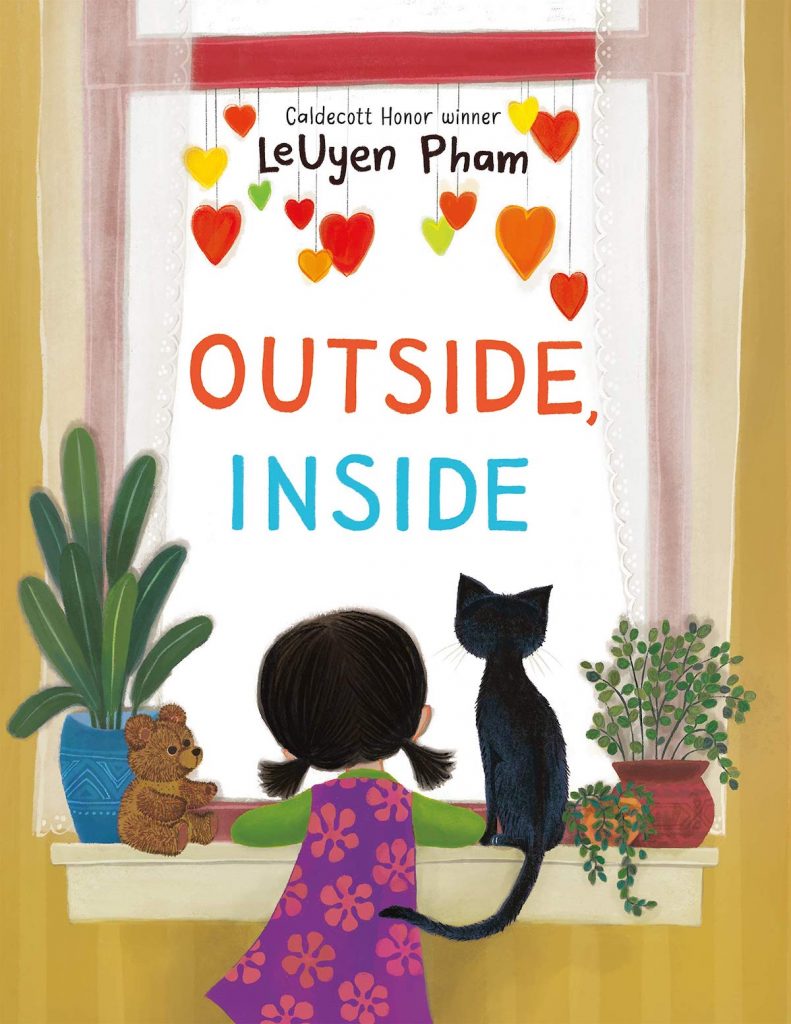 Leuyen’s process in creating her newest book, Outside, Inside, released in January 2021, was a much different process than her normal. First, Outside, Inside was both written and illustrated by LeUyen in only six weeks. While LeUyen’s normal process to create a book takes several months, which is considered fast in the industry, six weeks is unheard of.

Secondly, LeUyen stated that during the process of making this book she did not sleep because she was so overwhelmed with emotion. LeUyen felt all the same range of emotions that many of us around the world felt since the pandemic began. Mental health has been a universal concern over the past year as people feel disconnected from other humans.

This book’s realization came about because of the way LeUyen dealt with her emotions during the pandemic. LeUyen watched the news covering frontline workers who witnessed what damage this virus can do firsthand. LeUyen stated that the news “overwhelmed the left side of her brain and the only way she could cope with it was to begin sketching everything.” Her sketches represent real individuals she saw from all over the world and she wanted the story to show what others from around the world experienced. Too often people forget that others may be having a different experience themselves and she wanted the world’s experience to be shown. She is also cognizant of representation in children’s literature and wanted children around the world to see themselves in her books.

Outside, Inside is a unique book for LeUyen in a couple of ways. First, a concern of LeUyen’s in the creation of this book is to advocate for wearing a mask without taking a political stand. In her webinar for Worlds of Words and UArizona’s College of Education’s Children’s Literature classes on February 2, 2021, she stated that, “she did not want this book to be politicalize – without having to say it… but (wanted to show) a reason to wear a mask.” She did not want her book to be controversial by making solely a political statement but did want to support mask wearing. Secondly, this book unlike any other is a type of time capsule for the pandemic in picture book form written during the pandemic. While books may come after the pandemic is over, not many have come out during the pandemic to present a worldview in the present. Lastly, LeUyen wanted for those who read the book in the United States to “see what the rest of the world is going through.” Each of these considerations delivered a unique experience for LeUyen that readers benefit from.

LeUyen’s books often find their way into classrooms and connect with students. LeUyen believes that “books are some of the first places students connect within the classroom.” I have used several of LeUyen’s books in courses I instruct. In the Developmental Reading course I teach, I use the book Bear Came Along to demonstrate a whole class writing activity. I read about the idea on teachingbooks.net and thought I would try the lesson. I continually model in class ways preservice teachers can use trade books to teach across the curriculum and as a foundation to teach developmental reading skills, behaviors, or knowledge.

I modeled the engagement as if I was the grade schoolteacher and conducted a read-aloud of the story first. After a grand conversation about the theme of unity, students brainstormed places in the community where people come together. Based on student answers, I create a list of community places. Again, a discussion follows the listing activity so that students can describe how each place listed specifically brings people together. Next, students free write for ten minutes about a space in their community that acts as a place that unifies the community. I stop the activity for the preservice teachers at this point, but explain to them that when they are teachers in the classroom, they can use the students free writing to then extend the lesson by completing the rest of the writing process over several days. Students would revise their free writing into a more formal writing assignment that included editing and publishing their work. Another writing assignment could be to have students compare the unifying community place they selected with characteristics that unifies them at school.

Authors’ Corner is a periodic profile featured on our blog where authors discuss their writing process and the importance of school visits. Worlds of Words frequently hosts these authors for events in the collection. To find out when we are hosting an author, check out our events page.