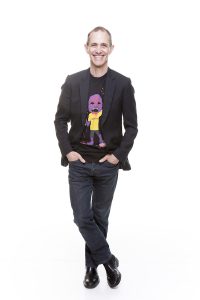 Join us to laugh along with international superstar, Andy Griffiths, all the way from Australia. Andy is the bestselling author of the Treehouse chapter book series and will tell about his newest book, The Treehouse Joke Book, and his upcoming 10th book in the series, The 130-Story Treehouse. The Treehouse Joke Book is chock-full of gags, quips, puns and cartoons. The Treehouse books by Andy Griffiths and Terry Denton are chapter books filled with black-and-white drawings and packed with jokes, nonstop action and exuberant storytelling. Hang out in their 130-Story Treehouse, that has a soap bubble blaster, a time-wasting level, the GRABINATOR (can grab anything from anywhere at any time), a toilet paper factory and an extraterrestrial observation center. This webinar will include time for a Q&A and an activity.

Imagination Fridays participants can order signed copies of the books featured at https://shop.uabookstore.arizona.edu/main/wildcats/TFOB/Children.

Andy Griffiths is the best-selling author of the Treehouse series, Killer Koalas from Outer Space, The Big Fat Cow That Goes Kapow and The Cat on the Mat is Flat. Andy lives in Melbourne, Australia and works with cartoonist Terry Denton. Andy and Terry’s books have sold over 10 million copies in Australia and won many awards, including Book of the Year. The Treehouse series has been embraced by children around the world and is now published in more than 35 countries. Five of the books have been adapted for the stage in the Netherlands, Australia, New Zealand, and the U.S.

Imagination Friday is co-sponsored by the Tucson Festival of Books and Worlds of Words, University of Arizona College of Education and occurs Fridays from 1 to 1:40 p.m. through December 2020 with a different author or illustrator each week. Add some excitement to Fridays with world-renowned children’s authors and illustrator to promote new books and encourage children as readers, writers and illustrators.