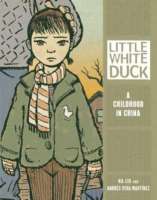 No story is more authentic than an author’s own personal experience such as the one conveyed in this graphic novel. Na Liu, the author, shares her childhood experiences in mainland China in the 1970’s through eight short stories featuring a young protagonist named Da Quin. One story presents the story of when the family welcomes a second child into the family, little sister Xiao Quin. Another story addresses what Da Liu learns about her own privileged lifestyle when she visits her father’s hometown. Through Da Quin’s stories, readers get a real sense of China during the 1970s.

Andrés Vera Martinez, the illustrator of Little White Duck, illustrated his wife’s Na Liu’s memoir in a sequential art form. Even though Andrés’ illustrations give readers ample information on China back in the 1970’s, some readers may not have sufficient background knowledge of China, and thus find it difficult to understand some episodes in the text and will need to do further research. For example, readers may not know about the Chinese leader, Chairman Mao Zedong, who founded the People’s Republic of China, and so have difficulty understanding the reason why people in China were deeply saddened when Mao died. Children in the United States in the 2010s may also find Da Quin’s childhood quite different from theirs. In fact, some of episodes in Little White Duck may be shocking, such as the episode where Da Quin brings three rat tails to school as evidence of contributing to pest control. Children will also learn that Da Quin would have had no siblings if her sister Xiao Quin had been born a little later because of the one child policy in China. Whether children find some episodes shocking or entertaining, Da Quin’s stories help young readers to see a dynamic period of time in China.

Little White Duck will attract a wide range of readers from elementary students to adult readers. Since the protagonist Da Quin is in elementary school, children in her age group may like to read about her and learn about children’s lives in China in the 1970’s. Older readers with some background knowledge on China may find that this book gives them an insider’s perspective on people’s lives in China in 1970’s. The graphic novel format will also attract readers who appreciate sequential art.

If readers want to compare children’s lives in the 1970’s in different countries, stories like Brown Girl Dreaming (Jacqueline Woodson, 2014) and Inside Out & Back Again (Thanhha Lai, 2013) can be read together with Little White Duck. Pairing with nonfiction books about China will help establish more background information on China in that time period.

Na came to the United States as a medical researcher and Andrés is from Texas. In the author’s note, Na noted that her husband Andrés liked to listen to her childhood stories and told her that she had a unique childhood. Andrés’s authentic illustrations not only teach readers about Chinese culture, but also help them visualize Na Liu’s life. Readers who enjoy Andrés’ beautiful illustrations can find more information on him and his books at on his website.

WOW Review, Volume VIII, Issue 2 by Worlds of Words is licensed under a Creative Commons Attribution-NonCommercial-ShareAlike 4.0 International License. Based on work at https://wowlit.org/on-line-publications/review/viii-2/