Most of the books mentioned in the first week of this series on books about Malala Yousafzai were submitted for book awards and considered distinctly above and beyond the run on the mill books that frame the Malala rhetoric by at least the publishers. Each story has the same narrative with various distinctions and have varied illustration distinctions. Malala story’s attraction is undeniable in all of the texts. Her being shot and surviving gives credence to the story as the girl who lived to use her incident to further her cause. 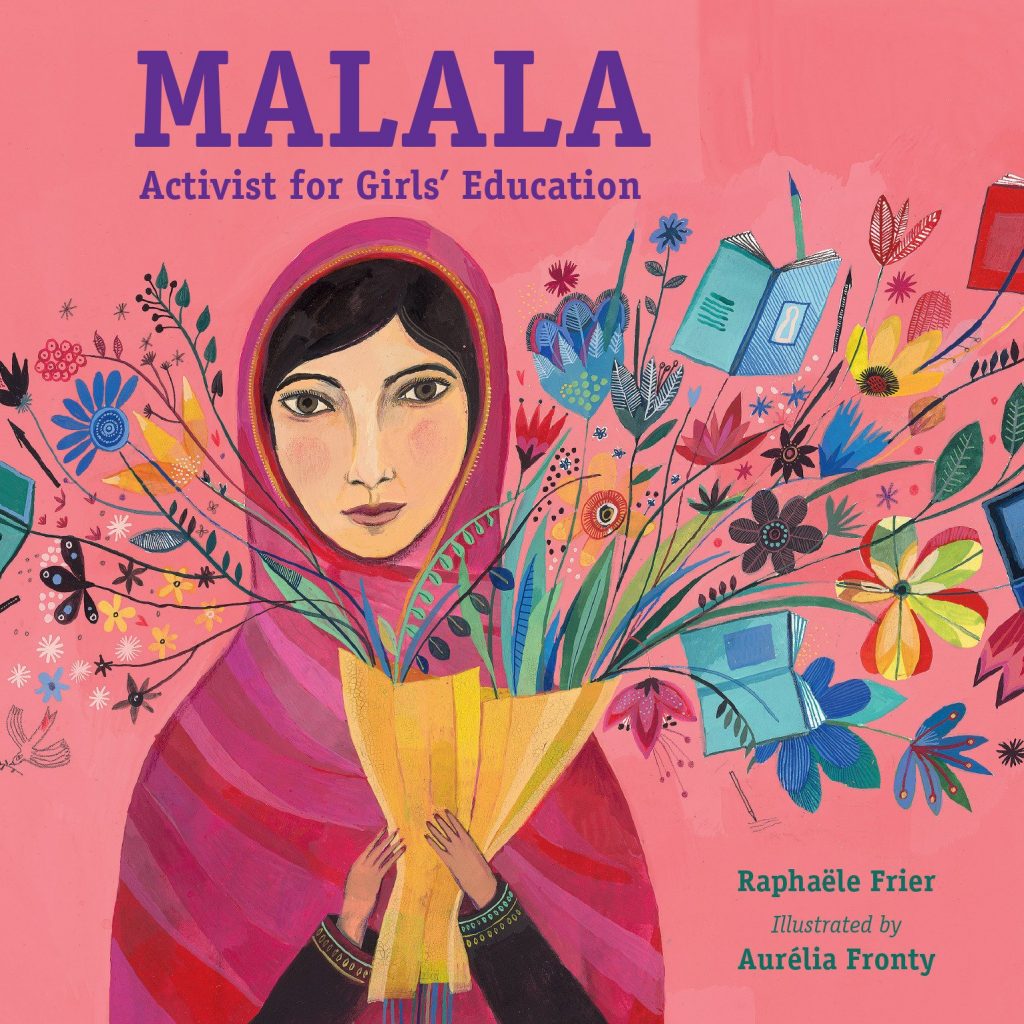 Malala Activist for Girls’ Education by Raphaële Frier, Translated from French to English by Julie Cornier, 2017
The vocal nature of a young bold girl is demonstrated well in this book. The characters of Malala and her father are front and center as is the lack of the mother’s presence in the whole narrative except when the text points out that her mother is uneducated like many in the country. “Most women, like Malala’s mother, cannot read and write” (Frier, 2017). The text is based on Malala’s life pre and post shooting. The shooting scene is described perceptively with the shooters as silhouettes. This book stands out due to its circumstantial capacity.

Beautifully illustrated by Aurelia Fronty and first published in France, this book embodies more details about the events of Malala’s life and her impact as well as the reasoning behind the political movements that brought Taliban into the limelight in northern Pakistan. The back mater is detailed and self-explanatory with pictures of worldwide retaliation to the Malala story as well as historic moments of her life. The beautiful illustrations present Malala as looking like a young woman rather than a child. The written narrative appears emotionless at times given the genre of the book, but the visual narrative takes the written narrative further. The stylized and flat illustrations have brilliant colors that are attractive and draws the audiences into the often-bleak narrative. This book has received multiple awards and strong and positive reviews mentioned here: Christian Library Journal, Kirkus Reviews, Mildred L. Batchelder Honor, Publishers Weekly and Junior Library Guild.

For the Right to Learn: Malala Yousafzai Story by Rebecca Langston-George, 2015
This book is written for Plan International, “Grades 2-4. Each book in the Encounter: Narrative Nonfiction Picture Books series follows the life and work of a notable woman in history, framing her story in a way that young readers can understand” (Booklist 2015). The girl with a voice has a strong presence in this book. Various fonts and placements of illustrations and written texts make this an interesting read. The didactic nature of the text is predominant as it is written for a larger group of text about notable women in history. The visual depiction of Malala is in a cute, cartoonish manner that draws away from the seriousness of the narrative. Again, the father/daughter duo is predominant. The father’s influence is undeniable and strong visually and otherwise. The detailed facts about Malala’s life are presented well here in detail but not as detailed as the previous book. The pivotal shooting scene is reflected in this narrative on a flat recto page with the words; “three shots shattered the silence” and an upturned book with a flat brown cover spattered with drops of blood. Back matter is not as detailed though. “Malala’s own mother didn’t learn to read or write when she was young. But Malala’s father believed girls deserved the same education as boys” (Langston-George, 2015).