In week three, I explore further trends in books about Malala Yousafzai and issues that lie therein. For this post, I discuss Malala A Brave Girl from Pakistan by Jeanette Winter. This Chicago-based American writer has written extensively about international regions and issues, as well as the regions where Muslims reside, within the genres of fiction and nonfiction. Her famed stories include The Librarian of Basra set in Iraq and Nasreen’s Secret School set in Afghanistan. I also discuss Malala Yousafzai: Warrior with Words by Karen Leggett Abouraya, a journalist turned author who is married to an Egyptian and travels widely. 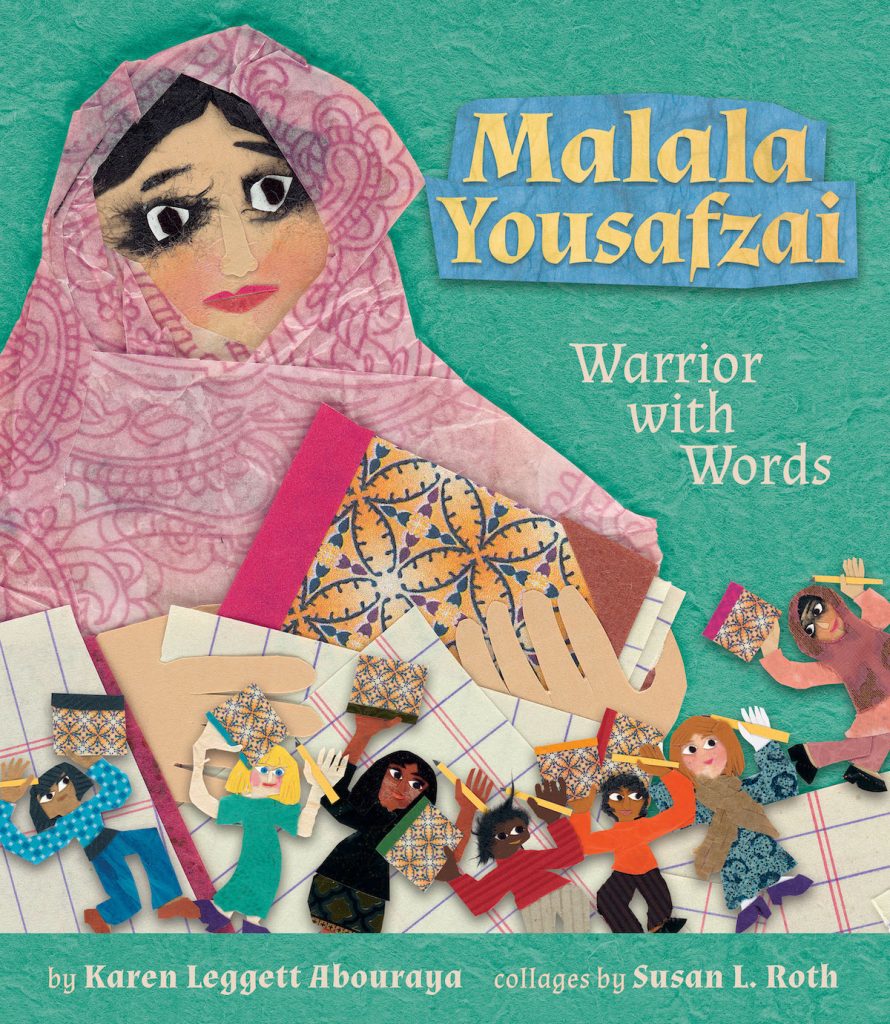 Malala A Brave Girl from Pakistan: Iqbal A Brave Boy from Pakistan by Jeanette Winter
Winter’s book looks at two stories with the same theme: a child shot in Pakistan. She focuses here on a boy, Iqbal, and a girl, Malala, whose stories are joined together by activism and trauma. Iqbal was a young Pakistani child enslaved by the carpet mafia named Iqbal Masih in the 1980s. He was shot in 1995 as he turned into an activist, speaking against the mafia and for oppressed children in his same situation. It is a story written and published previously in France by Francesco D’Adamo and then translated into English to be circulated in the U.S.

Iqbal was a Pakistani Christian and his death was mourned by the masses. The story is narrated in a clear and concise manner considering Iqbal’s life. Iqbal’s displacement from home to a carpet factory tied him to a carpet loom at the age of four. His family owed a small debt to the owners and had little to pay it back with. One should note that not all carpet industries in Pakistan conducted their business in this manner (by enslaving underage children).

Malala’s story begins quite abruptly with the scene where the shooting of the child occurs. Then the Taliban asks, “Who is Malala?” The story then moves into the details of Malala’s life and activities. Malala says, “They are afraid of women. How dare the Taliban take away my basic right to education?” Iqbal declares himself free when he learns that the Pakistani government declared debt enslavement illegal.

This book is beautifully organized with each story individually told at the beginning from both ends of the book so that the emphasis is not on either story. The middle of the narrative has the double spread joining the two children with the twine that is used in flying kites. Kites have been long used as a metaphor for freedom and liberation. Iqbal is shown as a flat grey figure letting go of the twine while Malala seems to hold on to it, her form in in brilliant pink and full of life. The colors are muted and the illustrations flat. They fall easily on the readers mind, even though the subject matter is hard to embrace. Winters’ take absorbs one story in the past with very different story in the present day and age: Iqbal, whose life ended with the fatal shot, unlike that of Malala Yousafzai, the girl who survived after being shot.

Malala Yousafzai: Warrior with Words by Karen Leggett Abouraya and collages by Susan L. Roth
Originally published as an e-book by StarWalk Kids Media, Abouraya’s take on the story is different due to the stunning childlike collage images by Roth. Though the story and the extensive back matter are the same as most of the books being explored here, this book stands apart due to the details in the visual text and the written one as well. The specifics in the written text are significant and more extensive. The images are colorful and have typical traditional designs. Each page has the written text on lined paper that is, again, common in the region of the world. The verso page image about the shooting clearly shows the three girls who were shot, and the recto page has the written text that explains that the three girls had injuries. Malala’s injuries were more life threatening, so she was taken to England while the other two girls were treated in Pakistan.