Author Joseph (Joe) Bruchac, a storyteller most of his life, sat in conversation with children’s literature students at the University of Arizona on January 31, 2022, a session which I attended. Raised by his maternal grandparents who lived down the road from his parents, little “Sonny,” as he was called, did not know much about his Native American roots. Once Bruchac began to explore his Native American heritage in college, he became drawn to his Abenki roots. He says, “I knew as a child, for example, that we had native heritage, but I did not know much about it.” Bruchac was born in October 1942 in upstate New York, and he still lives in Saratoga Springs above what was his grandparent’s gas station and general store where he was raised. Today, Bruchac operates a bookstore in the former general store.

To date, Bruchac has written more than 120 books—picturebooks for young children and young adult books. Much of the content of his stories comes from the history his the Abenki people or the greater cultural heritage of Native Americans. Bruchac’s grandparents nurtured his love of books and the natural world while also sheltering him as much as possible from dangers associated with being a Native American. His book, Bowman’s Store: A Journey To Myself is a good read to learn about Bruchac’s personal story but also because it weaves Native American themes and knowledge of the cultures throughout the book.

Bruchac’s heritage is a combination of Nulhegan Abenaki Native American, Slovak and English. He is proud of his Native American heritage and his place as a respected elder within his tribe. When asked if he has ever experienced prejudice as a Native American, Bruchac responds, “Only so far as people believing that what you say or what you feel is not real.” This telling statement about the sting of being disregarded implies that we need more discussions on what prejudice looks like. The sentiment expressed by Bruchac reminds us that often prejudice towards others can be subtle actions and not always overt.

Bruchac completed most of his formal education in New York state. He completed his undergraduate education at Cornell University. He originally chose to pursue a degree in wildlife conservation but eventually changed his major to English with a minor in zoology. He earned a master’s degree in literature and creative writing from Syracuse University and a Ph.D. in comparative literature from the Union Institute in Ohio.

Storyteller, Writer and Musician
Bruchac comes by being a professional storyteller naturally. He says he “grew up telling stories” because he “did not get a television until fourth grade.” Most of his stories come from folklore—traditional Adirondacks tales and Native Americans tales of the Northeastern Woodlands. Bruchac routinely performs storytelling at festivals, conferences and schools. As a storyteller, he has performed widely in Europe and the United States. He has even been a draw at the British Storytelling Festival and the U.S. National Storytelling Festival held in Jonesboro, Tennessee. Also, he has been a storyteller-in-residence for multiple Native American organizations that includes a residency at the Institute of Alaska Native Arts and the Onondaga Nation School.

Two aspects helped shape Bruchac as a storyteller. One reason Bruchac was drawn to storytelling comes from the understanding that many Native Americans have been made to have what he calls a “feeling of shame” about their heritage. Bruchac believes that Native Americans have not been fairly portrayed in the stories he remembers growing up or that he could find for his own children. Bruchac says that he “has devoted a large portion of his life to writing, storytelling and working with children in order to make marginalized Native American cultures understood and respected.” This statement connects to his belief that storytellers have a responsibility to improve society through their storytelling.

Telling and writing stories is part of who he is as a person. One of his loves in life is writing poetry. He was already writing poetry by the second grade though it was not until he attended Cornell that he began publishing his poetry in the student newspaper named the Trojan Horse.

A hiccup in Bruchac’s storytelling occurred when he initially tried getting his work published. Getting published was not easy for Bruchac; therefore, he and his late wife launched the Greenfield Review Press (GRP). GRP was committed to publishing material for people who could not traditionally get published. In 1969, at the time of the publisher’s launch, many marginalized people had a hard time getting published. With the help of GRP, prisoners, women, African Americans, Native Americans and Asian American were offered a place to publish. GRP published multicultural poetry and stories for more than twenty years.

Bruchac says he is drawn to music and interweaves it into his storytelling. He often plays his flute while presenting in any format. He has played the flute for 50 years. For our conversation with the UArizona students, Bruchac finished by playing a Carlos Nakai song on his flute. Nakai is a well-known Navajo musician.

Connecting to the Classroom 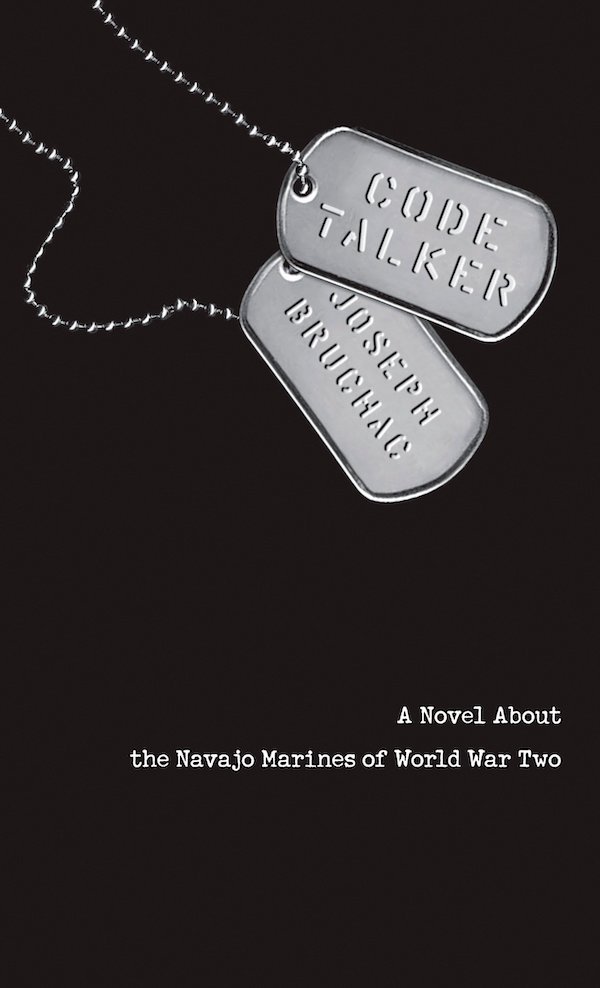 An abundance of books work to create discussion around Joseph Bruchac’s storytelling in the classroom. These include Code Talkers, Skeleton Man, Dog School, Two Roads, Sacajawea, or his newest book, Rez Dogs. Many of Bruchac’s books can be used across the curriculum. Almost all the books can be used in language arts, social studies, science, math and/or creative arts. Code Talkers connects with WWII content and Native American culture, Skeleton Man can be used for a science anatomy lesson or a language arts folklore lesson. The story is also a mystery that lends itself to deductive reasoning, and lessons on inferences, and flashback. Dog School is written in verse, which lends itself to a language arts lesson on the poetry genre.

Connecting Bruchac’s Books to the Community
Bruchac’s books can be used in many types of cultural days but also several his books could open discussions with children who have experienced trauma. His newest book, Rez Dogs thematically deals with isolation and takes place during COVID-19 shelter in place. Rez Dogs can be used by teachers, school counselors, parents or other adults that typically interact with children. 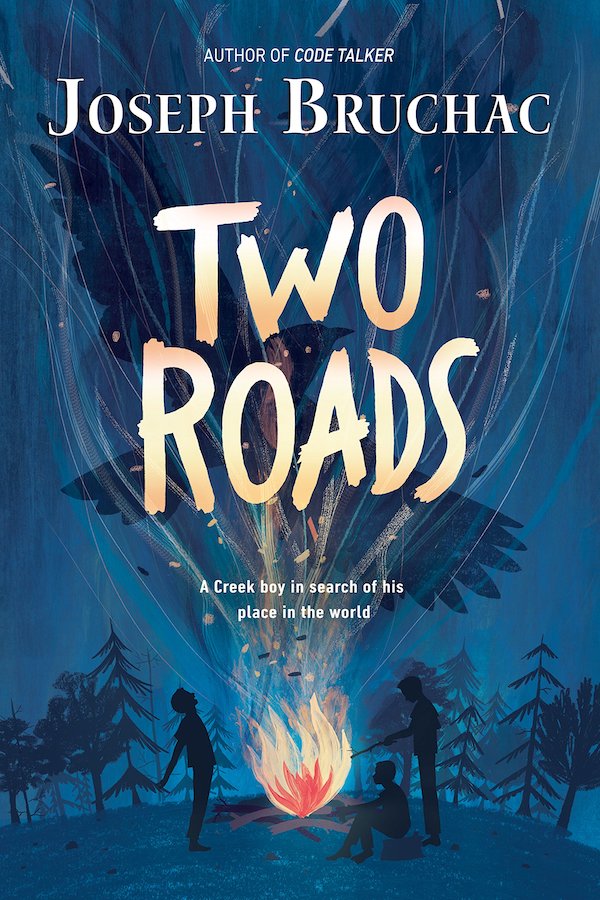 When Bruchac speaks about his process of writing, he explicitly points out that all writers should take part in listening to and telling stories as well as writing. Bruchac says that the “Creator gave us two ears and one mouth” because “we should listen more.” He stresses that writers and storytellers must first and foremost, listen to others and the natural world before they write. When it comes time for an individual to write, Bruchac has two points of advice: “write a lot” and “revise even more than you write.”

Bruchac’s daily process usually begins with a general overview of what he wants to write when he sits down to work for the day but not an outline or specifics. Before he begins to write, he walks his dog. In the last several years, part of his process changed alongside advances in technology. When he walks his dog these days, he dictates stories into his phone. He dictated Rez Dogs over the course of many morning walks, and then transferred the audio into a document. When he is not working on a story, he dictates at least one poem on these walks.

Bruchac says that he makes a practice of sitting down each morning and trying to write for at least several hours. He simply “turns on the computer and starts writing.” Some days are more successful than others. For instance, an especially successful day’s work occurred when he sat down to write Skeleton Man. He wrote the first day for eight hours straight and the book’s first draft was completed in five days. However, all of his writing does not come that easily. For instance, Bruchac learned to keep a journal or phone beside his bed to write or record dreams when he wakes up in the middle of the night. If he does not write his thoughts down or dictate them, he will not remember when he wakes.

Content of Books
Bruchac shares his process with students, but he also discusses the content of his stories. Bruchac almost exclusively writes about Native Americans because he is unhappy with the portrayals he reads. Growing up, Bruchac says he typically only saw two types of Native Americans portrayed — either a noble but vanishing red man or as a murdering savage.

Other reasons Bruchac writes almost exclusively about Native Americans is because he stills sees needed change with government policies toward Native Americans. Bruchac provides several examples of wrongful Native American treatment in this country. For instance, during WWII almost all code talkers had been taken from their families as children and sent to boarding school to Americanized them and lose their language. However, the Navajo language ended up being a huge advantage to America military forces during the war. Canada also had residential schools, and in the past two years mass graves have been located at several of those schools. For years when the schools were in use, students complained that other students would disappear. Social services in general have not been good to Native Americans with different types of forced adoption. Bruchac says that he was taught never to announce himself as a Native American because of “well-intended” whites who assume they know what is best for Native Americans. The idea that white Americans know best is a common theme to Native Americans. Bruchac address his frustration with the intellectual colonialism of the way Native Americans are treated by saying to be wary, “when someone else thinks they know what’s better for you.” 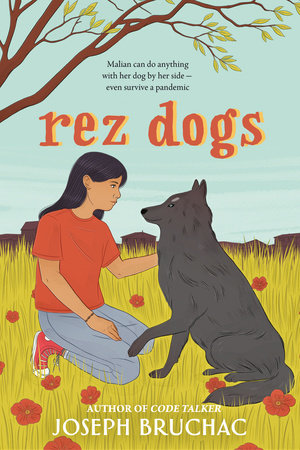 The story of Rez Dogs came about during COVID-19 and deals with the theme of isolation. In the story, Malian is a Wabanaki Native American who is quarantined on her grandparents’ reservation. While in quarantine, a local dog becomes her best friend and companion. She does not go outside to play with friends, she helps her grandparents use video chat, and she listens to and learns from their stories. The novel set during the pandemic highlights the ways Malian’s community cares for one another through epidemics of the past, and how they continue to care for each other during the pandemic.

Authors’ Corner is a periodic profile featured on our blog where authors discuss their writing process and the importance of school visits. Worlds of Words frequently hosts these authors for events in the collection. To find out when we are hosting an author, check out our events page. Journey through Worlds of Words during our open reading hours: Monday-Friday, 9 a.m. to 5 p.m.