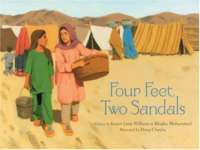 When relief workers bring used clothing to the refugee camp, everyone scrambles to grab whatever they can. Ten-year-old Lina is thrilled when she finds a sandal that fits her foot perfectly, until she sees that another girl has the matching shoe. Soon Lina and Feroza meet, each wearing one coveted sandal. Together they solve the problem of having four feet and two sandals. As the girls go about their routines – washing clothes in the river, waiting in long lines for water, and watching for their names to appear on the list to go to America – the sandals remind them that friendship is what is most important.