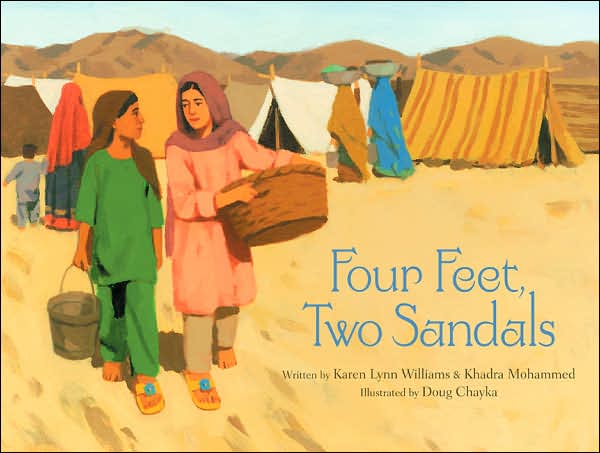 Ten-year-old Lina and her mother live in a refugee camp on the Afghanistan-Pakistan border while they wait for the opportunity to immigrate to America. When workers bring clothing to the camp, Lina manages to grab a new yellow sandal with a blue flower. She slips it on her foot, the first shoes she’s worn in two years, while she looks for the other one. She finds the matching sandal on the foot of another young girl, Feroza. Feroza sees Lina, turns, and leaves with her one sandal. The two girls meet the next day at the stream and after some initial tension over the sandals, Lina suggests they share them, each wearing them on alternate days. Lina comments, “Four feet, two sandals.” Lina and Feroza soon become close friends. They learn about the struggles and tragedies they have each experienced and share their hopes and dreams. When Lina’s family hears they will be leaving for America, Lina tells Feroza to keep the sandals because her mother has bought her shoes for the trip. But, as Lina boards the bus, Feroza runs up and gives her back a sandal. “It is good to remember. Four feet, two sandals,” she says.

This touching story is based on Khadra Mohammed’s experiences working with refugees in Peshawar on the Afghanistan-Pakistan border. The two authors were inspired to write the book when a young girl they were working with at a refugee center in Pittsburgh asked why there weren’t any books about children like her. As readers get to know Lina and Feroza they learn the realities of life for children in refugee camps, from daily chores to schools only boys can attend to struggles to obtain the supplies they need. It is a powerful story of friendship and overcoming separation and loss that will linger in readers’ memories. An Author’s Note gives added information about refugees.

Doug Chayka’s illustrations realistically depict the culture, camp conditions, and emotions of the refugees. The desert setting and camp are painted in muted earth tones that convey the dullness of the girls’ lives while the characters are dressed in bright colors. Their bright blues, greens, and pinks make them stand out, highlighting their humanness and hopes and bringing to light the realities of life in refugee camps. Chayka’s use of quick broad brush strokes in simplified sketches that lack details reflect the simple and temporary life of the refugees who long for a more permanent life.

In a text set on the experiences of refugees and their inner strength and hope, this book would work well with Brothers in Hope: The Story of the Lost Boys of Sudan (Mary Williams, 2005), the story of orphaned boys who travel hundreds of miles to safety after a civil war breaks out in their home country of Sudan. The Whispering Cloth: A Refugee’s Story (Pegi D. Shea, 1996), the story of a Hmong refugee girl who creates a pa’ndau, a traditional story cloth, to document her personal story and memories, would also work well in this text set.