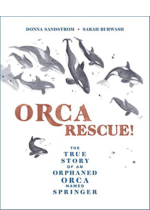 A captivating account of the only successful orca rescue and reunion in history told in first person by Donna Sandstrom, a citizen participant of the rescue.In 2002, a young orca was spotted alone in Puget Sound near Seattle — lost, underweight and 300 miles away from her home waters in Canada. Donna Sandstrom, an orca enthusiast in Seattle, eagerly joined the volunteer effort to help. Here she tells the riveting story, from identifying the orca as a missing calf named Springer; through making the decision to try to transport her home; to planning and organizing the trip; to, finally, releasing her near Vancouver Island, where Springer was reunited with her family.