Going beyond the story of America as a country “discovered” by a few brave men in the “New World,” Indigenous human rights advocate Roxanne Dunbar-Ortiz reveals the roles that settler colonialism and policies of American Indian genocide played in forming our national identity. The original academic text is fully adapted by renowned curriculum experts Debbie Reese and Jean Mendoza, for middle-grade and young adult readers to include discussion topics, archival images, original maps, recommendations for further reading, and other materials to encourage students, teachers, and general readers to think critically about their own place in history.

Follows Papa and his granddaughter as they spend another Thursday together. 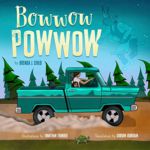 When Uncle and Windy Girl attend a powwow, Windy watches the dancers and listens to the singers. She eats tasty food and joins family and friends around the campfire. Later, Windy falls asleep under the stars. Uncle’s stories inspire visions in her head: a bowwow powwow, where all the dancers are dogs. In these magical scenes, Windy sees veterans in a Grand Entry, and a visiting drum group, and traditional dancers, grass dancers, and jingle-dress dancers–all with telltale ears and paws and tails. All celebrating in song and dance. All attesting to the wonder of the powwow.

Apple Starkington turned her back on her Native American heritage the moment she was called a racial slur for someone of white and Indian descent, not that she really even knew how to be an Indian in the first place. Too bad the white world doesn’t accept her either. And so begins her quirky habits to gain acceptance. Apple’s name, chosen by her Indian mother on her deathbed, has a double meaning: treasured apple of my eye, but also the negative connotation a person who is red, or Indian, on the outside, but white on the inside. After her wealthy father gives her the boot one summer, Apple reluctantly agrees to visit her Native American relatives on the Turtle Mountain Indian Reservation in northern North Dakota for the first time. Apple learns to deal with the culture shock of Indian customs and the Native Michif language, while she tries to find a connection to her dead mother. She also has to deal with a vengeful Indian man who loved her mother in high school but now hates Apple because her mom married a white man. Bouncing in the middle of two cultures, Apple meets her Indian relatives, shatters Indian stereotypes, and learns what it means to find her place in a world divided by color.

The story of a ginkgo tree’s experiences as it grows outside an apartment building.

This gorgeously illustrated picture book tells the story of a young Japanese boy who loses his dad in a tsunami.

It is 1899. Ten year old Samkad thinks he knows everything about the world. He knows that home is in the mountains. He knows who his friends and his enemies are. And he knows that he will grow up to become a warrior like his dad, with his own shield, spear and axe. His best friend is Little Luki and she too wants to become a warrior – though there’s little chance of that because she is just a girl. Then strangers arrive: a boy with many languages in his throat and weird-looking men called Americans who bring war and death. Set during the U.S. invasion of the Philippines.

A young woman gets on the bus and rides out of the big city. She arrives in the countryside, where she is as big as a giant, looming over a tiny house, a garden and her tiny grandmother. The cabbages and the apple trees are far below. Her grandmother smiles up at her in her yellow hat. The young woman bends down to give her little grandmother a big kiss, and then she smells her grandmother’s cooking. She has returned home. When they sit down at the table, the young woman has shrunk to a child-like size, and the two share a meal together in the garden. In this gentle, wordless story Natalia Chernysheva beautifully captures the feelings of coming home to comfort and memories and of returning to our childlike selves.

When a Mongolian elder named Gree Shrek hunts a female moose by mistake, her young calf is left behind. Saddened by her loss, Gree Shrek names the calf Xiao Han (“Little Moose”) and the moose and man form an authentic attachment. Xiao Han accompanies Gree Shrek as the hunter-gatherer herds reindeer, sets up camp, forages for food in the forest, and visits his peoples’ village, where many fun adventures happen. But as the little moose grows bigger, Gree Shrek knows he must return his companion to the forest. Richly detailed, painterly illustrations by Chinese fine artist Jiu’er bring authenticity and beauty to this thoughtful book, which illuminates the traditional and vanishing way of life for the Ewenki peoples of Inner Mongolia.