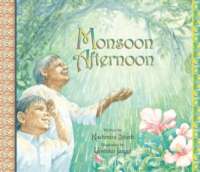 This charming picture book depicts a rainy afternoon in a modern Indian town. The young, un-named protagonist is looking for someone to play with in the rain. He asks the members of his family (Dadima (grandmother), Mommy, Papa, and brother Jai to come outside and play with him, but no one can. When asked by his Dadaji (grandfather) why he looks so sad, he says “No one wants to go outside and play with me.” His Dadaji responds “Are you sure?” and thus begins an afternoon adventure beautifully illustrated in soft watercolors. Dadaji and he fold boats out of paper, and take them outside to the washtub filled with water. As the rain lets up they explore the neighborhood and the young boy asks his Dadaji about his own life as a boy. As the grandfather remembers his own childhood, the illustrations change to sepia to indicate the past, embedded in the soft pastel present.

The two walk through the neighborhood and see and do many things. Peacocks catch their eyes. They swing in the banyan trees. They find mango trees and pick mangoes to bring home. They return home with the mangoes they have picked and go into the house to change out of their wet clothing, only to be reprimanded by Dadima for tracking mud through the house. As they clean up the mess they have made, the young boy asks his Dadaji, “Did your dadima scold you and make you clean up?” Of course, the answer is “She sure did.” Thus the intergenerational bond is maintained.

Monsoon Afternoon is a luscious journey into the life of a young boy living in modern India. The illustrations show a modern home. For example, in one illustration the reader sees a room with the father working at a desk with a computer. The book was shown to a cultural insider who confirmed both the text’s and the illustration’s cultural authenticity. Kasmira Sheth, the author, was born in Bhavangar, India and raised in Mumbai until the age of seventeen when she came to the United States to study at the Iowa State University. Trained as a microbiologist, she worked in the field until an uncle from India sent her a letter recalling his childhood. This letter was the impetus for her to begin writing for children. She claims she learned to write by reading good children’s literature to her two daughters.

Although the book is set in India during monsoon season, children of many geographical locals will relate to the concept of “waiting for the rain” and the joy of playing outside when the rain arrives. Children who are fortunate enough to have loving relationships with older adults will respond favorably to the interaction between the young boy and his grandfather. Other books on the common experience of waiting for and playing in the rain, such as Bringing the Rain to Kapiti Plain (Verna Aardema, 1981), Come On, Rain (Karen Hesse, 1999) and Rain, Rain, Rivers (Uri Shulevitz, 2006) can be put together. Books like The Two of Them (Aliki,1987), Storm in the Night (Mary Stoltz, 1987) and First One Foot, Now Another (Tomie de Paola, 1981) recall the special bonds between grandchild and grandfather.

WOW Review, Volume III, Issue 1 by World of Words is licensed under a Creative Commons Attribution-NonCommercial-ShareAlike 4.0 International License. Based on work at https://wowlit.org/on-line-publications/review/iii-1/