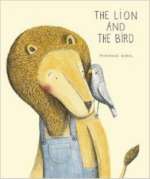 But winter doesn’t feel all that cold with a friend (p. 28)

It comes as no surprise that The Lion and the Bird recently landed itself on the Outstanding International Book award list for 2015. Marianne Dubuc carefully and gently tells the story of a lion and a bird who circumstantially become friends. The lion is busying himself with yardwork when he realizes the bird has a hurt wing. Lion’s tender nature as he bandages the bird is the beginning of a sweet and kind friendship. The bird is unable to fly south for the winter and lion gladly welcomes the bird into his home. The lion makes a place for the bird in each part of his life and keeps the bird warm in winter both literally and figuratively. When spring comes and the other birds return, lion is filled with deep sadness as his friend must go. And he waits, and waits to see if his friend will return again in the winter.

Particularly striking is the way Dubuc’s words and illustrations gracefully intertwine to tell the story. Many pages are wordless, yet they advance our understanding of the lion, the bird, their friendship, and particularly the passage of time. The way Dubuc shows the characters’ emotions through the illustrations and the simplicity of the text is remarkable. While Dubuc and her work originate in Quebec, there are no particular markers of race, gender, or ethnicity in this text. However, the characters clearly exist in a geographical place that has four seasons and this contributes to the reader’s understanding of the passage of time and the characters living in a more northern region.

The Lion and the Mouse could stand alone as an exemplar text particularly to mentor students in the pairing of text and illustrations and on depicting friendship, kindness, and building relationships. Students in first through fourth grade would enjoy this text, but deeper understandings and themes present in the text make it appropriate for older students as well. The book could be paired with Jerry Pinkney’s beautifully illustrated The Lion and the Mouse (2009) for the gentle depiction of the lion as well as the meaning of kindness and friendship. Owen & Mzee: The True Story of a Remarkable Friendship (Hatloff, 2006) is an informational text about two animals that create an unlikely bond and friendship. This true story demonstrates many of the same themes, such as friendship and kindness.

Marianne Dubuc is a trained graphic designer from the University of Quebec in Montreal. She has become an international author and illustrator, with books published in more than 13 countries. Her books include The Sea (2012), The Bus Ride (2015), Animal Masquerade (2012), and In Front of the House (2010). In 2014, the Canada Council for the Arts awarded Dubuc a Governor General’s Literacy Award and her book In Front of My House (2010) was a nominee for the German Youth Literature Award. More about Dubuc can be found on the her website and on her blog.

WOW Review, Volume VIII, Issue 1 by Worlds of Words is licensed under a Creative Commons Attribution-NonCommercial-ShareAlike 4.0 International License. Based on work at https://wowlit.org/on-line-publications/review/viii-3/